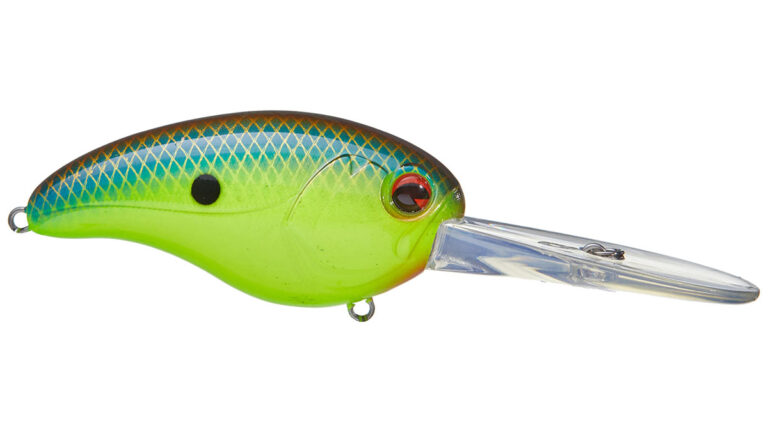 We’ve all heard the term walk the dog in fishing circles. But not all dogs walk the same. My dog Lacey for instance loves to root around in the bushes and trees, often getting her line tangled up in the process, spending some afternoons on a short leash in a thunderstorm because of her inability to get her line in and out of the cover well. I’ve got some crankbaits like that too. Granted when we talk about walking the dog, we’re usually reserving that for topwater lures, but what if you could find a dog that would hunt through cover under the water without getting its nose hung in brush all the time.

That’s a pretty difficult task for crankbaits given that there are generally six hook points swinging around under and behind the bait as it wildly ricochets off objects under the water. The last several years crankbait makers have done a good job of producing crankbaits that can deflect and maneuver around hard objects. But it’s those softer pieces of cover like brush piles and submerged vegetation that often cause problems for crankers.

The new Ima Beast Hunter was created to combat those situations. The crankbait at first glance looks like any ordinary deep diver on the market. It has several great looking colors, unique from many other available crankbaits, but how it looks is not its appeal. A rounded narrow lip and slighter diving angle than many popular deep divers, serves to do two things. One it will keep the bait from diving as deep obviously, but it also will change how it dives.

So conceptually the bait was designed with some unique elements, but as is the case with any fishing lure, the bass are the best testers in the market. My first test with the lures was while fishing with FLW Tour and OFF pro Terry Bolton. We were fishing a lake full of man-made brush piles, some that were mere feet from the surface they were so large.

I would make a long cast past the pile and then start “worming” my crankbait over the cover. This is a very deadly technique for anglers with the patience to try it. Amazingly, the crankbait crawled over the piles with ease. I can honestly say I did not get the bait hung a single time. Maybe that was just luck. But I like to think it was a matter of the right tool for the right application.

I fished the bait on a Denali Jadewood Medium-Heavy Crankbait rod, with a Lew’s Tournament Pro 5.4:1 reel and 12-pound Sunline Super Natural monofilament. It accounted for several bass on that outing and has yielded bass on several occasions since then.

The Beast Hunter casts a mile thanks to a compact 2 3/4-inch body and a heavy 3/4-ounce weight.  The thick side walls keep it balanced well and also help it to stop when you contact cover and not continue to glide forward. The medium wobble and tacky sharp hooks stick fish well, but we found the front hook will occasionally hang up in the eye socket of the crankbait, something to be mindful of when you cast. The baits come in six colors.

Does this crankbait replace all the others in your tackle box, absolutely not. There are times you will want a faster, deeper diving crankbait. There are other colors you will want. There are tons of reasons to have many other crankbaits. This is simply a better tool at times for certain brushy applications. They retail for $15.99 so we’ll have a few in the box in some proven colors like Blue Sexy Shad, Bluegill and maybe Silver Lining.

To see more about these baits or order, visit Tacklewarehouse.com.