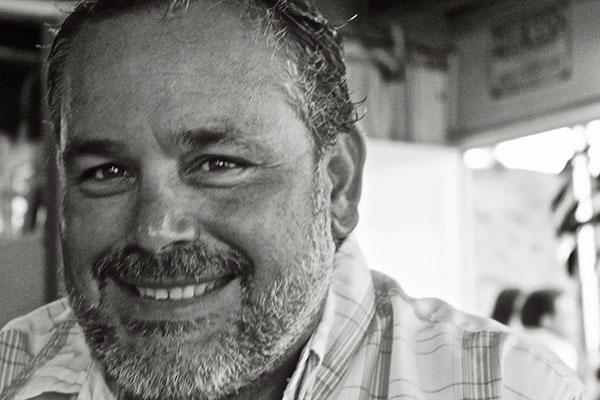 “But there’s this one particular harbourâ€¦”

To be honest, I had my doubts,

and his 787 Fishing charter service.

Not really sure about the big man in the small boat,

yet my friend Terri at Costa Del Mar spoke very highly about him,

yet Dr. Mac said he was the best,

but I wasn’t buying it,

until I took this picture,

of Captain Marcos Hanke leaning over the gunwale of his boat,

In 30 years of writing and picture taking I have taken probably tens of thousands of photographs, I may, MAY remember a handful of those snaps.

This, this shot, will be one I will always, remember.

Pretty much, all of nature, beat us here.

Let’s say you believe those who study things like this â€¦ Earth â€¦ US â€¦ if you believe science, we humans have at the outmost been walking around here for 160,000 years or so,

but in the grand scheme of things, we have been on Earth 0.003% percent of the time Earth has been floating in space.

Make it easierâ€¦ stretch out your arms, side to side, okay, between your right and left finger tips, is the entire history of our planet.

From your right finger tips to your right wrist, pretty much a mystery to us, so far, as to what was going on with Planet Home.

Wrist to your elbowâ€¦ the one cell things dominated home here.  Oh, and LAND started to get built and grow into something we now call continents.

Dudes, it takes to your right shoulder before we get OXYGEN here on Earth.

Up and over your head to your left shoulder, two cell things become dominant, dinosaursâ€¦ dudesâ€¦ T-REX doesn’t even show up until your left knuckles.

So in the how-long-your-arms-are-calendar-of-Earth measuring stick, where are we, when do we show up,

where your fingernail beginsâ€¦ nope,

in the wingspan of Earth, dudes this is us,

if you file down your nails, that STUFF on the nail fileâ€¦that’s human history on Earth.

â€¦ because this has been their planet for 418 million, 840 thousand YEARS, before we even got here.

Look it up, it’s called the Devonian Period, or, the Age Of Fish,

the Age of Humans won’t happen until we at least make it to,

Originally from Brazil, has a B.A. in Marine Biology from the University of Puerto Rico (1995), been guiding since 1990.

“I started my business by guiding fly fishing from the shore.”

Marcos (I’m just going to call him Marcos from here on in, not out of disrespect, but mainly because it is just shorter to have to type than always adding the Captain title) is on the water about 300 days a year guiding and taking his 2 young daughters fishing.

“I want my girls to know and love the sea.  If 3 and 6 year olds can respect the sea and animals, like they do, why can’t we adults.”

I think, Marcos, that for some reason, there are amongst us adults here, people who even if they lived on a planet made entirely of kindling, would still light a match.

And then Marcos said something all guides should print on their guide business tee-shirts, “I try and respect the sea and conduct myself in a good manner.”

Don’t do that you guides out there, and soon you will be guiding squat.

Guides, whether you think so or not, you and what you do, is a sport. It is NOT a business to put “the client on fish.”

The sea, is your competitor.

The fish, are your competitors.

The beauty of sport, is the respect shown to those that you compete againstâ€¦ in your case, the fish.

A personal aside here with the obligatory “blah blah blah” about this not being the opinions of Wired2Fish or anyone within spitting distance of the online joint.

So from me/not them here’s this: I found out during this adventure that there is some sort of custom that has arisen that calls for the angler who catches his/her first tarpon to “take a scale from the fish to mark the occasion.”

If you do that and I’m on the boat, you’re going into the water, and I’ll throw you there myself.

Unless, you allow me this, we have a contest, competition between me and you, a story writing competition, if you win I will put it up everywhere you are a better writer than I am,

if in fact I win,

a large piece of your skin.

To take ANYTHING, especially a body part, from whom you have competed against and won is NOTHING MORE THAN BARBARIC BRUTALITY.

We humans are made of bits of land,

with a whole lot of sea mixed in.

Marcos, I believe, has a bit more sea mixed in than most of us.

“I see things out there,” we are sitting on a dock doing the interview and he nods towards the sea. “As if it were a painting.”

“In the mornings when I’m out catching baitfish I go to this area near a beach and I sometimes just sit out there on the ocean and watch the painting on the shore.”

“The painting it is that of the footprints of the Leatherback turtles, I can see on the canvas, the beach, I can see the big footprints coming out of the ocean and going up to the nest, and then back out to the sea.”

“In another part of the painting I can see the tiny little footprints leave the nest, and disappear in the sea.”

“Around them, if they could actually see what it is they are looking at, all around them are the footprints of ancient 800-pound turtles, and little baby turtles, coming and going from a thousand year old turtle nesting ground.”

“It is a privilege for me to see the whole dynamic painting.”

What future do we have if we cannot even see the footprints of what came before us.

It is the wings of the hummingbird, which start the wind.

It is the feet of the paddling turtle, which start the waves,

which makes the beach,

which lets us leave,

footprints in the sand.

“â€¦that no doctor could prescribe.”