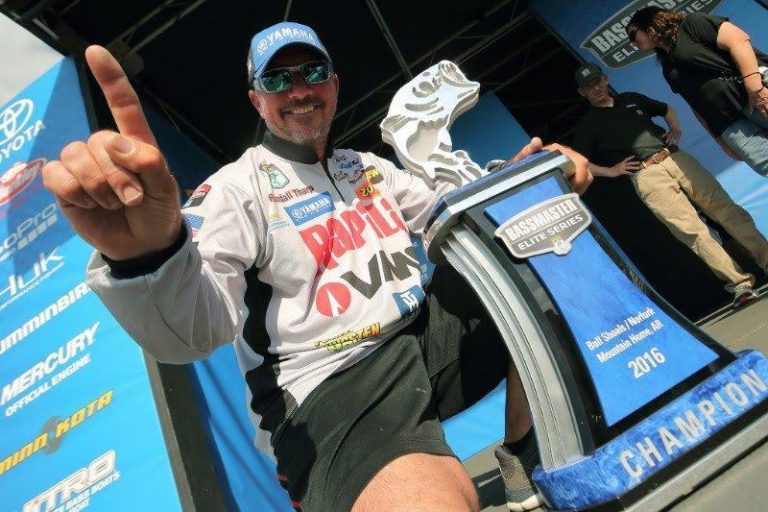 The tournament format was complicated.

It was one event on two lakes over the course of four days.

But through all of the shifting and changing, Florida pro Randall Tharp decided to keep things simple — and that stay-the-course approach ultimately led to a victory in the Bassmaster Elite at Bull Shoals/Norfork.

Tharp used a 4×4 Jig — the Randall Tharp Signature series that he designed for the company — in the golden craw color pattern with a green pumpkin Zoom Big Salty Chunk to catch his fish all four days.

“When I got here, I wanted to find one pattern that would work on both lakes,” Tharp said. “Both of these lakes are Ozark Lakes, and they’re very, very similar. That’s the game plan I wanted to have. It just took me three days of practice to figure it out.”

Tharp said he discovered the key to winning on the third day of practice and really dialed it on the fourth and final practice day, which he spent at Norfork.

On the first day of the tournament, he caught 15-8 on Norfork to put himself in fifth place. He didn’t fare quite as well on the second day of the event at Bull Shoals, catching only 13-12. But he made a slight adjustment the next day on Bull Shoals — and that may have been the key to his winning the tournament.

“I used a 1/2-ounce and a 5/8-ounce version of the jig this week, but the majority of the fish I weighed in came on the bigger one,” Tharp said. “I had one fish in the boat Saturday, and I just kept thinking they wanted something quicker. That’s why I went to the bigger jig.”

Tharp’s Saturday catch of 16-4 pushed him into the lead going into Sunday’s finale on Norfork. He landed 16-2 Sunday to stay ahead of a Top 12 that was separated by only 4 pounds coming into the day.

“Just about everything I caught all week came from 5 feet of water of less,” he said. “The whole stringer that I weighed in today probably came from 2 feet or less.”

Though bass were spawning on both lakes, Tharp said he wasn’t sight fishing for bedding fish.

“I was just looking for crevices in rocks — shady places,” he said. “I was looking for isolated stuff that was different, whether it was a stump or a laydown or whatever.

“If there was a whole bunch of cover, it usually wasn’t all that good. I just keyed on little turns or isolated boulders — stuff that stood out.”

Tharp was already a three-time winner on the Bass Pro Shops Bassmaster Opens circuit, but Sundaymarked his first time to raise the coveted blue trophy awarded to winners on the Bassmaster Elite Series. The $103,000 he received for first place pushed his career earnings with B.A.S.S. to $493,457.

Last year’s Elite Series season was one of the toughest of Tharp’s professional career. He earned checks in only two of the eight regular-season events and failed to qualify for the Toyota Bassmaster Angler of the Year Championship or the GEICO Bassmaster Classic presented by GoPro.
But so far this season, he’s made up for all that went wrong.

Tharp finished 11th in the 2016 Elite Series opener on the St. Johns River in his home state of Florida and 16th in the second tournament of the season earlier this month on South Carolina’s Winyah Bay. His victory Sunday vaulted him into first place in the Angler of the Year standings.

“Before last year, two bad tournaments in a row was the longest bad stretch I’d ever had,” Tharp said. “For some reason, I just couldn’t put two good days together.

“Maybe I got all of my bad days out of the way, because I have yet to have one this year.”

Tharp was awarded $1,000 for the leading the Toyota Bassmaster Angler of the Year points race at the end of the event.

Tharp also earned the Power-Pole Captain’s Cash award of $1,000 for being the highest-placing angler who is registered and eligible and uses a client-approved product on his boat.

Lowen and Zaldain earned the Livingston Lures Leader Award of $500 for both leading on the second day.

The Big Bass Award of $1,500 was presented to Herren for weighing in the overall biggest bass of the event — a 6-1 largemouth bass.