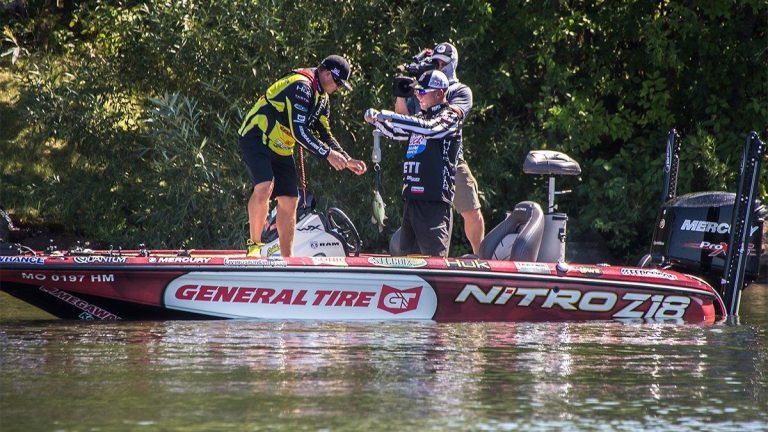 Major League Fishing (MLF) officials announce the creation of its own World Championship event, pitting 12 of the world’s top anglers against one another in televised matches to air on CBS and CBS Sports Network in 2017. The airings will mark the largest and first-ever consecutive six-week bass fishing series to run on national broadcast television, a precedent for the sport.

The MLF General Tire World Championship, presented by Bass Pro Shops, will match MLF’s top 12 Cup anglers against one another in an exciting new format featuring six days of competition and culminating in the crowning of a world champion.

“We are truly excited to have our General Tire brand as the title sponsor of this new championship with Major League Fishing,” said Travis Roffler, director of marketing for General Tire. “The MLF format is already such an entertaining way to watch bass fishing and now this new championship is only going to increase the level of intensity and excitement of the sport.  We can’t wait to get this kicked off and see how it plays out. It’s going to be somewhat stressful for the anglers but really fun for everyone else to watch.”

The six one-hour MLF championship episodes will begin airing Saturday, June 24, 2017, at 2 p.m. EST on CBS, which among its 200 television stations and affiliates reaches nearly every home in the United States.

“This has been a dream of mine since the beginning when conservationist and Bass Pro Shops founder Johnny Morris first asked me what we could do to bring the sport of bass fishing to a broader audience,” said Jim Wilburn, MLF general manager.

“With this new competition and the partnership with CBS, we’re finally achieving that dream and look forward to sharing the sport with an even wider audience than before. Major League Fishing is a trail blazer and this is just one more ground breaking first!”

“We are thrilled to continue our partnership with Major League Fishing,” said Stan Lippelman, Bass Pro Shops vice president of marketing. “We have been a part of MLF since its inception as an innovative new approach to tournament fishing. Major League Fishing has breathed new life into competitive fishing and has quickly built a strong following.  We are excited to partner with them on the World Championship to introduce this exciting format to an even larger national audience with CBS and CBS Sports Network.”

The 12 anglers to compete in the World Championship will be determined according to MLF anglers’ final point standings accumulated from their participation in 2016 and 2017 Cup events. The 12 championship contenders will be announced at the conclusion of the 2017 Challenge Cup in June, the last of the regular MLF events for the year.

MLF was developed specifically with television entertainment in mind, making it a great partner for CBS and CBS Sports Network and the national audience the new shows will reach. The broadened scope with new viewers will benefit not only the show and the anglers, many of whom will be seen by a national audience for the first time, but also the sponsors who are making the event possible.

First developed in 2011 through a partnership between Outdoor Channel and professional anglers, MLF has grown steadily since. In 2015, MLF added a second level of competition with the introduction of its Select events that doubled the scope of the program.

“We always get very excited to air our truly unique, one-of-a-kind, MLF events to an engaged, excited and exponentially growing fan base,” said Jim Liberatore, president and CEO of Outdoor Channel. “Fans are finding out in large numbers: if you have not seen an MLF event, you have not seen the future of bass fishing.”