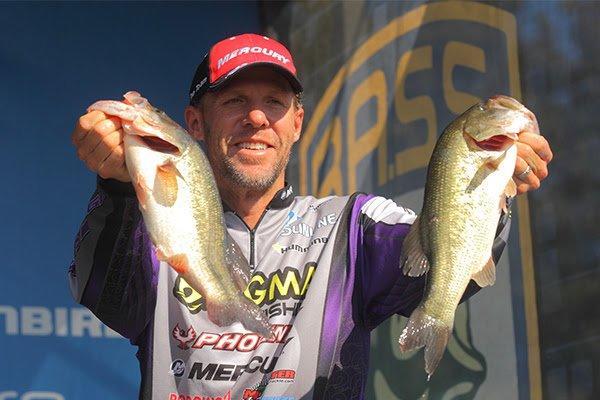 Aaron Martens said he’s exhausted after averaging only four hours of sleep a night since the tournament began, and he’s lost at least four good-size bass this week.

But through it all, he’s put himself in position to score a rare wire-to-wire victory at the Huk Performance Fishing Bassmaster Elite at Chesapeake Bay.

Martens caught five bass that weighed 16 pounds, 5 ounces Saturday and held onto his lead for the third straight day with a total of 48-13.

After entering Saturday’s semifinal round with a lead of only 11 ounces, Martens will begin Championship Sunday with nearly a 5-pound cushion over Indiana angler Bill Lowen (43-14). Alabamians Russ Lane (41-12) and Gerald Swindle (39-15) are next, followed by South Carolina pro Davy Hite (39-13).

“I was panicking a little bit today, all day until the end,” said Martens, who stretched his lead in the Toyota Bassmaster Angler of the Year standings to 69 points over Justin Lucas. “Every day has been like that. It was a nerve-racking day, to say the least.”

Martens caught two “good fish” (any bass weighing 3 pounds or better is considered “good” in this event) early and then pushed closer to a limit with one that weighed only about a pound. Then he lost four heavy bass before finally putting his fourth fish in the boat.

“That makes you kind of jittery,” Martens said. “But once I caught another one, I settled down and started thinking again.”

The razor-sharp barnacles that have been such a problem for the anglers who are fishing dock pilings this week were to blame for some of Martens’ Saturday mishaps. He said he might switch to a bigger line size or even a bigger bait Sunday, but sometimes it’s just can’t be avoided.

“It’s hard to make decisions in the moment when you have a fish yanking on your line,” Martens said. “You want to set the hook hard, but sometimes that just won’t work in these conditions.

Though a 5-pound cushion seems comfortable for a professional angler who has been as consistent as Martens this week, he said he plans to make changes Sunday if the fish don’t cooperate during the first couple of hours. One reason he’s nervous is the consistency of Lowen, who weighed 15-11 Saturday after catching 15-13 Friday.

Lowen said the key to his consistency has been his ability to catch fish on any tide.

“I found a little deal with a boat-lane ditch that’s a little deeper than everything else, and it’s got milfoil on it that’s matted out,” Lowen said. “At high tide, I can catch them over that.

“The area is full of bait, and it’s got stripers and catfish. It’s the cycle of life that’s going on in there. I’m just going through there and picking off the bass I can catch.”

After catching 10 keepers Saturday, Lowen believes there are still plenty of fish in his area.

“I bounced around a lot in there today, just trying to find new areas and let some areas rest for tomorrow,” Lowen said. “I haven’t had any real big bites in there, but hopefully we can get them tomorrow.”

The two Alabama anglers in the Top 5 have also been consistent during a week of fishing when five-bass limits have been hard for many to find.

“I started off strong and caught them steady all day,” Lane said. “I probably caught 20 fish today. I don’t know if there are any giants in there, like I’m going to need to win, but I think there’s definitely the potential for another 14- or 15-pound bag.

“I’ve got it all to myself. I haven’t seen another boat in there all week.”

Swindle caught 14-12 Saturday — his biggest catch of the week — and credited his success to “not thinking too much.”

“When it comes to running the tides and figuring out the tides, I just don’t have time for it,” Swindle said. “That stuff gets in people’s heads. If you were in a place where there was a good pattern you could run, it would be different. But here, there’s just too much dead water in between the good areas.”

So he’s just been fishing anything that looks good.

“I just quit thinking about it,” Swindle said. “If a tree’s sticking up, I flip it. If a tree’s under water, I flip over it.”