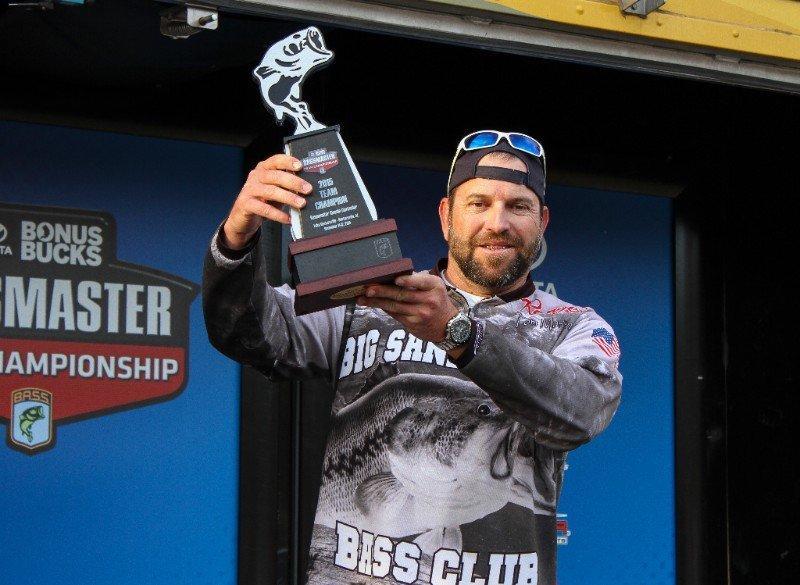 The current he had relied on all week disappeared, and that may have caused him to lose a couple of good fish Saturday morning. He also had to share his best spot with the crowd of recreational fishermen who always flock to Guntersville on the weekends.

But none of it was enough to keep Martens from his biggest accomplishment as a tournament angler.

Martens caught just two fish that weighed 6 pounds, 2 ounces during the morning session of the fish-off. But he rebounded with four giants that weighed 22-12 during the afternoon session and claimed the individual title with a combined weight of 28-14.

The victory earned Martens a berth in the 2016 GEICO Bassmaster Classic presented by GoPro, which is scheduled for March 4-6 on Oklahoma’s Grand Lake O’ the Cherokees.

“We found a bridge in practice that was really good, along with about 20 other boats,” said Martens, who qualified for the fish-off by teaming with fellow Texan Dean Alexander to finish second in the Toyota Bonus Bucks Bassmaster Team Championship earlier this week. “We had to wait in line to get to it during the week, but it was worth it. Then today, there were a lot of crappie anglers there, and I had to go inside of them. But they were great about it.”

Martens used a 7-inch Basstrixx Swimbait in the ayu color pattern to catch the fish he needed to slip past Nickolas LeBrun who finished second with 23-13. That swimbait was the same one used by California pro Skeet Reese to win the Bassmaster Elite Series event held on Guntersville back in April.

“There was no current today, and I had a couple of pull-offs that could have helped,” Martens said. “You could see the fish down there (on an electronic fish finder), and it was just a matter of dropping the bait down to them and waiting for a bite. I was literally getting about one bite an hour.

“I lost another fish this afternoon, and I was afraid that fish was going to be the one that really hurt me.”

The original plan for this week’s Toyota Bonus Bucks Bassmaster Team Championship was for 197 teams to compete Wednesday and Thursday for the national team title, with anglers from the Top 3 teams advancing to fish solo in the Bassmaster Classic fish-off Friday and Saturday.

But after a solid day of fishing in Wednesday’s opening round, the weather threw a kink into everyone’s plans.

Thursday’s second round of the team portion was wiped out by heavy fog in the Guntersville area. That forced the anglers to complete the team competition on Friday. Michigan anglers Chris Risner and Timothy Eaton claimed that team title with a two-day weight of 48-7, ahead of Alexander and Martens (46-10) and LeBrun and Randy Deaver (45-4).

Then instead of fishing the originally scheduled two days for the Classic fish-off, the six remaining anglers fished one day with two four-hour sessions. All anglers were attempting to catch five bass during the morning session and five more during the afternoon.

Saturday’s morning session saw LeBrun jump into the lead with four bass that weighed 12 pounds, 14 ounces. His closest competition was from Risner, who brought three bass to the scales that weighed 10-4.

After a short break, the anglers went back onto the lake at 11 a.m. for the afternoon session. While Martens was working his magic at the bridge, LeBrun was flipping and pitching grass for a modest five-bass limit that weighed 10-15.

“With a lack of current on our main spot, I kind of just went into survival mode,” LeBrun said. “I figured my best chance was to get five fish of some sort and just let the cards fall. So I went and did something that I had confidence in, something I know how to do. That’s how I caught what I caught.

Risner finished third with six fish in the two sessions that weighed 18-2. He was followed by Alexander with 5-7, Deaver with 4-9 and Eaton with 0-0.

Martens said he’s never seen Grand Lake, but he’s looking forward to doing some research on the fishery before he takes on the challenge of fishing the Classic.

“I’ve never even fished in Oklahoma before,” Martens said. “But how much different from Texas can it be? It’ll be a great experienced for sure.”