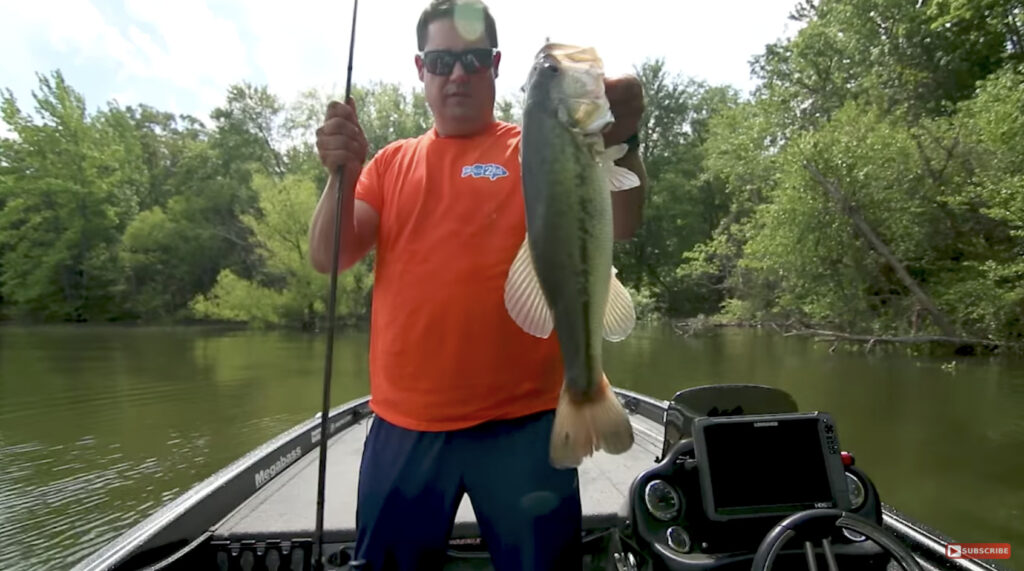 Ask a group of avid bass anglers what way they like to catch bass the best, and a good percentage will tell you flipping and pitching flooded cover. There is just something about those couple of seconds between the bite or realization that a bass has your bait, to you setting the hook where you are imaging the fight that is about to take place with hopefully a big bass. It’s that couple of seconds from bite to hookset that really keeps us begging for more.

While a lot is talked about in the techniques of how to flip and how to pitch and ways to improve those skill sets as well as the tackle and plethora of baits for flipping, pitching and punching, not much is discussed in terms of how to find the fish in a sea of flooded cover when the lake rises, is on the rise or coming back down after cresting in flood conditions.

I had more private messages and emails this year than I could adequately answer when I was catching fishing flipping and pitching when the lake got flooded. I even had a few people accuse me of catching fish out deep and then going back shallow and taking pictures because “they were having a hard time catching them.”

Fortunately I’ve ran a video camera non-stop this year, and when the flipping and pitching was pretty good, I did what many call a “brain dump.”  I basically just rattled off everything I could think of when I’m looking at lots and lots of cover and how I figure out the pitch I need to make, where I think the fish is most likely to setup, what looks like the sweet spot and then how certain banks become better than others in an area as the water levels rise and fall as flood waters crest.

Several key factors determine how productive you will be in a certain area of flooded cover including the following:

Obviously what is flooded is important, but I think anglers get to hung up on figuring out what types of cover the bass are using. I’ve had days where I did catch the majority of the fish out of bushes or out of flooded trees. But more often than not, it’s more about how the cover sets up and how protected a fish feels around any piece of cover more than what the cover is that matters.

As I mentioned in the video, I don’t necessarily start catching them out of one type of cover and abandon all other types, but a lot of the time you will notice because of how the cover lays or how steep or flat the area is will mean that certain types of cover are more prevalent in the right areas than others.  So take the cover in conjunction with the other factors and not just by itself.

How does the cover set up

Good grass anglers learn that their most productive areas in a veritable sea of grass is not because of the grass itself but how it sets up on a harder bottom or a slight rise or depression or varied line of the grass. It’s the features around the grass that make the grass good in that area.  Same with fishing flooded cover. Most of the time, you’re talking about flooded wood cover like laydowns, standing trees, bushes, vines and other types of woody hiding spots that are now usable by a bass when the water rises.

I often find that when I hit little stretches where all the sudden you get a bunch of bites in a row, it’s because the cover along that bank has changed or gotten some how different than all the other stuff in a larger area. Maybe the bottom got a harder bottom composition like sand or gravel. Maybe the bank got steeper and now the fish can’t get as far back into the cover. Maybe the water is falling and now they are coming out to the edges of the last bit of cover that is flooded.

But I often find where the cover gets a bit denser, or maybe you have a few bushes next to standing trees, or these trees are on the side of a pocket instead of the very back of the pocket and the fish don’t want to go all the way back with water falling or because it’s summer and they just want to slide up into the cover and move back out. 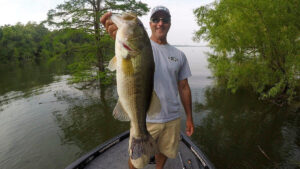 Steepness of the banks

This is one of the more critical factors for me in just being efficient. The biggest thing is I try to to fish areas where I can sample most of the cover and get an idea for how the fish are setup. If the bank is flatter and the water rises a bunch, the water will go so far back into the trees, that you can’t get a boat or a lure back to where the fish might go.

So I will look for more areas where I can make a long pitch and make it to a dry bank. Or maybe I will focus my efforts along a steeper bank where the cover doesn’t flood as far back. Or I will focus on something like a creek channel going into the very back that has a defined edge of where the cover starts and stops. All are good options when trying to break water down quickly and feel that you are being efficient fishing all the cover.

The general rules for bass fishing rising and falling water are as follows:

Those are general guidelines. One precaution I would give is that fish don’t always get the memo as fast as we do about rising and falling water. Just because the water went up 2 feet today, doesn’t mean the bass went as far back into it as they can. It does seem that they sense falling water a little quicker though.

I have seen summer fishing change overnight, where you were catching them out deep one day, and the next day they got super shallow in flooded cover you would have never guess bass were using in July. It’s crazy how a rising water level like that, especially if the rain is a lot cooler will draw fish into it quickly.

I think one the best times to fish flooded cover is after it has been really high, and it starts receding. I think it puts the fish in very predictable places, like the outside trees and bushes that you can reach a lot easier. In other words, the last pieces of cover to have water on them when the water comes all the way down.

Obviously seasonal patterns will also help you predict what areas and what flooded cover is going to be the most productive. If it’s around the spawn, you probably want to look in the backs of pockets, coves and creeks for flooded cover on banks that have the right substrate for spawning (i.e. sand, gravel, hard cover in other wise muddy silted flats).

If the shad are spawning, some of the shallowest cover in the area can suddenly get good. If it’s summer or winter, rising water can signal temperature changes and draw fish from deep water into relatively shallow water. So you might focus your efforts where flooded cover is close to deep water access.

But I’ve seen fish show up in very shallow places in times you wouldn’t think they should be there because the water rose suddenly with heavy rains.

I think if you take all the factors together, you can piece it together a lot faster. People here that bass are getting caught out of the bushes and they only go flip bushes. Well not all bushes are going to be setup right. In one cove, the trees might be better than the bushes. In the next because the bottom composition and steepness changed, the bushes suddenly are the dominant fish-holding cover. But most importantly, look at the cover as a whole and determine what is the hardest place to get into that a bass will feel the safest. Often times, that is where you will find the biggest bass hiding.