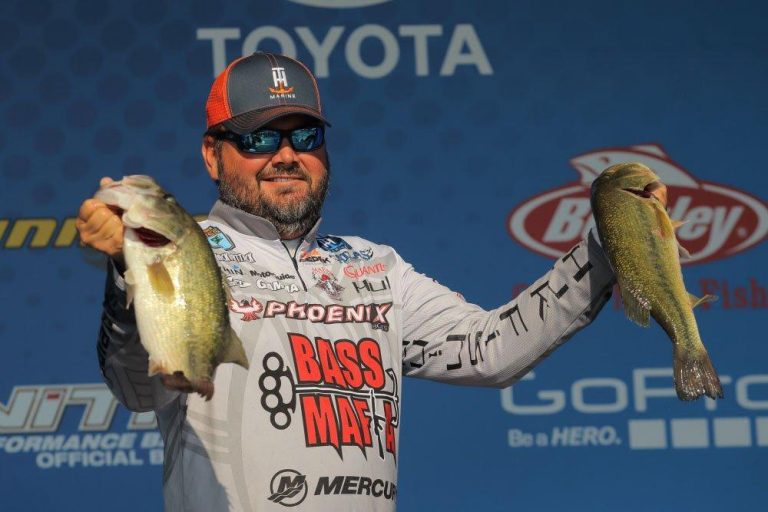 Greg Hackney of Gonzales, La., uttered those words immediately after he weighed in a 20-pound, 2-ounce limit to take the lead Thursday during the GEICO Bassmaster BASSfest presented by Choctaw Casino and Resort at Lake Texoma.

“Yesterday I fished a pattern that produced some solid fish, and today it was more of the same thing — they were just bigger,” Hackney said. “The bite has been pretty unpredictable, but I’ve been able to narrow it down to one bait. It’s risky business relying on one presentation, because it could pay off big and win me this tournament, or it could end up costing me.”

Hackney came into this event leading the Toyota Bassmaster Angler of the Year race, and he said it was his objective to strengthen that lead by staying consistent on the water.

“I’m a long ways from winning Angler of the Year, but I knew that a good finish here would put me one step closer,” said Hackney, the 2014 Bassmaster Angler of the Year. “I’m not concerning myself with anything other than tomorrow. If I can stay on the pattern and put together another solid limit, then I’ll start thinking about winning the derby. Right now, I’m just thankful for another great day.”

While Hackney increased on his previous day’s weight, Ashley dropped a few pounds with 14-9 for a two-day total of 34-10.

“I caught the right fish early in the day, but things really slowed down during the afternoon, and opportunities to upgrade were hard to come by,” Ashley said.

“Not much has changed since yesterday, but the pattern I’m fishing is largely dependent upon bass that are hanging out in the flooded bushes. With the receding water, the bass might be beginning to move out, but I’m confident my pattern will still produce tomorrow — I guess we’ll see.”

Also making a strong case for the 2016 Toyota Bassmaster Angler of the Year title is Gerald Swindle from Warrior, Ala. After today’s weigh-in, he is 30 points behind Hackney. Of course, that may change by the end of the tournament, but you can bet Swindle is focusing on a strong finish.

“I’ve made a asserted effort to slow down this year,” Swindle said after he brought 17-10 to the scale for a two-day total of 32-5.

“I drive slower, I fish slower aiming to be more thorough and catch every fish possible. I caught a lot more bass yesterday because I was moving faster and covering more water. But, my limit today was bigger and I fished slower. That just proves to me how important it is to make every cast count.”

Thursday’s Phoenix Boats Big Bass was caught by Bradley Roy of Lancaster, Ky., and weighed 7 pounds even. If nobody catches a bigger bass during BASSfest, Roy will receive a $1,500 bonus.

Hackney also earned the Livingston Lures Leader Award of $500 for being the second-day leader.