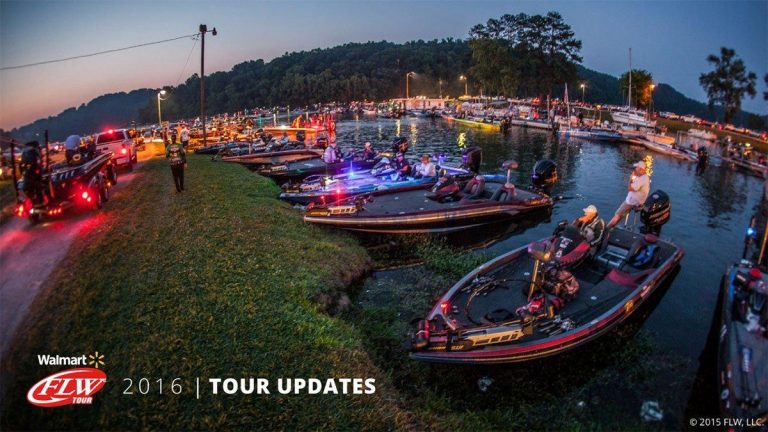 FLW announced Thursday its planned enhancements and key changes for the 2016 Walmart FLW Tour season. Among the major changes are the addition of two fall FLW Tour Invitational tournaments and changes to Rule No. 19 to now allow competitors to fish in their own wrapped boats on all four days of FLW Tour competition.

The two fall FLW Invitational tournaments will be held after the 2016 Forrest Wood Cup at locations yet to be announced. The tournaments will feature a three-day format and a 125-boat pro field (no co-anglers) with a $4,000 entry fee. The field will consist of the top 100 professionals and top five co-anglers from the 2016 FLW Tour Angler of the Year and Co-angler of the Year standings along with the top four pros from the Angler of the Year standings in each of the five 2015 Rayovac FLW Series divisions. Co-anglers accepting invitations to compete in the Invitational tournaments will compete as pros. The winner of each Invitational will receive a top prize of $100,000 cash along with automatic qualification into the 2017 Forrest Wood Cup.

Also new for 2016, pros will use their own boats on every day of competition. Sponsor exclusivity for boat wraps will no longer exist, and the list of FLW exclusive categories for logo display on jerseys during the final two days of competition has been reduced from nine to five.

“We are excited to announce some key changes for the 2016 season that allow anglers to better promote themselves and their personal sponsors,” said Kathy Fennel, FLW President of Operations. “Helping pros build their personal brands and sponsor portfolios is something that we’ve concentrated on in recent years. Allowing them to use their own boats on every day of competition and adding two events were the next logical steps. By adding two events we’ve also accommodated a long-standing request from some pros to fish without co-anglers while not sacrificing the great opportunities we still provide to this important segment of our fishing community.”

Instead of advancing to the 2016 Forrest Wood Cup, top co-anglers will now receive a Co-angler of the Year payout through 10th place, with first place receiving a Ranger Z518C with a 200-horsepower Evinrude or Mercury outboard and 10th place earning $4,000. The top five co-anglers will also have the opportunity to compete as pros in the new Invitationals to punch their ticket to the Forrest Wood Cup.

The top prize at the 2016 Forrest Wood Cup will be $300,000 with the rest of the payouts remaining the same as 2015. FLW Tour pro entry fees will increase $200 per event, for total entry fees of $27,000 for the six regular-season events. These changes allow FLW to continue offering professional bass fishing’s best overall payouts for the lowest overall investment while providing a much more open platform for anglers to promote themselves.

“We believe the changes for 2016 will help strike a better balance between the desires of most of our FLW Tour anglers along with our business needs as an organization,” said Bill Taylor, FLW Senior Director of Tournament Operations. “I believe that the overwhelming majority of our anglers will be very happy with these changes, and I am excited to get our season kicked off in just four months on Lake Okeechobee.”

Complete rules for the 2016 Walmart FLW Tour will be posted soon.