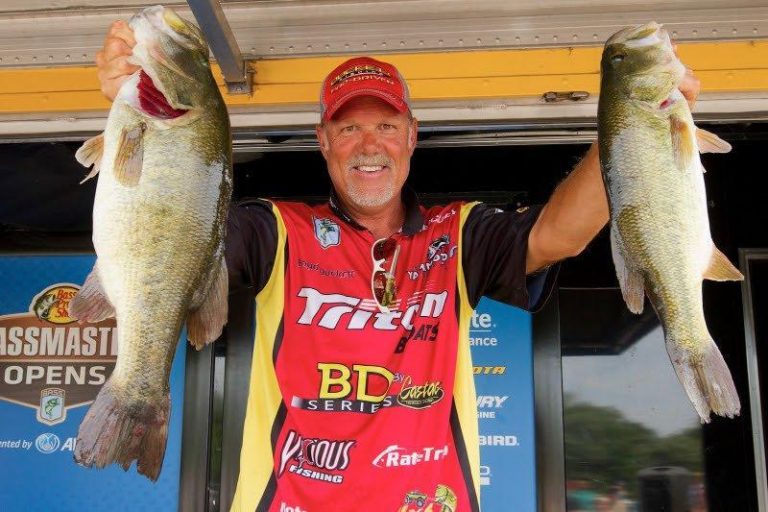 The Bass Pro Shops Bassmaster Northern Opens presented by Allstate are supposed to provide anglers with a respite from the summertime heat of the Deep South, but on Thursday, the first day of the season-opening tournament on the James River, the temperature hit a steamy and humid high of 97 degrees.

“I burned lots of fuel today,” said the 2007 Bassmaster Classic champion. “I hit a lot of one-fish spots. The tide is everything here; you have to hit your best places at the right time. There are lots of boats running the areas that I’m fishing. Every place I fished had 29 boats on it. But it’s the way that I’m fishing it that makes the difference.”

Mike Iaconelli, who sits in seventh place with 15-9 and has made two final-day cuts here before, said that he was surprised to see a 20-pound bag brought to the scales. There might have been two such bags had Pennsylvania pro Dave Lefebre capitalized on all of his chances. Instead he weighed in 18-6, putting him in third, less than 2 pounds behind Duckett.

Like Duckett, Lefebre said he’s “doing something a little bit different,” and had the bites to have a 23-pound limit.

In between those two pros sits Chris Dillow of Waynesboro, Va., with 18-13. Dillow is taking a break from his real estate business and “just going fishing.”

Despite being a relative local, Dillow said he’s not running the tides, but rather waiting out his fish throughout the changing water levels.

“I didn’t have a plan today,” he said. “Tomorrow my only plan is to keep Dillow’s Perfect Jig in my hand and not put it down.”

Another pair of Virginians, Ryan Powroznik and Frank Poirier, hold down fourth and fifth with 17-3 and 16-4, respectively. Powroznik, the cousin of Elite Series pro Jacob Powroznik, ran the tide until about 1 o’clock, but said that he could have done better had he not gotten behind on his rotation.

“There’s only a tight window of time when they’re feeding,” he explained. “I didn’t beat on them too bad today.”

While Iaconelli is nearly 5 pounds off the lead, he refused to concede anything after one day, He noted that Duckett similarly had a massive bag last year at the Elite Series tournament on the Delaware River, an event in which Iaconelli eventually claimed the trophy before an adoring hometown crowd.

“The key here is to be consistent,” Iaconelli said. “Anyone who can catch 13 to 15 pounds a day over three days will have a shot to win.”

In the co-angler division, Lou Britos of Disputanta, Va., the last man in the field of nearly 400 total anglers to weigh in, took a commanding lead with a three-fish limit that weighed 12-07. No other co-angler made it into double digits. Indeed, the next angler in line, Scott Kerslake, is still shy of 4 pounds of Britos. Included in his catch was a 7-2 largemouth that he caught on a spinnerbait around noon, fishing behind pro Joe Gensini of Illinois.

“I didn’t do anything special,” Britos said. “My partner had me around fish all day.”

The big bass on the pro side was caught by Roy Minnock, also of Illinois. His bass weighed 6-11. If either of those fish holds up as the Bass Pro Shops Big Bass of the tournament in their respective divisions, they will be worth $750 on the pro side and $250 on the amateur side.