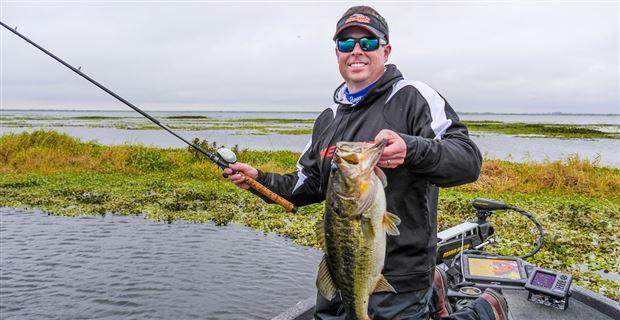 There is a good chance that bass or some other species of fish have “hooked” you about as much as you’ve hooked them. Chasing these fish is what gets us up early in the morning and what fills our dreams at night.

But as we all know, it is not always easy to consistently find and catch the fish. That’s why understanding bass movement is oftentimes more important than the color of the lure or the type of line you are throwing.

Where are the bass coming from? Where are they going? How will they react to the various lake and weather conditions that they might face? These questions are pieces of the puzzle we must decipher if we want to find and catch bass.

Each lake is different, and while Redington’s insights are more of a case study for Lake Fork and other lowland reservoirs like Kentucky Lake or Lake Guntersville, they can be applied to any body of water to help you catch more fish. 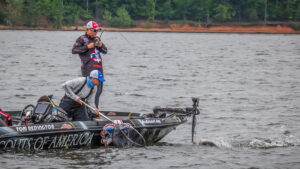 Perhaps the most important thing an angler can understand is the movement progression bass go through during different times of the year. Generally speaking, bass will move from their deep wintering areas to shallow water spawning flats during the early spring transitional phase(s).

They stop at several places along the way, but they head shallow to spawn and will then head back out deep during the post-spawn and into the summer. Redington notices a myriad of intricacies during these phases, but one important factor he stresses is longevity.

“During the spring, when fish are heading shallow to spawn, they will be moving pretty slowly,” Redington said. “A cold front will come through, and they’ll move back towards the main lake, or a warming trend will send them slowly along the creek channels. But they aren’t moving real fast.

“Once that post-spawn period hits, the fish will move in a hurry. The biggest bass in the lake tend to spawn first and then head straight out to the main lake points for the shad spawn. After that tapers off, they’ll head out deep.”

“The fish were mostly post-spawn and using my history at Lake Fork, I went up shallow and found a really good shad-spawn bite,” Redington explained. “Then that deal absolutely died on my third day of practice.

“At that point, I knew I had to head out to those first deep stopping places to look for the bigger fish, and they were there. Not a lot, but a few. I knew there would be more coming to me every day, and I knew it would be a quick transition.”

Though there weren’t a lot of fish using these areas, Redington gambled and chose to fish these deep transitional spots. Resulting in a three day total of 71 pounds, 13 ounces and a first-place trophy as well as $40,000 in cash and a new Ranger Boat. 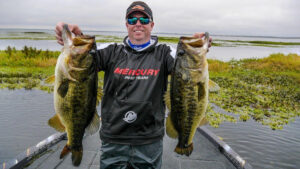 A group of fish, whether shallow or deep, is going to react differently when faced with different weather patterns. High skies and sun may make the fish you’ve located act completely opposite than cloudy, frontal conditions. Knowing how to read these conditions and change with the fish will result in better days on the water.

For Redington, different weather conditions mean conflicting things depending on the time of the year. During the pre-spawn, he wants to see cloudy, frontal conditions. This is when you can pick up your favorite spinnerbait, Strike King Red Eye Shad, or Z-man Chatterbait. The fish will be roaming around and aggressively feeding, resulting in more bites on these type of moving baits.

Bright sun, high sky scenarios can make those shallow springtime fish tougher to catch, but not impossible. The fish will get grouped up in smaller stretches and often times, extremely tight to cover. Instead of fishing the edge of the grass, you may have to punch through it.  Rather than casting around a stump, you’ll really have to rub the bark off of it to get a bite.

On the contrary, in the summer months, when the bass are out in their deeper haunts, Redington wants exactly the opposite conditions from the pre-spawn period.

“In the summer, I like a few clouds and a little chop, but the bright skies and sunny days seem to drop the shad down to the bottom and get the bass real grouped up,” Redington said. “A lot of times making them easier to catch. Windy, rainy, and frontal conditions will make the shad more active and therefore make the bass more active. They’ll roam around in a larger area to feed, making them harder to pinpoint.”

We’re only brushing the surface here with bass behavior in relation to different weather conditions, but the main point is to understand that different conditions can result in contrasting behaviors for bass. Don’t expect one day to be the same as the last, especially if the weather is doing something dissimilar.

Changing water levels on a fishery almost always move bass around in some way or another. Having an idea of where these fish will be headed or where they might be leaving can turn a frustrating day of fishing into a memorable one.

Vice versa – if it is post spawn and the water starts dropping, Redington knows the fish will almost immediately head away from the bank. With the spawn being past, the bass don’t have anything holding them shallow and won’t stick around. If you’ve been catching them on a post-spawn shallow bite and you notice dropping water levels, you’d be wise to head towards deeper water; as it’s likely the bass are doing the same. 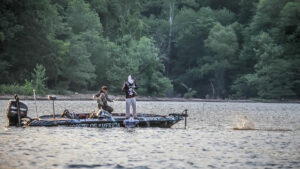 Whether we like it or not, many times in bass fishing we are faced with fish that are found by more people than just ourselves, especially on the major public fisheries in your area.

Redington often has to deal with pressured fish and has learned to deal with it much like changing weather conditions. He keeps it simple when targeting bass that have been heavily fished.

“Be wary of pressured shallow fish. If you have a shallow stretch of bank you’ve been catching them on, and you know other anglers have been catching them too, you might be throwing to empty water,” Redington said. “You can sometimes still get them to bite a finesse bait like a wacky-rigged Lake Fork Hyper Stick, but often times, those fish will simply pack their bags and leave.”

If he is fishing for a deep school of bass, Redington won’t be so quick to abandon them.

“For deep fish experiencing extreme pressure, I always try to use my Lowrance units and look in nearby, less obvious places,” Redington said. “They might go more shallow or deeper on the ledge, point or hump, but they will usually still be in the same area.”

Redington will also use his HydroWave to fire up these deep schools of pressured bass. He’ll experiment with the settings on this tool until he notices the shad getting active. When the bait gets active, it usually doesn’t matter how many times those fish have been caught, the bass will get active too.

Bass fishing can be a game of a thousand variables, and no two days are ever exactly the same. Make no mistake, the right equipment is important, but knowing how bass will respond to changing conditions or time of the year can help swing the odds in your favor.

“It’s awesome when you can get ahead of the fish,” Redington said. “Those are the guys who usually win tournaments or have great days. You know, the first to find shallow spawners, or the first folks to find them deep. Knowing where they have been and where they are headed usually results in you having the fish all to yourself.”

Use Redington’s tips, along with what behavioral trends you’ve noticed on the bass in your local fishery and keep grooving with the fish. Don’t get locked into the same old ways when faced with changing conditions and don’t be afraid to gamble or move with the bass. Chances are you’ll spend less time scratching your head and more time with a bass on your line.