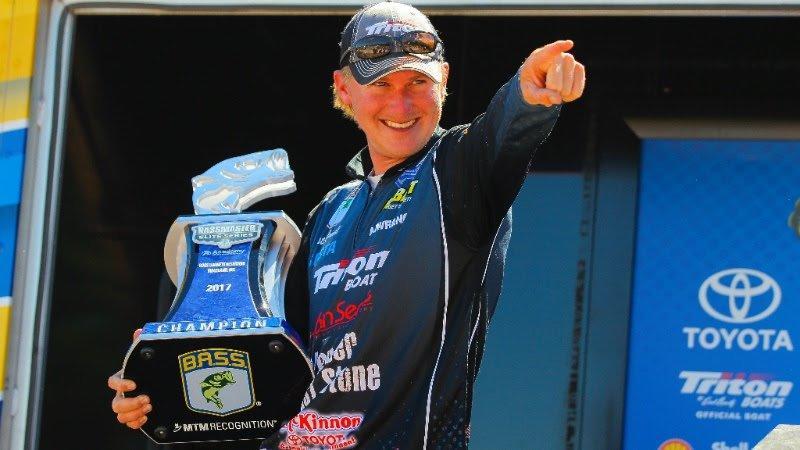 Severe storms may have caused the postponement of the final round of fishing Sunday, but nothing could stop Bassmaster Elite Series rookie Dustin Connell of Clanton, Ala., from claiming victory in the Academy Sports + Outdoors Bassmaster Elite at Ross Barnett.

Connell caught a five-bass limit weighing 12 pounds, 15 ounces today, pushing his four-day total to 64-13 and holding off a late-charging veteran Kevin VanDam, who ended with 62-10.

Hoisting the coveted first-place trophy overhead â€” and pocketing the $100,000 that goes with it â€” has been Connell’s dream since childhood.

â€œThis dream was becoming a reality back in my college days, when I fished the Carhartt Bassmaster College Series Bracket Challenge against Matt and Jordan Lee of Cullman, Ala.,â€ Connell said. â€œThey fished for Auburn University, and I fished on the University of Alabama team. Matt went to the Classic that year, and now the three of us compete in the Elite Series.

Jordan Lee won the 2017 GEICO Bassmaster Classic presented by DICK’S Sporting Goods in March, and now with Connell’s Elite Series victory, the anglers who rose through the college ranks are proving their worth.

â€œI’m so thankful for the opportunity to get my start in big tournaments through the college fishing program,â€ he said. â€œIt’s testament to Bassmaster’s seeding the future of professional bass fishing, and I’d say this to every college angler with a dream, â€˜You can do this, too.’â€

Connell’s fish-catching pattern this week was something he discovered in pre-tournament scouting, and it was so promising that, even back then, he felt confident he would win the event.

â€œI knew I needed to find something different and a long way from the crowds that would build on a smaller fishery like this,â€ the 26-year-old angler said. â€œWhen I arrived for official practice, I caught a 4- and a 5-pounder right away â€” and then I put my rods down.â€

To save his bass for the competition days, Connell spent the rest of his practice viewing similar spots with his Lowrance sonar and GPS units.

â€œI caught probably 25 swim-jig fish on Thursday,â€ he said. His best five that day weighed 19-12. â€œBut Friday was a turning point of this tournament. I didn’t have a fish before 10:30 because the Pearl River water rose and got muddier, slowing the pattern. I decided to go back and flip all of the same stuff, and I caught another 16 pounds in a short while. At that point, I knew I could win.â€

Connell became concerned, however, when a massive supercell of thunderstorms and heavy rain forced the postponement of Sunday’s championship round. Competition resumed on Monday, and Connell was relieved to see the water conditions hadn’t gotten too much worse.

â€œToday was definitely harder because of that weather system,â€ he said. â€œI really had to work for my fish, but thankfully I was able to catch two key fish this morning on a frog in a small pocket â€” locations that were critical for me throughout the week.â€

â€œI can’t thank my family enough,â€ an elated Connell said. â€œThey have supported this dream from the beginning, and to win one this early in my career gives me a lot of confidence that I made the right decision chasing after it.

â€œI love to fish. I fish every chance I get, and what I’m able to learn from fishing against the best in the world at these events is something I’m very grateful for.â€

Brandon Lester of Fayetteville, Tenn., won the Phoenix Boats Big Bass Award of $1,500 for the 7-2 largemouth bass he caught during Thursday’s opening round.

Jason Christie of Park Hill, Okla., was awarded $1,000 for leading the Toyota Bassmaster Angler of the Year points race at the end of the event.

Kevin VanDam of Kalamazoo, Mich., earned the Power-Pole Captain’s Cash Award of $1,000 for being the highest-placing angler who is registered and eligible and uses a client-approved product on his boat.

Connell also won the Livingston Lures Day 2 Leader Award of $500 for leading the tournament on Friday’s second day of competition.