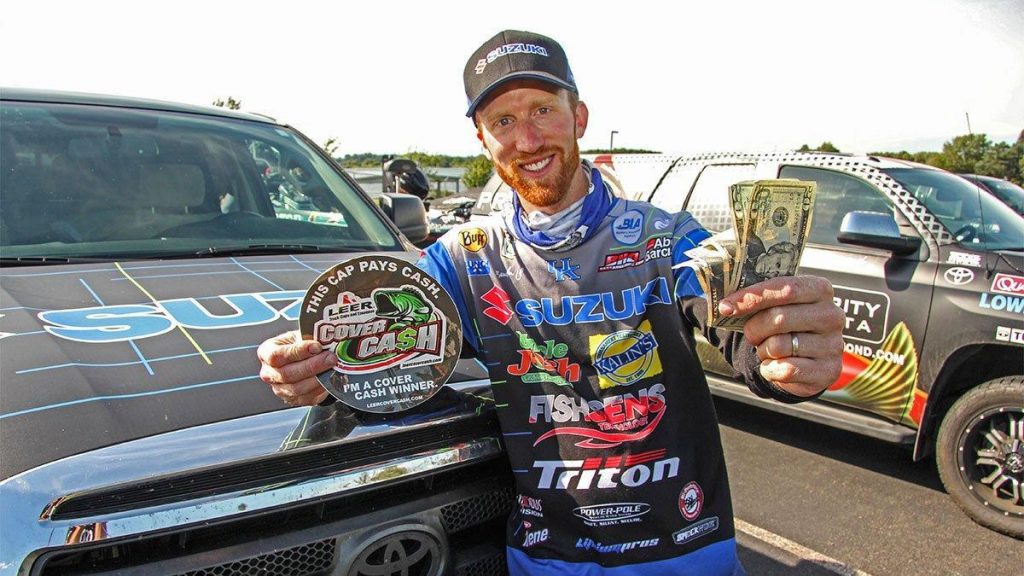 Wedding bells bring wedding bills, so 2012 Bassmaster Elite Series Rookie of the Year, Brandon Card’s winning both a LEER “Cover Cash” bonus for $500, and the second place Toyota Bonus Bucks contingency check for $2,000 as a result of his 4th place finish at the St. Lawrence River, should bring a smile to brand new bride Kelly’s face.

Card has a LEER truck cap on his 2012 Tundra that sported 92,531 miles on its odometer as he pulled away from his high finish in Waddington, NY.

“My LEER is awesome. It has never leaked and it pays me Cover Cash too,” said Card, who majored in Landscape Architecture at the University of Kentucky.

Within minutes of the weigh-in concluding, the 29-year-old was very aware that he had won a Toyota Bonus Bucks check too.

“When I first started fishing the Elites, I had an old 4Runner that was an absolute workhorse, but it was too old to be eligible for Bonus Bucks. So I bought a newer model Tundra and the Bonus Bucks pretty much paid all my truck payments that first year.”

Like Brandon, you don’t have to win a tournament to win the “Cover Cash” or “Bonus Bucks”. You just have to be a registered participant in any of the dozens of tournaments sanctioned by both bonus programs and be the highest-placing participant. To get signed-up, please visit http://leercovercash.com/ or http://www.toyotatrucksbonusbucks.com/ or phone Kristie at (918) 742-6424 and she can also help you get signed-up for either program.