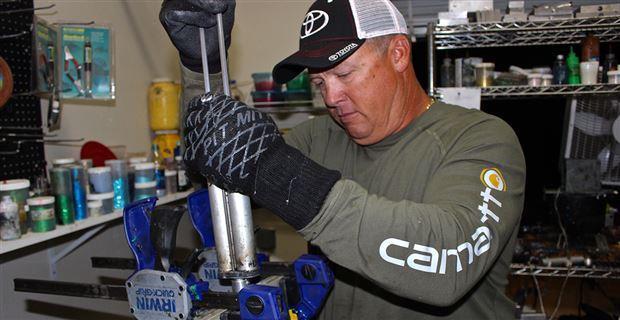 Professional angler Terry “Big Show” Scroggins is well known for his tinkering tendencies on bass fishing lures. What many people may not know, however, is that Scroggins pours many of the soft plastics he uses throughout the year on the Elite Series in his garage in San Mateo, Florida.

Scroggins has accumulated dozens of molds over the years, several of which are old, out of production soft plastics that have a place in the folklore of bass fishing. One such soft plastic is the Ditto Fire Claw.

The Fire Claw was created by Bobby Ditto of Ditto Manufacturing and was originally produced in the early 1980s. Ditto Manufacturing offered both a 3-inch and a 4-inch version of this craw imitating bait and they quickly became popular in the Southeast, specifically in the vegetation-rich fisheries of Florida.

“The Fire Claw has probably won more money in the state of Florida than any other flipping bait,” Scroggins said. “I know I personally cashed more than a few checks with it, but when ‘punching’ with a heavy weight became popular the Fire Claw really shined for all anglers.”

As Ditto’s lures grew in popularity, Ditto Manufacturing was purchased by Peter Allen in the early 1990s. Allen went on to open Allen Lures and continued to sell some great soft plastics until around 2003. Since then, the Fire Claw has been out of official production.

Coincidentally, Allen Lures was shutting down around the same time Scroggins used the Fire Claw to win his first ever Tour level event on Lake Okeechobee. Scroggins employed a technique he has since become known for, punching thick vegetation with a 1 1/2-ounce weight. Scroggins still gives that Okeechobee victory credit for launching his professional fishing career.

“About three or four years ago I got the opportunity to purchase some original Fire Claw molds at an auction,” Scroggins said. “I was able to get a pile of the original Ditto Manufacturing and Allen Lures molds for a reasonable price. I had no intentions of buying them at the time, but when I saw what lures the molds made, I filled the bed of my Tundra full! I did some research on pouring soft plastics and now I am able to make some of my all-time favorite baits in my own garage.”

Why the Fire Claw is special 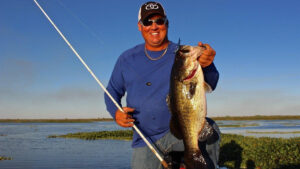 The Fire Claw is great for flipping grass mats and other heavy cover because it is so compact. When you look at the 3-inch model Scroggins pours, it looks so small you’d think a bass would ignore it. But as Scroggins has demonstrated, when it’s punched through a mat with a 1 1/2-ounce weight, it gets the fishes attention! According to Scroggins, the Fire Claw also has the right density to be a stellar flipping bait.

“The density of the Fire Claw is key,” Scroggins said. “The bait itself is very soft, but it is tough enough that it doesn’t tear up easily after repeated pitches and flips through heavy cover. Meaning I go through fewer of them throughout the day and I don’t have to fool with fixing the hook and profile every other cast.”

Of course, another reason Scroggins believes the Fire Claw is so effective, is because they are no longer in production, with the exception of the few hundred lures Scroggins pours in his garage each year.

How Scroggins fishes the Fire Claw

For Scroggins, the Fire Claw is predominately used for punching heavy cover, specifically matted vegetation. He Texas rigs the Fire Claw using a 4/0 or 5/0 Heavy Cover flipping hook, under a 1-ounce to 2-ounce Tungsten sinker.

Since he focuses his efforts on the thickest of cover, a stout 7-plus foot flipping stick, 65-pound Hi-Seas braided line, and a fast 7:1:1 Lew’s reel is the ideal rod and reel combination Scroggins prefers. 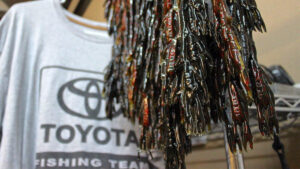