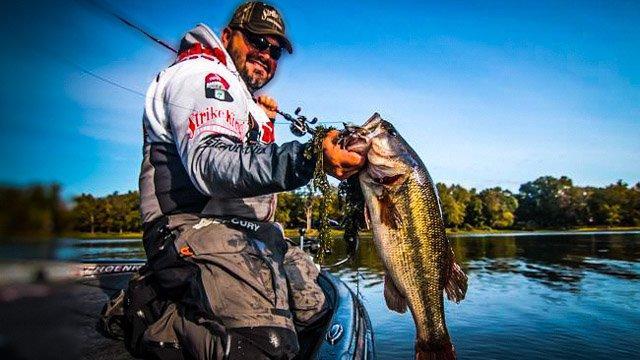 But most people don’t realize he’s constantly evolving as a bass fisherman and specifically a jig fisherman. Part of that evolution in 2014 came with some discoveries about swim jigs that began in the offseason. His advice will help anglers realize, like he did, you can fish a swim jig all year long.

Hackney offers 4 things that prevail when fishing a swim jig all year round: 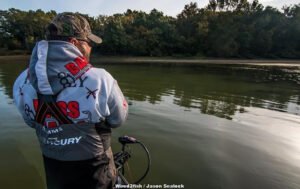 More than one way to skin a jig

In February of 2014, Hackney fished a lot around his house to prepare for the upcoming season and work on some techniques and tackle before he hit the road on a grueling two-tour schedule. Where he lives, the winter brought extremely cold temperatures and pretty tough fishing with it.

The fish pulled off in these shallow fisheries and got down in the canals in like 6-8 feet.

“I was taking that 1/4-ounce swim jig and just barely swimming it at a crawl on the bottom around those scattered milfoil clumps,” Hackney said. “They would eat it down to their throats every time.

“Then we go to Rayburn, and you can’t reel a swim jig fast enough to take it away from them there. So seeing that variety really opened my eyes to the fact that you can fish a swim jig all year. I had caught a lot of fish swimming a jig but I realized I was just scratching the surface. It was one of those ‘ah-ha’ moments.” 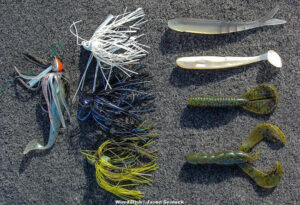 It takes all types

One of the biggest things Hackney realized this season was you need more than one size swim jig. He now carries a boat load of 1/4-ounce, 3/8-ounce and 1/2-ounce namesake Strike King Hack Attack Swim Jigs. He has found that with those three sizes in conjunction with several different trailers he can crawl it high or low in the water, burn it, fish it over and threw various forms of cover and literally cover the water column from top to bottom in a manner that will appeal to bass from Winter to Fall.

He mixes up his trailers quite a bit but he does have a system for them.

“When I know I’m around bluegill eaters, I like the Rage Craw,” he said. “There is something about that really violent kicking legs that gets those aggressive bass triggered when they are really running bluegills down.

“When it’s more of a shad deal, I usually stick with the swimbait tails like the Swimming Caffiene Shad or something like that.”

He’ll also use a Menace for subtle action and a compact profile. He usually sticks with either a bluegill pattern or baitfish pattern. 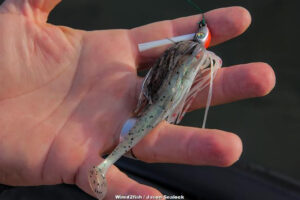 Change can be (very) good

He’s found, however, that when the fish are in tough conditions, sometimes a subtle trailer change can be the difference in not getting bit and really catching them good. Sometimes when the fish are biting his legs off his Rage Craw, he’ll drop down to the SKL Menace. Next thing he knows, the he hooks fish in the back of their throat.

Sometimes he’s found that putting a really big trailer on really light jig enables him to roll it slower over cover and still keep the bait up and draw some vicious strikes.

“It’s amazing to me how in tough conditions making a simple action change to the swim jig gets the fish going,” Hackney said. “I’ve changed trailers and gone from no bass to catching several big ones the rest of the day. It’s like they wanted action, but too much action was almost a hindrance. Or the bait was going too fast and a big trailer slowed it down and they liked that better.”

Sometimes, his retrieve changes. When he first started swimming a jig, he was power swimming it with the rod high and imparting the quick pulses with the rod tip. But he’s had a lot of days where changing to a slow-rolling retrieve produced better. Sometimes he’s caught them really good waking the swim jig just under the surface and bulging the water to draw savage attacks. But what he’s found more often than not is the bass react to one retrieve better than another so he experiments constantly while fishing.

Don’t mess up the easy bites

Hackney uses braided line as much as possible. There might be times in really clear cold water where he’s just crawling the bait along, that he might go down to fluorocarbon line. But because he’s mostly using braid, and even with limited stretch of fluoro, he doesn’t have to get carried away on sweeping hooksets.

He simply keeps reeling the jig until the fish loads the rod for him.

He gave a great explanation about how anglers get too carried away on hooksets at a recent Bass University course.

“The point of the hook to the barb is about a 1/4 inch — that far,” he said. “We only have to make the hook penetrate that far. What I learned years ago when I would reel down and crack one, I’d set the hook with the rod 6-8 feet and snatch that 2-pounder out of there with a big hole in his mouth and then I’d have slack because I had to now go back and catch up with that fish.”

A pretty astute observation about how we can be our own worst enemy on a hookset. Now Hackney wants to actually feel the rod start to bend before he gives a sweeping reel set into the fish. Now the fish stays loaded on the rod the whole time and he doesn’t force the fish to get ahead of him on his reel and handling.

He also uses a long rod with a little softer tip so that it loads a little before he sets the hook. He still wants the heavy backbone. But he doesn’t want the rod so stiff that he’s actually snatching the jig away from the bass.

“A bass doesn’t feel you as much as you think he does,” Hackney said. “If he goes out and eats anything in nature, it’s going to try to pull away from him, to try to escape his mouth. So you can reel into them a little before you set the hook to be sure you have the slack out. We cause more problems by snapping slack on our hookset.” 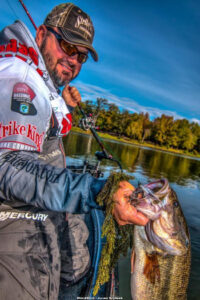