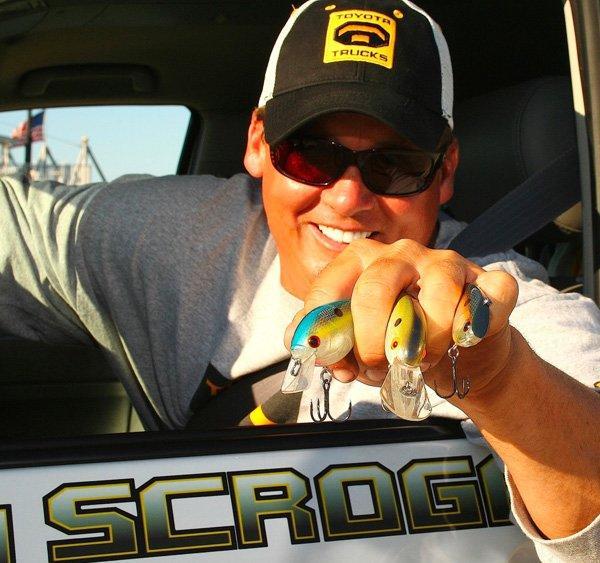 Always friendly Florida pro Terry â€œBig Showâ€ Scroggins says there are three lures he won’t leave home without in autumn â€“ all of them crankbaits.

Actually, Scroggins was given the choice to pick any three lures in the world for autumn. Nothing said they had to be crankbaits. Still, based on the famed fall shad migration — all three of his picks had treble hooks hanging from their bellies.

â€œAs most of us know, shad are pushing toward the back of the creeks this time of year,” Scroggins said. “I chose three crankbaits because it’s all about lures that resemble the dominant food source. I chose a  lipless Xr50 to fan cast across the flats in the back of the creeks, an  XCalibur XCS200 squarebill crankbait ideal for working through wood or around shallow rocks, and lastly, a deeper diving Bomber BD6F.

â€œThat BD6F becomes the emergency back-up so to speak. Because much like the spawn, not all bass behave exactly the same on any given day. In other words, not all the shad and bass migrate to the back of the creek at the same time. If I’m struggling to catch them on top of the shallow flat, or around shallow cover, I’ll back off to the deeper creek channel and hunt â€˜em up with the BD6F â€“ it runs about 10 feet deep.”

What if they don’t migrate much on your home waters?

â€œTidal water, along with a lot of the natural lakes like we have here in Florida don’t have much of a shad migration,â€ said Scroggins, winner of more than a million bucks as a pro. “But I can still use the Xr50, or the shallow running square bill, to tick the tops of the aquatic vegetation. It doesn’t have to involve the back of a creek.

â€œWhether you’re following shad to the back of a creek, or fan casting a grass flat this time of year, you gotta look for the pattern within the pattern. Pay attention to the little unique differences like an isolated log, or a ditch that’s 12-inches deeper than the rest of the shallow flat. It doesn’t have to be a profound difference.

â€œWhen you can find the shad, and find the unique cover they’re relating to, then you’re gonna catch the bass. It’s all about the food,â€ said Scroggins. â€œTake me for example. If all I had to eat was hot dogs, I could survive. But if I heard they were serving a bunch of free lobster across town, that’s where I’d be migrating to.â€