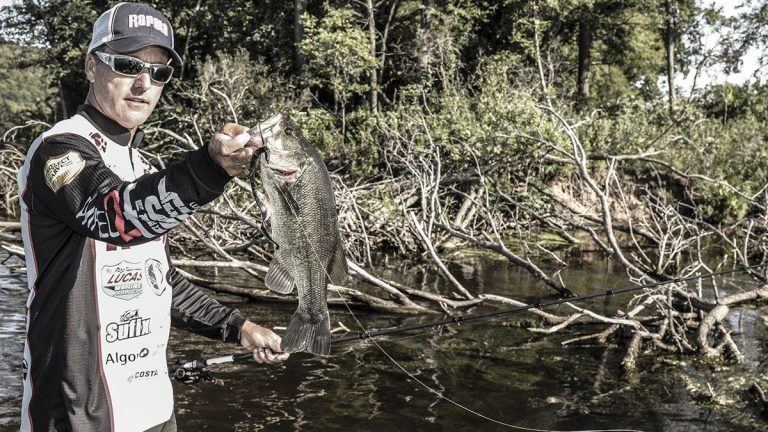 “The young-of-the-year threadfin shad are starting to reach that 1- to 2-inch size and then you also have those big gizzard shad,” said FLW Tour pro Terry Bolton. “With the drawdown, you get those laydowns, stumps and chunk rock banks (partially) exposed. The shad get up there on that cover — anywhere there’s algae — and feed along the bank.”

Casey Martin’s partial to isolated cover in areas with quick access to deep water — bluffs, creek mouths and the like. His dream scenario: a stump row leading to deeper water or laydowns extending into the creek channel. Both allow fish to move up and down as the drawdown happens. He loves to crank a Rat-L-Trap Echo Square Bill crankbait in these scenarios.

Bolton also points to riprap as a perpetual point of structure, shade and wind break that benefits fish and fishermen alike. Fall often sees huge schools of those gizzards and threadfins grazing their way along the rocks, often in mere inches of water. Find one of these meat balls and you can bet the farm that largemouth lurk in the nearby depths and watch for their chance to attack.

“I like using square bills, spinnerbaits and Chatterbaits to cover water and locate the fish,” he said. “If the bite gets tough, I’ll switch to flipping, especially under high sunny conditions without much wind or current.”

Bolton’s lineup includes the Rapala Skitter-V, a 1/2-ounce double willow leaf spinnerbait and a shallow- to medium-running crankbait like Rapala’s DT-4 or DT-6. The same selection fits the riprap scenario, too.

“I like to throw a lot of moving type baits because in the fall, what you’re looking for those pods of bass moving in and out of the shallows,” Bolton said. “A lot of times, I think that’s what you do — you’re running into those little wolf packs of bass that are moving along the bank looking for an easy meal.” 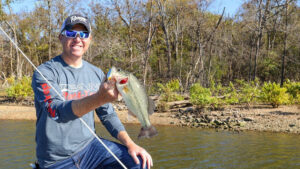 While the obvious shoreline cover offers plenty of opportunity, Bolton points to offshore flats like those of the Tennessee River where isolated shell bars and rock clusters create an under-utilized drawdown goldmine.

“I fished a tournament recently and some of the fish that I caught off the shoreline spit up great big skeletal remains of gizzard shad,” Bolton said. “So they’re feeding on them in 6-8 feet of water, as well as right against the bank.”

Sure, it’s easier to locate shoreline cover, but Bolton said a little screen snooping — and alertness — will lead you to the buffet.

“You can find those little piles of rock out off those ledge with your Humminbird side imaging,” he said. “You can also use a Carolina rig or a football jig to feel for those things, but a lot of times you’ll actually see those big gizzards come up and flip or roll.

“For my third choice, I really like a DT 10 or a DT 14, especially if the water has a little more color to it.” 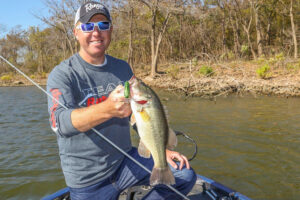 Unlike a bank littered with submerged rocks and laydowns, fall’s target scarcity increases the time commitment to each piece of cover. That means coming at the spot from different angles; possibly letting it rest and then returning with a different look.

Whatever bait you choose, Martin stresses the prudence of a disciplined approach.

“You have to be stealthy with the trolling motor on low and make accurate casts so you don’t spook the fish,” he said. “Usually during the drawdown, multiple fish will use the same piece of cover because a lot of the other cover will be too shallow or out of the water.” 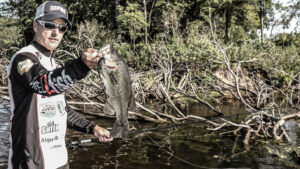