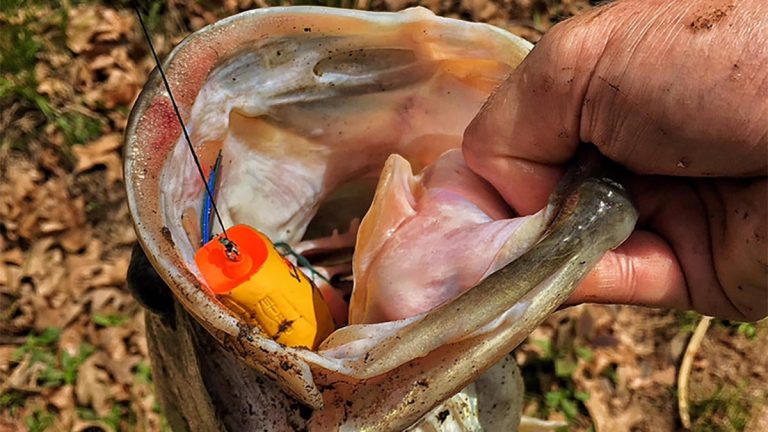 If you’re not in a deer stand or a duck blind by now, you have a special opportunity in front of you. The fall topwater bite is outstanding and peaking throughout much of the country, which means you can fully expect to get some big-time blowups for the next few weeks.

Everyone talks about shad in the fall, so you’ll hear a lot about walking topwaters, poppers and buzzbaits. These choices certainly work, but I strongly suggest keeping frogs and toads in your starting lineup. While you might not catch the big numbers of fall schoolers chasing bait, you’ll have a legitimate chance of catching serious quality.

Follow these guidelines for the next few weeks; I think you’ll be pleasantly surprised by what you catch.

This is one of those weird bass fishing things that throws a lot of folks off. Frogs and toads seem like synonymous terms, but they’re far from it in fishing. While they’re both designed to be used as surface lures, the similarities stop there for the most part.

Hollow-bellied frogs-commonly shortened to “frogs”-float while at rest. So if you make a cast and don’t do anything else, a frog is going to sit on top of the water. They come with the hooks already placed in the bait and they’re meant to walk and pop across the water’s surface.

Toads, on the other hand, are soft-plastic baits with elongated legs. They do not come with hooks-the angler is responsible for rigging them up. The large majority of toads sink while at rest. Unless you constantly reel your toad across the surface, it will slowly sink to the bottom. For this reason, these baits are designed to be constantly retrieved, allowing the legs to kick and cause surface commotion.

Why should I throw a frog? 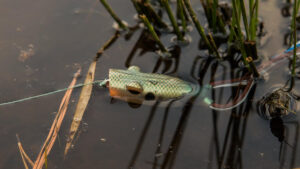 Frogs have a very specific purpose and when used in the right situations, they’re one of the best fall baits you’ll use. I’ll tell you how I like to use ’em the most.

I prefer to use frogs around thicker grass and heavy laydowns. Because these baits float at rest, they allow the angler to fish very slowly and methodically through areas with gnarly cover. Whether you’re walking or popping the frog, you’ll be able to make the bait move laterally, but it will stay in the strike zone for a longer period of time. Essentially, you’re imparting action into the bait without bringing it towards you too quickly.

This is my preferred way to fish nasty stuff. If the grass hasn’t started its fall breakup in your area yet, you’ll have a lot of success using frogs in whatever grass mats remain on your lake. While your frog might land on a solid sheet of grass, don’t let that discourage you. Slowly pop that frog towards the nearest opening-or “blowhole”-in the vegetation. Bass use these holes as ambush points. They know your frog is on top of that grass mat. They can feel the pressure waves with their lateral lines and they’ll track that frog under the grass mat and be ready to intercept it as it enters the blowhole.

Again, this is where the major advantage of hollow-bellied frogs comes into play. Because it floats, you can keep it in these high-percentage strike zones for much longer than a soft-plastic toad. This gives you the option of slowly walking the frog through the blowhole to entice those wary bass to bite. 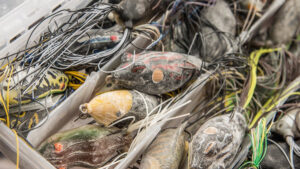 As temperatures drop in the fall-especially here in the South-the larger bass can get a little trickier to locate and fool. It can be mighty tough finding those quality bites throughout a day of fishing. Therefore, I also like to use frogs around big laydowns towards the backs of creeks.

Personally, I believe these bigger bass become lethargic a bit earlier in the fall than the smaller schooling fish. These frogs and their ability to float, however, have a way of nagging those big bass until they bite. You can keep ’em in those laydowns and force aggression strikes, even if the bass aren’t actively feeding.

But it ticked us off after a while, didn’t it? Eventually, after we couldn’t take the irritation anymore, we’d swat their hand away from our face. This is exactly what inactive bass will do to a well-placed frog. Think about that the next time you’re out there.

Why should I throw a toad? 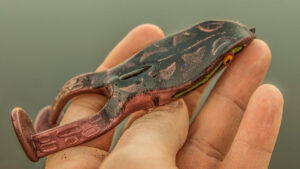 This time of year, I consider a toad my “search and destroy” choice when I’m actively looking for fish. There’s a lot going on right now and the bass are constantly moving to and from shallow water looking for easy meals. If you don’t stay on top of them, you’re going to feel like you’re in the Dead Sea; and they can leave in a matter of minutes.

If you’re unfamiliar or inexperienced with toads, consider them a quieter and more all-terrain buzzbait option. It’s imperative that you keep them moving on the surface. For this reason, they’re incredibly tough to beat when you’re not quite sure where the fish are yet.

Although they’re not very effective around matted grass, they tend to shine brightest around sparse grass once it starts to break up due to the cooler temperatures. I like to look for any irregularities in the outside grass lines. Any type of small pocket, point or hole will likely result in some action. Keep in mind, however, that these irregularities only need to be about the size of your ball cap. They don’t have to be some big, dramatic feature. 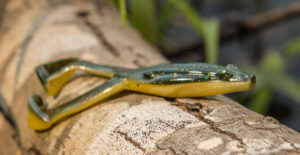 Throughout the fall, both the bass and shad migrate to and from shallow flats. Bass love to follow an edge-or some sort of defined line-during this migration. In human terms, think of it like this: If you were in a smoke-filled house and needed to run down a hallway to escape, you’d feel most secure touching a wall while you found your way out. I think bass view these edges in a similar fashion. The fall brings lots of showers and dirtier water, so while their visibility may be lower, they can follow these grass lines and feel more secure.

To take advantage of this behavior, I suggest making long casts with your toad parallel to any grass lines you’re able to find. When the toad nears an irregularity, slow your retrieve just a bit. If you don’t get a bite, don’t be afraid to make five or six casts to the same area. The big ones don’t get big by being dumb.

These toads can also be especially effective underneath boat docks in the fall. Bass can lurk in the shadows and behind the posts and easily attack unsuspecting prey as it passes. It takes a bit to learn how to skip a toad underneath these docks, but don’t get frustrated or give up. It’s worth a few backlashes to learn because in my experience, very few people utilize this pattern. More times than not, if you can find this bite, you’ll literally have it all to yourself.

If you’re looking for some autumn excitement, don’t wait too long to rig up a few frogs and toads. Both baits have their time and place; if you can learn when and where to use ’em, you’re going to have some roughed-up thumbs in a hurry.