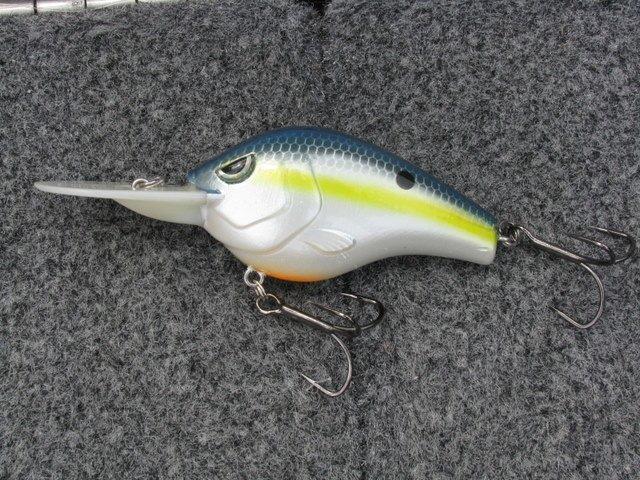 So we’re continuing our feature series on tips to help you catch more bass while fishing in the fall. We’ve talked about bass fishing with spinnerbaits and vibrating skirted jigs. Then we took you through some great tips for walking topwaters in the fall. Then we followed it up with some great advice about being smart with schooling bass in the fall.

One approach that is very effective is working backwards out and speed fishing some specific crankbaits on the last breaks in a creek arm. Sounds like a mouthful when you read it or speak it. But burning crankbaits has been effective for fall bass for since anglers first started fishing for bass with them.

“The fall is all about bait,” said Lane. “Mostly on the lakes in the south, the primary forage is shad. Now not all shad will do this, but a lot of them will migrate all the way to the backs of the creek arms with well defined creeks for the freshwater influxes. As the water cools more, there will be schools of bass that setup on the last drops heading to the back of the creeks. Then as they come further back out they will stage on channel swing banks.”

Obviously the bass move a lot in the fall. This isn’t the time of the year to sit on one spot all day. You’re looking in key areas, and often going to the backs of the creeks and idling out looking for those last drops can be a great place to start. By going to those big flats in the backs of the bays and then looking for the first key drop, you can often find the better fish staying away from the schools of bass chasing the little schoolers around the flats.

Lane seeks bays and creek arms that have well-defined creeks in them because they will have the most defined breaks in the backs of their bays. But he also wants there to be shallow flats. The combination of these two things will make one creek arm more attractive to another for this bass fishing stick. With the breaks and flats he can find the fish regardless of what mood or conditions present themselves by just moving from one area to another once he finds schools as conditions change, especially in tournament situations.

What Lane has found is the better fish are on the secondary locations, in those mid-range 8 to 12-foot zones. While schools of 2-pounders might be raiding shad and other forage up on the flats and points, he often finds better groups of bass staging on those last breaks. It may only be a few feet difference on the last channel edge in the back of a bay. It often is the last channel swing before the end of the bay. A good map, map chip and GPS can make the search for these swings a lot easier.

Once he finds the right area he has a handful of baits he’ll attack these schools with from his bass fishing arsenal. But his newest weapon might be his best.

“I actually designed a bait for fishing what I call those secondary locations,” Lane said. “Fish often hang in that 8 to 12-foot range because they are chased off the bank by angling pressure and they aren’t all the way out on the main breaks from summer anymore. So they are in between. The new Spro Big Daddy Strike was made just for fishing these types of situations.”

The Spro Big Daddy Strike will run 8-12 feet deep. A few unique characteristics separate this bait from some of its competitors. It was designed to have a wide wobble, which you want for the fall fishing season. But sometimes fishing a wide-wobbling, hard-pulling crankbait can wear out the best bass fishing anglers.

So Lane and the Spro designers went through several iterations of the bait to get one that had a great smooth roll, that you could burn all day and not wear yourself out. Lane uses the extra fast retrieves to trigger fish and elicit a competitive response from the bass.

He sticks with the shad patterns like Nasty Shad and Nasty Herring on the bright and calmer days and goes with brighter and white colors on darker days. When the bass quit reacting to his speed offering, he’ll drop it down in 4-wheel drive and put a reverse move on the bass. When a school quits biting and before going to his backup baits, he’ll completely change colors to a bright chartreuse colored bait, and he’ll just crawl the crankbait through the area.

“I have some amazing catches when I throw the change-up on them like that,” Lane said. “I’ll have the fish biting like crazy on a real natural pattern burning through the school. Then they seem to shut off and I start crawling a bright colored crank through there and they fire off again.”

The last thing he’ll do before he leaves one of those schools he finds on those breaks and swings is cast a few backup baits on them. His two backup baits of choice are a Buckeye Lures Football Jig with a Big Bite Baits Yo Daddy trailer and a Carolina-rigged Big Bite Baits Kriet Tail worm.

“I’ve really cleaned up in the fall with these baits,” Lane said. “I hit them fast and hard with the crankbaits and then mix it up at the end with the slower bottom bouncers. The temperatures aren’t the dictating factors as much as the shorter days and the bait movements. If I find a school of fish, I’m going to hit them with all three baits until I feel like I’ve exhausted the school and then I’ll move off and look for another and let those fish rest. But it can be a lot of fun when they are eating that crankbait zipping by really fast.”