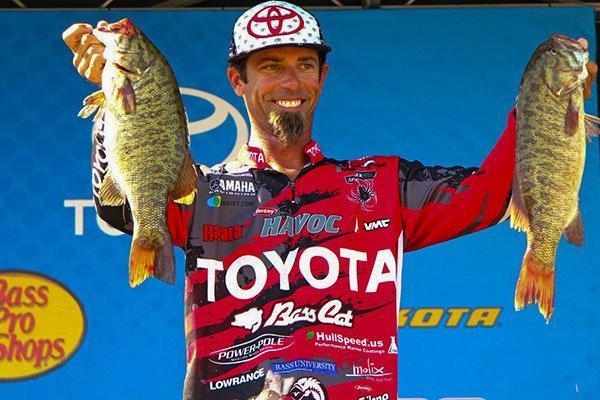 Mike Iaconelli didn’t get the victory or Top 12 finish he wanted at the Bassmaster Elite Series tournament on Lake St. Clair last August, but thanks to bald spots, he caught 47 pounds of Smallmouth and hauled home $10,000.

No, Ike’s not referring to a lack of hair on his 41-year-old head, but instead, places on the bottom of the lake in 10-15′ of water where the vegetation stops growing, and in turn leaves a very clean bottom.

“When you get to a lake like St. Clair, it’s so flat for miles across the bottom, that you have to pay real close attention to any little change on your sonar screen,” said the 2006 Toyota Bassmaster Angler of the Year.

“Sometimes that tiny change is represented by just one foot of depth, and sometimes it’s represented where the aquatic vegetation growing on the bottom stops all the sudden to form and edge with a bald spot of sand and gravel,” explains Ike.

“The vegetation looks like a guy’s short spikey hair growing off the bottom of your sonar screen,” grins Ike. “Well, where the ‘hair’ stops and the bottom goes bald is where you want to start looking for Smallmouth.”

Iaconelli finds the majority of these bald spots with his sonar, but also admits that sometimes he can spot them with his eyes because they look like 100 â€“ 300′ long blue holes in contrast with the surrounding water.

Once he or his transducer have the bald spots located, he combs them with four primary lures. Admitting, like most Bassmaster Elite Series anglers in the August 2013 tournament, that a drop shot rig caught the majority of his fish.

“When the wind blew, and the fish were more aggressive, I could catch them with a 3/16 oz. tube on 6-pound fluorocarbon, or by cranking a Rapala DT10 or DT 14,” said Ike. “But when the wind stopped blowing, the surface slicked-off, and the bite got tougher – that’s when I had to use the either the traditional drop-shot, or what I call the ‘Power Shot’ with a big ½ oz. weight.”

The “Power Shot” is a drop-shot rig with highly oversized components.  Instead of 6-pound line on a spinning reel, Ike bumps up to 10-pound line on a baitcaster. Then, in place of a tiny hook and finesse worm, Ike uses a Berkley soft jerk bait on a large 4/0 worm hook. “I’m trying to get their attention with the Power Shot rig,” says Ike. “It’s like throwing a big ¾ oz. football jig for largemouth â€“ when that big weight hits the bottom it’s like a cannonball â€“ it creates a disturbance that they have to come investigate.”

No matter the lure, Ike stressed that none of the 47-pounds of Smallmouth he brought to the scales came from within the vegetation. “No matter which of the four lures I used, I never fished right in the weeds. I always fished right on the edge of the weed line, or mostly, in the middle of the bald spot,” stressed Iaconelli.

This time, bald really was beautiful. Pretty like a $10,000 tournament paycheck.