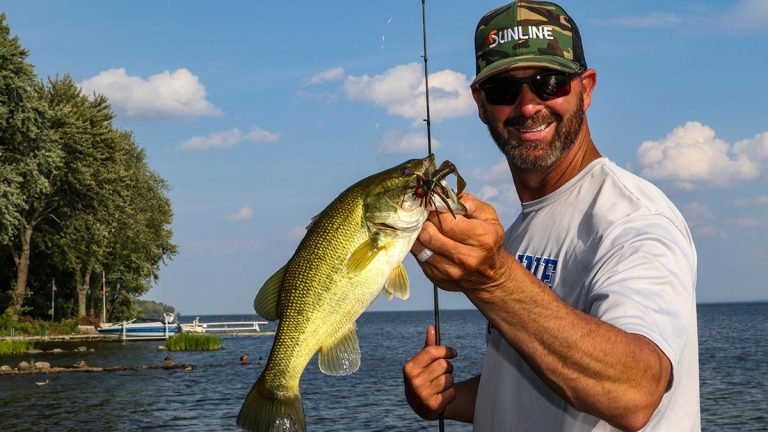 Gerald Swindle can be a shady character â€” but only in the sense of strategically using his Humminbird’s shading function to help him dial in the most promising shoreline areas for his day of bass fishing. Cover, such as docks, laydowns and pad fields certainly factor into the overall picture, but the Bassmaster Elite pro first considers water depth; more specifically, areas where deeper water swings closest to the bank.

These are the ideal areas for dock skipping and for locating backwater pockets boasting serious pad fields. Fishing offers no guarantees, but savvy location selection will always represent a significant ingredient for the success recipe.

Case in point, during a recent outing on Lake Oneida, Swindle wanted to skip a few docks. After a short idle, he eyeballed a row of respectable boat holders about a football field to the left of the launch ramp.

Well, that obviously was not the plan, as Swindle gave that Mercury the giddy-up and he blasted across the lake and swung into a little cove with a modest collection of docks, along with dense lily pads extending way back into the inner reaches. The explanation for Swindle’s selection defines a principle that’ll serve anyone targeting shoreline targets.

“I had the shallow water setting at 3 feet on my Humminbird, so it shaded everything in the lake that was 3 feet or less in red,” Swindle said. “Earlier in the day, I went out to a little section of docks and the red line was really tight to the bank, which means the shallow water goes pretty narrow and I caught a couple of fish. That’s why we started here.

“I’m using the shallow water shading like you’d use a deep water highlight. You can read that red line and see which banks in the lake are deeper closer to the seawalls and docks. Sometimes, the steepness of a bank can be the key.”

Swindle noted that the 3-foot depth rule remains constant for just about any lake he fishes, as anything less he considers unsafe to run. But there’s nothing wrong with double dipping on the features and benefits.

“As soon as you get a bite in one of those areas, you can ask: ‘Is there a pattern to the shading?’ If that graph can be patterned, I can run it. I think a lot of fish are caught by good fishermen using the shading function on their graph before they even start fishing.”

“I can enhance the color shading and make the deeper water more royal blue, so when I’m running down a creek at 50 mph and everything is wiggling around, I can see that darker blue and I automatically know there’s a deep creek channel there,” Swindle said. “So by adjusting that shade, I may be more enticed to go fish that area.”

Now, identifying the deepest water in the area may mean the difference in one or two bites or not getting a bite, but Swindle knows it helps eliminate water and maximize his time.

“Based on the time of year, you have a basic idea of what the fish might be doing and the areas you might be fishing, so set your shallow water, set your deep water and start fishing,” Swindle said. “But pay attention to the (depth) shading along with the sonar.

“There are more fish caught with your finger on your graph than on your rod. The days of just turning on your graph and going fishing are pretty much over.”