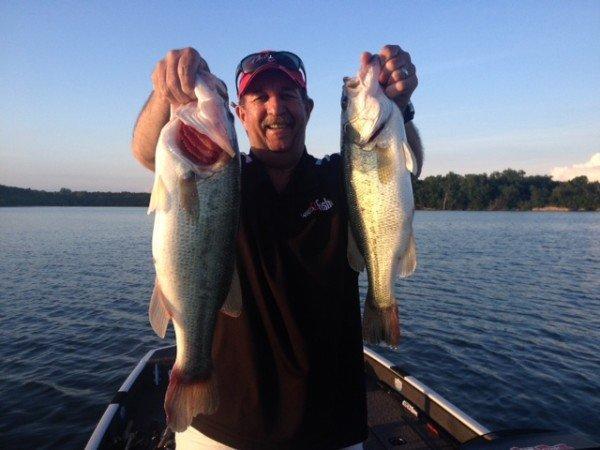 I have never been to the movie Titanic, have never have seen even parts of it, I know how it ends.

I am the last person to try a newfangled gadget and television info-mercials never get a second glance, most of the time, although I do like the Endura buff KVD endorses. Feel the same way about most stuff he talks about. Hard to beat success, I guess.

Although I have seen most of the new baits each year, new electronics and state of the art rods and reels I am usually the last guy to go overboard on any of them. Do I like them, you bet. Would I like to try them, yes sir. But overwhelmed, never.

That disposition has saved me some dough too but started to change for me when Gene Eisenmann talked to me about his Hydrowave. He ran into me at an event or a trade show, hard to remember which, and he talked in length about his ManCave, but that day never mentioned the device he was building in his factory. He did later though and I had to have one as a result. Never a question, never a second guessâ€¦I will always have a Hydrowave. His story told me all I needed to know. The research was solid, the biology proven and he canned it in a small black box that costs around 400 bucks.

Gene is a businessman but more importantly he doesn’t take wild chances. Everything he touches has a method, a rhyme and a reason, and he too is a die-hard angler. He works hard but also plays hard and always wants the best. His gear is the best, his boat is the best and he created the Hydrowave to be the best at his craft that he could be.

No question, the Hydrowave is not magic. The fish do not fly into the boat and there are nuances to its use that only experience can tell you but it does make fish, all kinds of fish, do crazy things. It lights them up and I have a confidence level when it’s on that I will catch more fish. Do I? Nope, but I put most of that blame on me and not the Hydrowave or the fish. You still have to know where they live and you still have to know how to fish. What it does do though is it makes fish in the area your boat is sitting curious.

There have been days on the water that would have made excellent cartoons. Fish smacking the surface, eating air shad, or the day the musky made a U-Turn and put his nose on the speaker. Priceless. I have even brought shad to the surface and had birds diving when otherwise they were perched on a power line or a nearby tree. The Hydrowave activates something in the fish that tells them they have to check it out.

This past week my summer intern from the University of Illinois, Luke Stoner, and I went to shoot some photos and do a video or two on deep water summertime fishing. I never get in the boat without turning it on. It was hot, little wind and it was the middle of the day. We fished two points and after dropping the speaker attached to my trolling motor into the water started noticing shad coming to the surface. Some just flipping but others smacking the water. After a few moments we saw bass chasing in them and we put a few of them in the boat. Coincidence, maybe, but it happened on every stop.

Fishing has been tough a whip leather for the last few months on my favorite mud-hole and weights had been awful but two nights before our trip I had one of those nights. I had 6 fish that night with the largest at 7.02 and a bag that weighed in the high teens. Fishing deeper water, 16 to 19 feet, but with the Hydrowave on delay “Power” and the volume at 3 I was able to have a great night. Again coincidence? Maybe, but it with the other special trips I have taken proved to me this “gadget” flat works and gives me the confidence to always want it on.

Fishing is okay but catching is the reason I go and the confidence the Hydrowave gives me by being able to activate the fish is the reason I use it. Keep your Veg-a-matic and your Pocket Fisherman, and even the Chia Pets but I am a believer in the Hydrowave and it’s far from a gimmick in my book. I will always have one running on my boat.

Tackle Warehouse carries them and they are $389.95