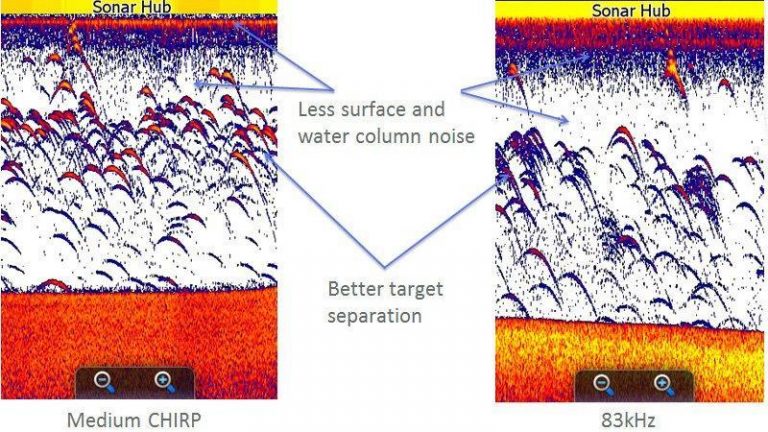 Basic sonar was a joint effort between the U.S. and British in World War I.

Side Imaging was developed by the U.S. Navy Mine Defense Lab in the 1950s.

CHIRP Sonar, the latest buzzword in fish-finding technology, is no exception. It was also developed in the 1950’s as a military technology, and it’s recently been introduced by all the major fishing electronics manufacturers.

Cool sounding name aside, there has been precious little information produced about what CHIRP sonar is, what it does and how you can use it to catch more bass.

For help with that, I sat down with Jacob Scott – a product expert with Lowrance, and learned all about the details. 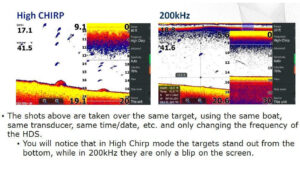 CHIRP is an acronym for Compressed High Intensity Radar Pulse, and it’s not so much a new type of sonar, but rather a better way to process and display traditional 2D sonar.

“CHIRP was developed by the Navy to provide better deepwater penetration,” Scott said. “Traditional sonar relies on just one or two different frequencies to provide all the information to the processor, which limits the level of detail that can be produced.”

Instead, the CHIRP sonar generates an image using a wider range of frequencies, which allows the processor to produce a much more accurate and detailed sonar image of fish, structure, or the bottom.

“For freshwater use, 200 kHz is the most commonly used frequency with traditional 2D sonar,” Scott said. “Without CHIRP, it would produce continuous pulses at 200 kHz. With CHIRP technology, the system will shoot one pulse at 160 kHz, then the next at 161 kHz, then 162 kHz, and all the way up to 200 kHz, and then it would start over.” 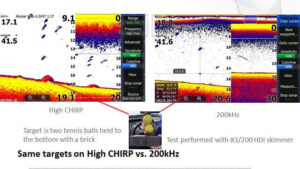 How does CHIRP work

By using bursts of different frequencies, units with CHIRP technology are able to compensate for inconsistencies in the way different objects and materials reflect the sonar pulse.

“Different objects, whether they are fish, plankton, or brush piles will reflect better or worse with different frequencies,” Scott said. “By scanning over multiple frequencies, CHIRP units can produce much more detailed images than non-CHIRP units.”

How can CHRIP help you catch more fish

As mentioned, adding CHIRP sonar to your electronics suite will provide measurable gains to a number of important aspects of a sonar image. For that reason, it’s a no brainer that anglers who rely heavily on their sonars will benefit the most from adding CHIRP.

“One of the most impressive things that CHIRP does for anglers is that it provides anglers an unprecedented representation of the water column and a much better picture of a bait in the water,” Scott said. “With CHIRP, we’ve been getting target separations of less than two inches, making it easier than ever to differentiate your weight and bait while drop shotting. Having that level of detail gives anglers a much better idea of how bass react to their baits and will be a huge hit with the vertical fishing crowd.”

Another huge improvement CHIRP technology provides is in image clarity, which can be a big deal for ledge fishermen that frequently try to categorize the images of fish on their units.

“Without CHIRP, lots of times you’ll just see random schools of fish on your locator, but don’t get much more than that,” Scott said. “With CHIRP, the clarity improves to where you can differentiate the size of the individual fish in the school. It will let you more easily differentiate big shad from small shad for example, or a school of perch from a school of white bass.”

“Sometimes when predatory fish like bass or stripers are associating with bait fish, it can be hard to distinguish them from the image of the bait,” Scott said. “By utilizing multiple frequencies, CHIRP sonar allows you to see those predatory fish even if they’re inside a ball of bait or directly under it. For guys that like to fish offshore, it’s really going to be a game changer.” 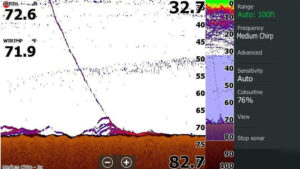 How to get CHIRP

The ability to use CHIRP depends greatly on the brand and model of electronics you use, so make sure to check with your manufacturer for specifics.

Lowrance units that are CHIRP capable include all the Elite CHIRP models, all HDS Gen3 Touch models, and all HDS Gen2 units (with SonarHub). Lowrance users also don’t need to purchase a separate transducer for CHIRP, as the technology is already built in to any Lowrance skimmer transducer.

Raymarine Dragonfly units as well as all A, C, and E series multifunction displays (with CHIRP modules and compatible transducers) can display CHIRP sonar. 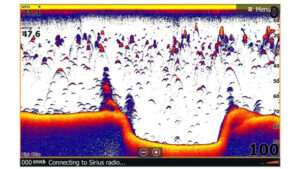 EDITOR’S NOTE: As we experiment more with this technology, we’ll share more screen shots and tweaks to get the most out of your CHIRP units in future features on Wired2fish.Â