Bladed swim jigs for bass fishing are an often forgotten weapon among anglers. When the bass aren’t responding to traditional bladed lures such as spinnerbaits, these lures tend to shine and produce giant limits of bass.

Since my college fishing years, I’ve developed quite an affinity for bladed swim jigs. Regardless of the weather conditions, fishing pressure or time of year, they seem to consistently catch some of my biggest bass of the yearâ€”I even won the biggest tournament of my career using this lure.

I usually like to keep my equipment and presentations as simple as possible, but I make an exception with this technique. After a lot of experimentation with different trailers, I’ve developed a lot of confidence in 5 specific styles. I’m sure you can catch a few bass on other kinds, but I think you’ll enjoy even more success if you try these this year.

On almost any fishery you visit, you’ll be able to find big bass if you can locate a substantial population of shad. In order to determine whether or not the bass are actively feeding on shad, I look for two specific thingsâ€”surface activity and puke. Sure, the latter is a bit gross, but hear me out.

It doesn’t matter what time of year it isâ€”I’m always on the lookout for surface activity. Whenever I see random surface flickers, sporadic bass boils or big bait balls next to my boat, I assume the bass are feeding on shad. In addition, I pay very close attention to the bass I catch. I look in their throats, feel their bellies and watch them as I reel them to the boat. If they’re gorging on shad, you’ll often find regurgitated shad on the water’s surface and their bellies will feel “mushy”.

If you notice any of this while you’re fishing, it’s always a great idea to use a Zoom Salty Super Fluke as a bladed swim jig trailer.

It took a lot of consideration for me to include the Mann’s HardNose Swim Toad on this list. Not because it’s not effective, but because I’ve won a lot of dang money on this combination. Threading a topwater toad on the back of a bladed swim jig sounds weirdâ€”and it isâ€”but if you’re looking to catch a bass over 5 pounds, this is one of the best ways to do it.

In my opinion, the size and vibration of this arrangement make it very special. Bladed swim jigs aren’t necessarily bulky, but adding the HardNose Swim Toad almost double its profile in the water. As you retrieve the swim jig through the water column, the legs kick and move wildly, creating a tempting “thump” that bass have a hard time passing on. You probably won’t catch quantity on this concoction, but if you can keep it in your hand long enough, you’ll likely catch a kicker fish. 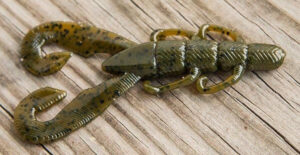 Although it’s most commonly used for flipping and pitching, the Yum F2 Mighty Craw is an excellent bladed swim jig trailer for all occasions. It’s super soft, resulting in outstanding action and it’s fairly durable, which saves both money and frustration.

If I’m fishing in water clarity that’s less than 2 1/2 feet, I’m probably going to start with this trailer. It displaces a lot of water, but it’s still subtle enough to fool finicky bass into biting.

Two things can wreak absolute havoc on a hot bass biteâ€”post-frontal weather and fishing pressure. Whenever the fishing gets tough in a tournament or on a guide trip, I’ve started to instinctively reach for the Yamamoto Swim Senko. When you pair it with a similarly colored bladed swim jig, it’s deadly on bass throughout most of the year.

Whether I’m fishing grass lines, docks or shallow rock, I’ve developed a lot of confidence in this trailer.

One of the easiest waysâ€”if there is such a thingâ€”to find larger than average bass is by locating shallow populations of bream. I’m no biologist, but I have to think a bass would rather eat a big, meaty, slow-moving bream instead of a tiny, fast-moving shad. Think of it like thisâ€”would you rather walk to your kitchen to eat a delicious steak or drive down the road to grab a pack of crackers from the corner store?

The Strike King Rage Tail Shellcracker was originally developed to flip and pitch on its side, but I’ve really enjoyed using it as a swim jig trailer for the past year. It doesn’t have many extremities, but its tail displaces a lot of water, imitating a wounded bream perfectly.

Sure, a bladed swim jig is a bona fide fish catcher, but don’t assume any ol’ soft plastic trailer will do the job. Pay close attention to the available forage, cover and water clarity and try one of these trailersâ€”I catch a bunch of bass on ’em and I think you will, too. 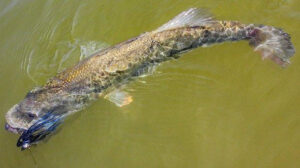