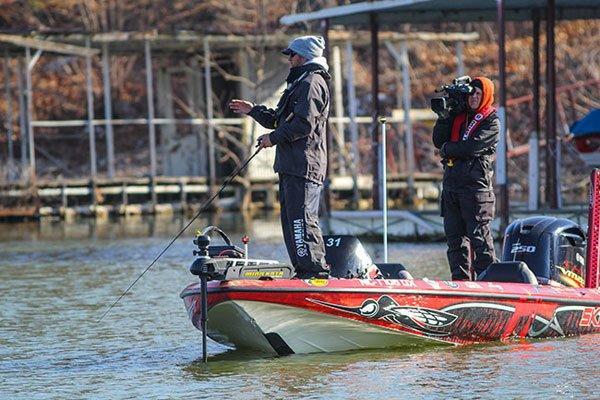 When many of us think of bass fishing in cold water, we envision uncomfortable temperatures, finesse gear and deep water. While deep fishing techniques can certainly yield nice catches in the colder months, you won’t find Elite Series pro Hank Cherry doing it. In fact, cold water often means the exact opposite for him—shallow water fishing.

We had the opportunity to chronicle his impressive showing at the 2013 Classic on Grand Lake and his approach to the brutal conditions caught our eye. While a large number of competitors were congregated on deep water points and brush piles, he had the shallow water all to himself.

“Like Grand Lake, Lake Norman is a deep lake,” Cherry said. “People tend to get confused and think that bass always suspend in depths of 30 to 40 feet in cold water—that’s not the case. The colder the water gets, the shallower the bass suspend.”

Throughout this year’s Classic, his theory held true. After experimenting with several different deep water areas in practice, he began focusing his efforts toward shallow water. The results were immediate.

“If I was marking bass on my Lowrance in 18 to 20 feet, I wouldn’t spend much time in that area,” Cherry said. “I knew they weren’t ready. It’s all about time management and being in the right place at the right time. When I returned to those areas later in the day without marking fish in deep water, I’d fire some casts shallow and really catch them.”

Although the late winter shallow bite gets better as the day progresses and the sun gets higher, don’t be afraid to hit some shallow areas first thing in the morning. The first hour of daylight can get these fish in some abnormally shallow water.

“In rocky lakes, bass will migrate from nearby deep water throughout the night to feed on shallow rocks,” Cherry said. “Even though the sun isn’t high yet, you can catch the tail-end of a major feeding period if you get to your shallow areas at the very beginning of the day. They’ll back off into deeper water soon after daylight, but you can bust ‘em again once the sun starts beaming.”

Clues to look for 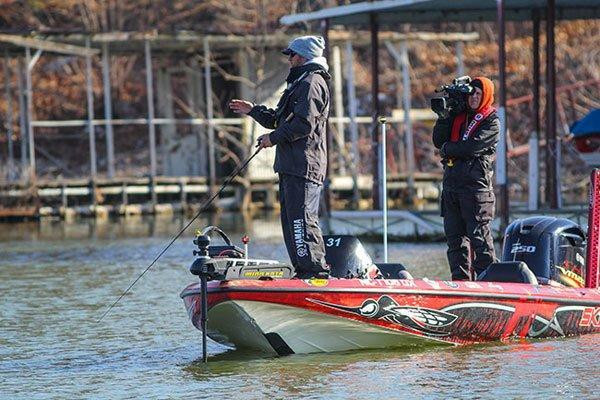 Sun positioning and feeding periods are important to successful shallow fishing in cold water, but there is a particular biological phenomenon that makes it consistent. If you’re not paying close attention, you’ll probably miss it.

“When cold water causes a massive shad kill, I really believe that the majority of shad go toward shallow water to die off,” Cherry said. “It’s extremely important to keep an eye out for occasional flickering or other types of surface disturbance. Just because it’s cold doesn’t mean big bass won’t move shallow to take advantage of an easy meal.”

To detect a possible shad kill, Cherry makes sure to keep his head on a swivel at all times. As he’s working his bait, you’ll see him constantly scan the water’s surface, searching for any irregularities. Bass are very opportunistic predators, so if you find an area with dead or dying shad, big bass are never far behind.

As anglers, we all have a tendency to make things more complicated than they should be—that’s what keeps us coming back for more. Throughout the late winter, however, Cherry makes a concerted effort to keep his bait selection and methodology as simple as possible.

When conditions call for a jerkbait, Cherry opts for a Megabass Ito Vision 110+1. He’s not too particular on colors, but prefers a blue-colored back in cold water. To make the most of the bait’s enticing action, he recommends a 7-foot medium-heavy rod with 12-pound Seaguar InvizX fluorocarbon line.

“I use fluorocarbon on everything except my topwater baits,” Cherry said. “I’m a big believer in jerkbait fishing with it during the late winter because all too often the bass just nip at the jerkbait. The low stretch and sensitivity of fluorocarbon lets me detect bites as soon as possible, translating into more fish catches this time of year.” 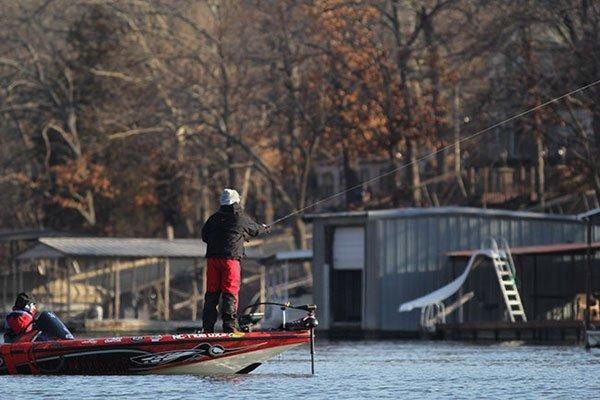 Cold water bass can quickly become wise to heavy fishing pressure, so Cherry tries to find areas that are off the beaten path.

“I don’t particularly like fishing obvious things that everyone can see or notice,” Cherry said. “I have a ton of success targeting sandy bends and gradual sandy points. I like to focus on areas with a softer drop to them that allows bass to easily move from deep to shallow water. Again, I can’t stress it enough—the presence of shad is everything in the late winter.”

If he’s got a jig in his hand, it might as well be springtime—Cherry specifically targets ultra-shallow floating docks.

“The black underbellies of floating docks hold heat in cold water,” Cherry said. “The water underneath them is often a full degree warmer than the surrounding water. It may not seem like that big of a deal but it makes an enormous difference. I’ll flip a 9/16-ounce jig around these docks as shallow as I can possibly get it. It’s a great way to catch some giants.”

As we grit our teeth and push through the last bit of this year’s winter, don’t be intimidated by the cold water temperatures. Resist the urge to fish deep water and give shallow fishing a shot. If you know what to look for, what techniques to use according to water temperature and the proper areas to target, you’ll wish you had tried it sooner. 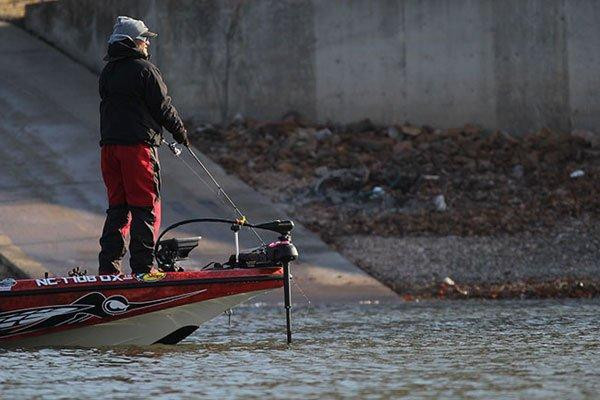