Got your attention, didn’t we? Bass react to crankbaits much the same way you probably are right now to that statement… “What was that?” You hear or see something and then you get curious and come in for a closer look. Sometimes it’s just annoying, sometimes it’s really good and you want more. You pounce on the stuff that looks good. Sometimes you pounce on the stuff that just annoys you too. Same with the bass on a favorite crankbait.

We were thinking about crankbaits recently and discussing with some pros how they can be very regional. On the Tennessee River system, a Bomber Fat Free Shad and Strike King 6XD have become legends on the ledges. On the Ozark White River Lakes in Missouri and Arkansas, the Storm Wiggle Wart has carved out a niche for itself. In the Carolina’s, the Poe’s Cedar crankbaits made a name for themselves, thanks to the prowess of guys like David Fritts and David “Smiley” Wright. Flat sided crankbaits in East Tennessee have been guarded secrets of the pros for years

But after covering the Bassmaster Classic in Shreveport last month and a recent trip or two in Kentucky, we’ve seen how effective one particular crankbait is in cold water, regardless of where you are in the country. The Rapala Shad Rap.

The Rapala Shad Rap has been around for several decades and yet it’s ability to catch big fish has stood the test of time. It’s a simple shape and size that mimics a wide variety of forage. It comes in four different sizes so you can effectively cover water from 1 foot to 14 feet or so. It comes in about every color imaginable but most anglers will keep it to 2 – 4 colors usually.

Over the last couple of decades, it’s really carved its niche with bass fishermen hunting bass in cold waters. The fact that many fisheries clear up in the winter, and the very natural styling and subtle side to side rolling action of the crankbait make it tremendously appealing visually to the fish.

Ott Defoe used a Rapala Shad Rap to post a top-five finish in his first Bassmaster Classic on a fishery where a Shad Rap probably wasn’t even considered an option by most locals or the rest of the Classic field for that matter. In practice he was able to come through areas behind other competitors and catch some big bass. That’s another key attribute: it’s diminutive profile makes it a great follow up crankbait in crowded waters.

Northern anglers have long used the Shad Rap to tempt bass all seasons of the year and it’s equally deadly on other game fish, like walleye up north. I’ve had some unbelievable days fishing a shad rap in Minnesota, Wisconsin, New York and other places on natural lakes. Again it’s profile and size and color options give you the ability to match a lot of local forage in the northern climes.

In the Midwest, the Shad Rap has proved to be effective for not only largemouth but also big smallmouths and spotted bass too. Several recent outings have proved that to us in water ranging from slightly muddy to slightly stained. Again color options and the larger No. 8 and No. 9 lures give you a lot of options and flexibility.

Our first point yielded a small keeper and a couple non-keepers. The second point yielded a 6-plus-pound bass that fell for the No. 8 Crawdad Shad rap. Our next couple of banks weren’t productive, so we jumped to another bay. It wasn’t long before Bolton had a chunky 4-pounder take his Shad Rap after a slight change. he picked up a No. 8 in the new Dark Brown Craw. A few casts later and Bolton boated one weighing more than 6-pounds as well.

In the prespawn, fish will begin migrating from their main lake and deep water haunts and start matriculating back into bays, pockets and creek arms feeding up, staging and eventually moving shallow to spawn. Staging is nothing more than when bass group up in schools, usually in a little deeper water, to forage and wait for conditions to get optimal to move shallow, spread out to start making nests and pair up for the spawn. Fish will group on channel swings, points, ditches and channels near adjacent flats and bays where they will spawn.

Often Bolton will start on the main lake and work into pockets and the mouths of bigger bays and cast the Shad Rap around to the bank and bring it out into the deeper water. If there have been several warming days in a row, the fish will often get shallower and up on the banks more. Wind and water color can also move them a lot shallower so he likes to have a variety of sizes and colors available to him.

Bolton will fish the baits on two basic setups. A medium-action Lew’s spinning rod with a Lew’s spinning reel or a Lew’s Custom Pro jerkbait baitcasting rod with a Lew’s baitcasting reel in a 5:1 or 6:1 ratio. With both setups he uses Sufix Pro Mix 10-pound line. He likes that line size so he can land bigger bass with some confidence and also because that size and smoothness of the monofilament line casts well on either a baitcaster or spinning reel.

“That line is so smooth and it has some stretch, which is extremely handy with Shad Raps because their narrow wobble and profile will enable them to get into some crevices and you’re going to have to be good at popping them free,” Bolton said. “But with this mono it’s got some stretch but not as much as most other mono which makes it really good at pulling slack and popping a hung Shad Rap free without having to go up and get it. I’ve caught some big bass popping it off a stump like that too.”

Bolton keeps a variety of sizes and colors on his deck and will alternate depending on depth and water clarity. 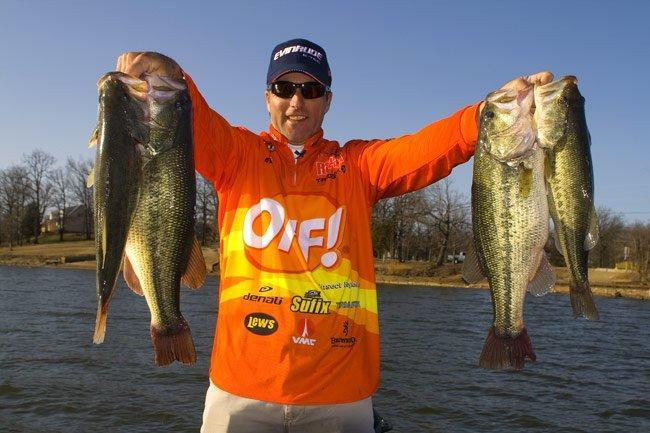 Bolton really pays close attention to the banks, size of the rock, available cover when searching with a Shad Rap. He also is constantly searching for those subtle transition places where bass can move up from deeper water to a shallow flat quickly. The bass will often move up and feed on those small flats right next to deep water and then slide back off into deeper water and wait for the water to warm up.

As far as fishing the Shad Rap, slow and steady is the norm.

“I really don’t do anything fancy with a Shad Rap,” Bolton said. “It seems to me over there years that the fish just prefer that slow steady craw where you’re just occasionally ticking the bottom and the bait is just easing along really unassuming.”

Most of the times the bites are just going to feel like a little more pressure on the rod. That’s why it’s so important to use a rod that gives you great feel and a forgiving tip. Not only can you feel bites and subtle changes better but a whippy tip will allow the small bait to load harder and let you really catapult the bait out there on a hard whip of the rod.

So it works from Canada to Louisiana and everywhere in between. It’s subtle wobble makes it perfect for lethargic bass just getting back to feeding. That natural profile, action and colors of the bait make it a great follow up lure in pressured waters. The range of sizes enable an angler to cover depth zones from the bank out to 12-14 feet. Difficulty casting in the wind can be overcome with a larger size or more finesse spinning tackle and lighter line. It truly has no boundaries and that’s why we think it’s the best coldwater crankbait ever.