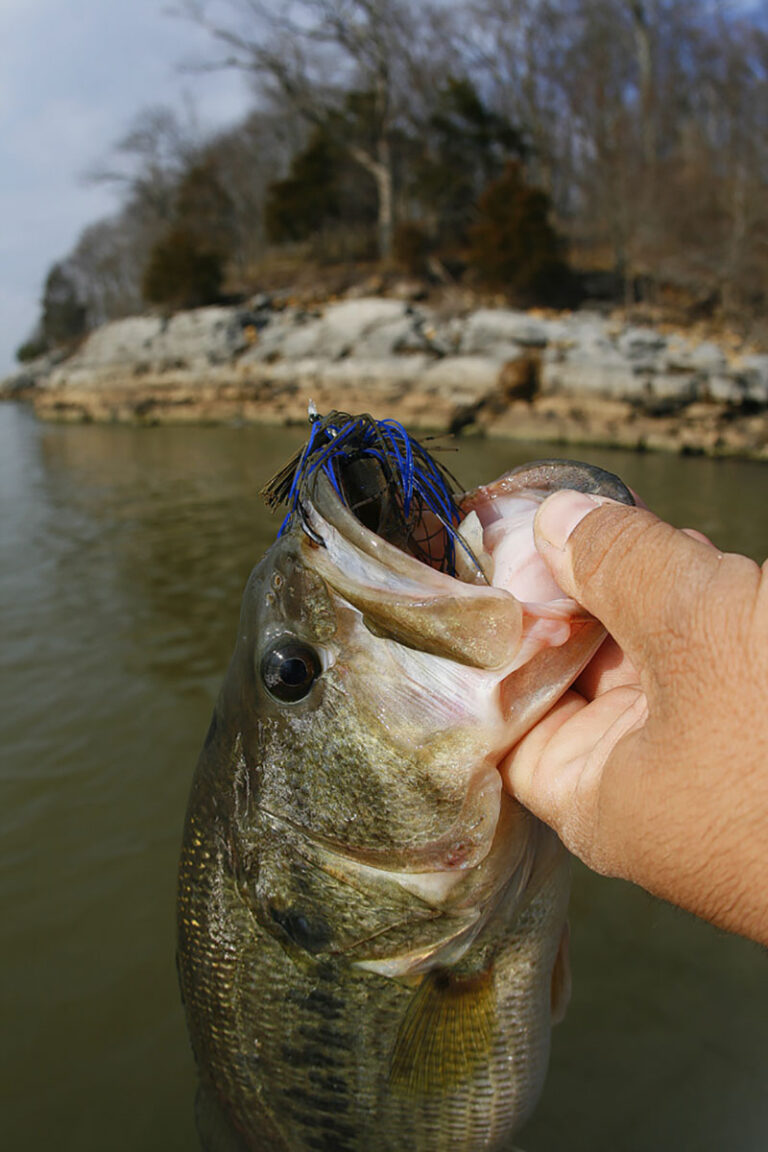 What has always appealed to us about bass fishing is the puzzle. Understanding and gaining experience from different situations breeds confidence. Part of being successful is knowing how to attack the different seasons and the other part is knowing how to attack different forms of structure and cover. And then what tools best entice the fish given those two things combined yields success and fun days on the water.

One thing readers have been asking about is how to attack bluffs, both visible above the water and concealed underneath it. The big mistake we see novice anglers make is making up their mind that they need to be fishing bluffs and not understanding that it’s like any other structure. You don’t just meander through a flat covered with standing timber, or start flipping matted grass in acres of matted grass. You have to figure out what’s going on in the area under the water and attack those intersection points.

We talked to a very successful bluff angler recently and picked his brain about how he targets and effectively plucks off bass from them. FLW Tour pro Dan Morehead has had a bunch of success targeting bass relating to bluffs and was a little reluctant to let the cat out of the bag. 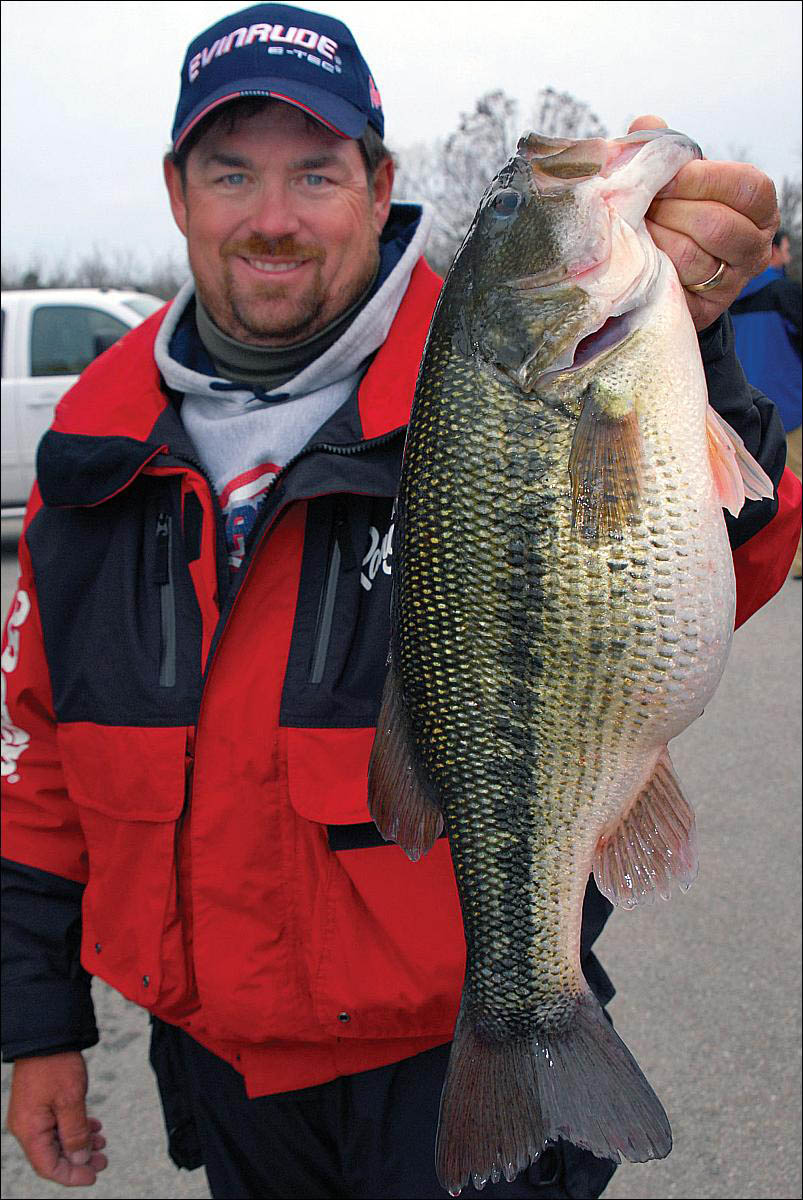 “Bluffs have been my little secret for a while because it seems like not a lot of anglers are fishing the channel swings and bluffs above and under the water,” Morehead said. “It seems like when we get to the prespawn, everyone is targeting points and pockets and not really looking at what the channels are doing. I like to look for channel swings which are nothing more than bluffs underwater.”

A channel swing is one of the most productive areas to find prespawn bass and yet many anglers still don’t understand this bluff creating option. A channel swing is simply an area where a creek or river channel turns, runs along a bank, then turns back away from the bank. At times it happens on a point, other times it happens on a regular bank. Sometimes you can see the noticeable change in rock on the bank. Some channel swings are far enough off the bank that the bluff is actually masked by further sediment and erosion above the water line.

Channel swings aren’t the only bluffs anglers can fish. But often it can make finding feeding zones a lot faster because it offers distinct transition zones. Before the channel swings in close to the bank there will often be a flatter bank and generally smaller rock, gravel or even clay. Then as the channel swings in closer, the rock will change to large chunk rock, boulders or bluff rock. Then as it swings away again there will be another distinct transition from steep sheer faces to more gradual broken up rock.

Obviously the cover on a bluff can have an impact on the productivity and fishing along the bluff. Many bluffs are lined with standing timber at various depths. You can also have rock slides that form underwater points, piles and other irregularities in the otherwise sheer contour. Obviously these changes in areas and cover can hold forage and more importantly offer bass an ample feeding zone.

According to Morehead, other things clue him to better bluffs than others. The presence of baitfish is not only important but can be the tell when it comes to reading the bass’s bluff. How the baitfish position on the bluff can determine their activity level and what bait imitators will be most effective. 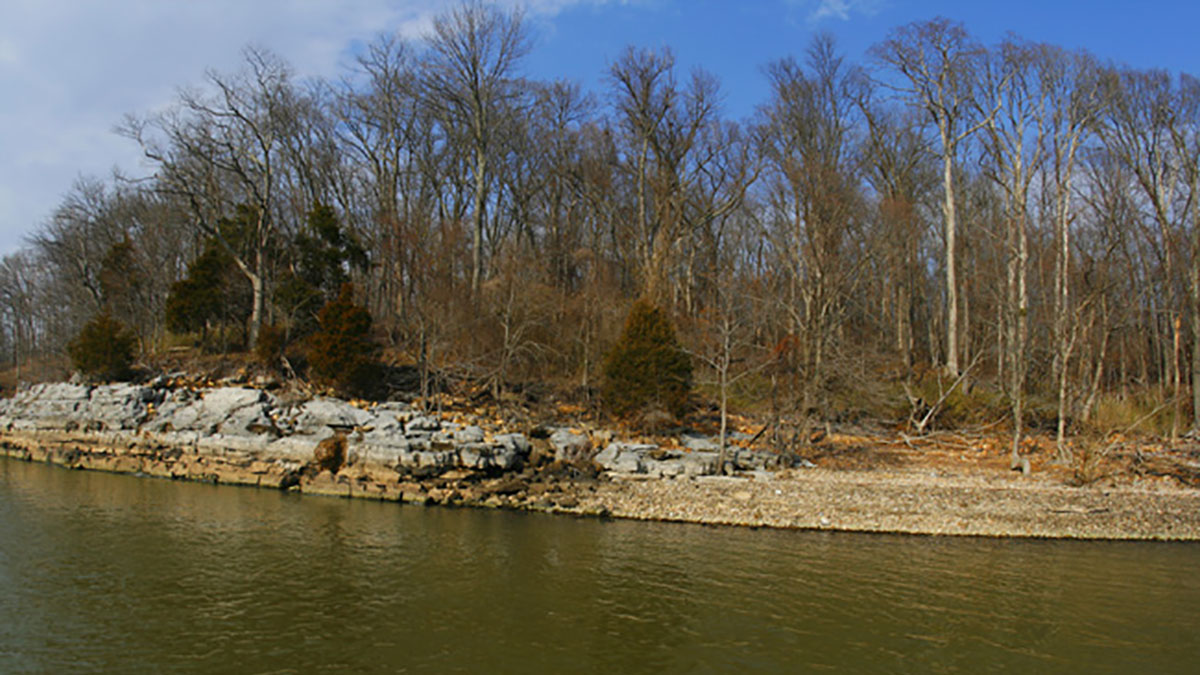 “The baitfish will position in different places,” he said. “Sometimes the bait is suspending and that is where the fish will move in and feed. Other times the bait gets out deep on the ends and you have to fish out there. But it’s all about locating where the channel kicks in and kicks out. The wind will position the bait a lot of the time where you can target the bluffs.”

One of Morehead’s favorite bluff lakes is Table Rock Lake in Southern Missouri. He loves the lake and has had some solid finishes there fishing bluffs. He’s also had great success on Kentucky Lake, Lake of the Ozarks, Beaver Lake and other highland impoundments and river systems across the Midwest and South.  But Table Rock is where he’s had the fondest memories.

“It’s taken me 15 years to learn a lot of spots where bluffs offer those swings and adjacent feeding flats,” he said. “I caught a 6-pound, 15-ounce spotted bass a few years ago in an FLW Tour event on Table Rock fishing a bluff. There was a bluff that came to a point and the channel swung away and right on the end of it there was a big ole cedar tree there. Those bluffs setup perfect. It was a good bluff, had wind on it, and a big isolated piece of cover that made targeting a bass on that particular bluff easy.”

You can find a bluff on just about any lake. Obviously river impoundments will have a lot more, but many lakes have bluff type banks in the backs of bays that hardly get worked properly. Often that last swing of deep water in the back of a bay can be a secondary staging area that can really congregate bass.

Terry Brown and I fished some bluffs and channel swings on Guntersville a few springs ago and had some banner catches and limits topping 25 pounds on several days fishing small isolated feeding zones along the swings and bluffs. One we literally found looking at a map after having success on another one. The thing to remember is that it may not look like a bluff above the water but if a channel swings in close to a bank, there is a bluff under the water somewhere. It’s knowing and reading that lip and stair stepping rock and using lures that can effectively cover the water column vertically as well as horizontally that will give you success catching bass on the river.

Morehead will fish spinnerbaits, crankbaits, jigs, and jerkbaits have become his staple presentation when the water clarity allows, but his latest addition to the arsenal has become the Alabama Rig. Morehead targets those same suspending bass that fall for jerkbaits with 5 baits at once and loves the new found success on the castable umbrella rigs.

Lifting and dropping jigs down steps of rock on bluffs and swings is extremely effective. Morehead recounted many trips where he was dragging football jigs out 30-40 feet deep on the flats at the ends of the bluffs where the channel turned away from the bank or point and catching wads of bass staging to move up when the water warmed.

Crankbaits and spinnerbaits can be equally effective, albeit in different ways. When the bluffs get a bit of tinge to them in the early spring and waters begin to warm, colored water can make bass feel comfortable enough to rise up in the water column and get close to the faces of the bluff. This is when tight parallel presentations down the bluff can be effective crankbaits and spinnerbaits fished horizontally.

Bluffs are often associated with gin clear water and fishing vertically. That can be effective of course, but we had a recent outing with Bandit 200 and 300 crankbaits where the water had muddied and there was a bit of current on the bluff corners and little points created by jutting outward rocks. The bass were right against the rock. In fact, you had to put the crankbait on the rock face and by the second or third turn of the handle you were leaning into a fish.

Jerkbaits like the Megabass Ito Vision 110 have become mainstays in pro angler tackle boxes on bluff lakes like Table Rock, Beaver Lake, Lake of the Ozarks, Wilson Lake in Alabama, the canyon lakes out West and southern border lakes in Texas. The ability to draw bass from depths with erratic actions and sounds and then sit motionless, with a taunting scowl, has made them very effective on bluffs.

Often targeting bluffs with cover like deep standing timber can be a very effective technique with the jerkbait. Often times the bass can be relating to suspending schools of bait hanging near the bluff faces. We often start working parallel down a bluff, then fan out as we get to the swings on the ends of the bluffs making multiple casts onto the flatter sweeping banks at the ends of the bluffs.

Wind, overcast and sun can move the fish around on a bluff. Morehead recalls several times where cloudy days drove the fish deeper and he had to use things like jigs and drop shots to target the bass. Where on sunny days he’s caught big fish burning spinnerbaits high in the water column. Wind can position baitfish closer to the rocks, cause fish to move up higher in the water column and make them a little more willing to chase a little. So it’s wise to note the conditions and adjust if you’re not getting bites targeting one zone or area in the water column along a productive bluff.

Bluffs are like any other target in fishing. Whether it’s humps, ledges, points, docks, seawalls, grass beds or bluffs, there are multiple variables to consider. Fish it all until you figure out the pattern inside the structure. Maybe the fish are up on the flat ends of the bluffs. Maybe they are holding on isolated pieces of cover or rock slides on the bluffs. Maybe they are suspending on the bait. Maybe they are up against the rocks because of wind and water color. Fish it all until you figure out the key spot along the bluff and then chances are you can run that key spot on several other bluffs.

Closer to the spawn we’ll have a feature on bedding bass on bluffs.