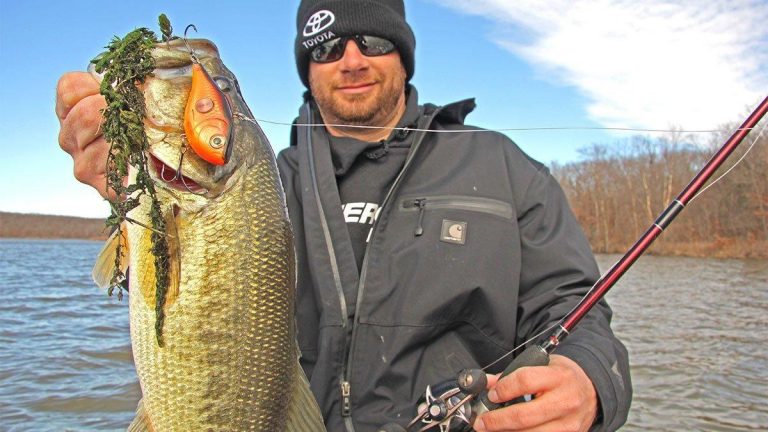 My buddy hollered a reminder to grab a pack of hand warmers stored in the truckâ€™s door pocket as we launched into the dingy 44-degree water and readied for what would surely be a day dominated by suspending jerkbaits, tight wiggling Shad Raps and heaven forbid, an Alabama Rig.

Two hours later, when all those offerings had failed, I thought about what Kevin VanDam taught the bass fishing universe on the frigid waters of Lay Lake when he won the February 2010 Bassmaster Classic with seemingly superhuman qualities.

VanDamâ€™s dominance en route to lifting his third Classic trophy should have taught us lipless crankbaits are never to be discounted in cold, winter waterâ€”especially when aquatic vegetation is present.

And sure enough, memories of his mind-boggling performance in frigid â€˜Bama became the conduit to heating up the action with several forearm-jarring strikes on a day when more famous winter lures such as jerkbaits failed to shine.

VanDam talked about making contact with rocks and stumps in Beeswax Creek when he won on Lay Lake. For us amateurs, it was more about ticking the tops of 3-foot tall stocks of coontail vegetation growing in about 8 feet of water.

The point is, no matter the habitat, as is the case with diving crankbaits, contact is key with lipless baits too. And honestly, this may be the most critical and challenging aspect of lipless crankbait fishing. Itâ€™s a bit of an art form to control the depth of the bait; if you retrieve too slowly, you bog down in the weeds. Move it too quick and you miss bite-triggering contact. Just barely ticking the tops of the vegetation at a slow but steady pace is critical.

The right rod, reel and line

These are just tools. But they are tools that lead to more productivity and amid the coldest part of winter, you donâ€™t want your reel working too fast. VanDam makes no secret of his love for a slow 5.3:1 Quantum cranking reel. And we werenâ€™t far in front of him with our fairly gradual 6.1:1 SL100SPT Smoke reels.

With water temps in the low 40s, itâ€™s not the time for freaky fast gear ratios. Because youâ€™re fishing quite possibly the most infamous lure ever made when it comes to bass shaking free once hooked, itâ€™s critical to use a rod with a spongy enough tip to allow for maximum hook penetration yet stiff enough as you move south on the blank to pull the bait free from thick stalks of vegetation youâ€™ll inevitably bog down in from time to time. 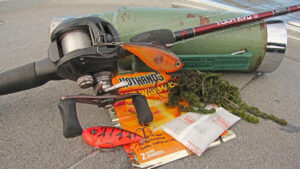 I choose what I consider to be one of the most versatile rods ever made designed by the man himself; a 6-foot 10-inch Tour KVD model TKVDC6106F that I not only throw lipless cranks on, but also buzzbaits, spinnerbaits and even lightweight 1/4-ounce jigs and wacky-rigged Senkos.

Line is a little less critical. Itâ€™s more a case of what works for you. You can go as low as 12-pound monofilament or as high as beefy braided line; just know thereâ€™s a give and take to each. Personally, I favor time-proven 15-pound Berkley Trilene Big Game monofilament. Itâ€™s got enough stretch to let the bass eat these easy-to-shake-free lures, plenty of strength to help me jerk the lure free from the weeds and yet itâ€™s not so thick that it sacrifices lure action or my ability to get the bait a little deeper if needed.

The popularity of red lipless rattling baits in late winter and early spring is a well documented one.  Some theorize itâ€™s because bass are dialed-in to crawfish.

â€œI donâ€™t buy the red crawfish idea,â€ Gilliland said. â€œThe water is way too cold for an abundance of active crawfish to be present. Besides, crawfish donâ€™t swim fast across the tops of weeds. I think red works more so because itâ€™s more visible in dingy water than chrome or other popular colors.â€

VanDam leaned heavily on a shade of gold Sexy Shad when he won the 2010 Bassmaster Classic, stating that red didnâ€™t seem to work as well. For us, red worked better than the popular chrome and blue, likely because of the dingy water.

Point is, water clarity and color largely dictates the best color of lipless bait to tie on, but some shade of red is always worth trying and may well be your best choice during winter and early spring.

While thereâ€™s no disputing the popularity of lipless crankbaits across the historical landscape of all-time great bass lures, they are far too often overlooked in favor of jerkbaits, jigs, umbrella rigs and other lures during fishingâ€™s coldest weeks on the calendar.

â€˜Til summer comes around, itâ€™s time to give far greater credence to the effectiveness of a lipless crankbait.