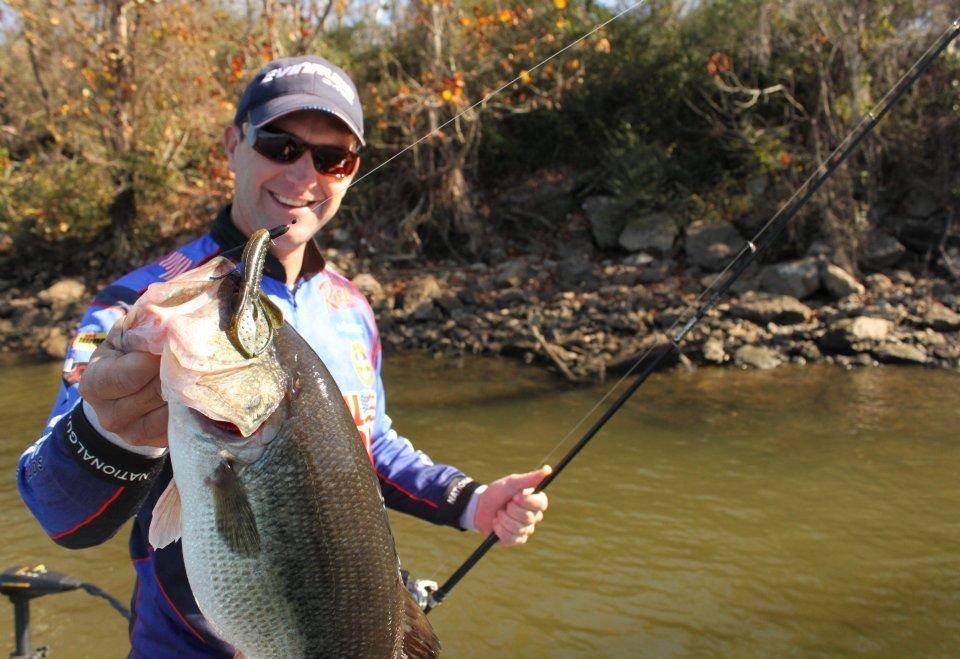 Fall came and went for us here in the south like a beautiful woman just flirting to make her boyfriend jealous. There was no time to enjoy her company because by the time you knew she was here she had already stormed off leaving you cold and confused. For those who were able to partake in the fall fishing fun, congrats. For the rest of us, it’s time to bundle up and brave the cold as the frigid nights start to turn the thermostat down for the bass as well.

National Guard pro Jonathan Newton of Rogersville, Ala. has fished the winter pool waters of Alabama and beyond. As the water temps begin to fall and the shad migrations reach their peak, he has discovered that there’s a definite turning point in how to approach fishing for these bass. The active chasing along the surface starts to decrease, and anglers have to rely more and more on electronics to find bait and bass.

However don’t get too excited when you see 10 clouds of bait on your graph in one pass because that’s not necessarily the indication you’re in the right spot. Too much of a good thing is actually a bad thing, and it becomes more and more evident as you try to fool the bass that have now located and gorged on shad for weeks if not months.

“In the fall, the bass follow the bait fish from the river back into the creeks,” Newton said. “If an angler spends enough time on a lake, he can actually follow the migration too and catch them really good early in the fall as the first groups of shad get into the creeks.”

The problem arises when all the shad hop the train and end up filling a creek with succulent silver treats for munching bass. The option to stay and stick it out is yours, attempting to somehow trick the keen-eyed bass into biting something other than their version of manna from Heaven, but it’s not recommended by Newton.

You actually want to find an area without an overabundance of forage. Three or four balls of shad in an area of a couple acres can be just enough to pull the bass in without conditioning them to the real thing to the point they won’t bite anything else. Sometimes this can be an area that the shad haven’t quite congregated to or perhaps it’s an area where the majority of the shad have come and gone.

If shad aren’t still popping the surface giving you any visual indications of the population then Newton recommends a quick pass through using your units to scan the area.

“As the water temp drops the baitfish don’t come up as much,” said Newton. “You might see them up late in the afternoon when the water has warmed up but for the most part you have to rely heavily on your electronics.” 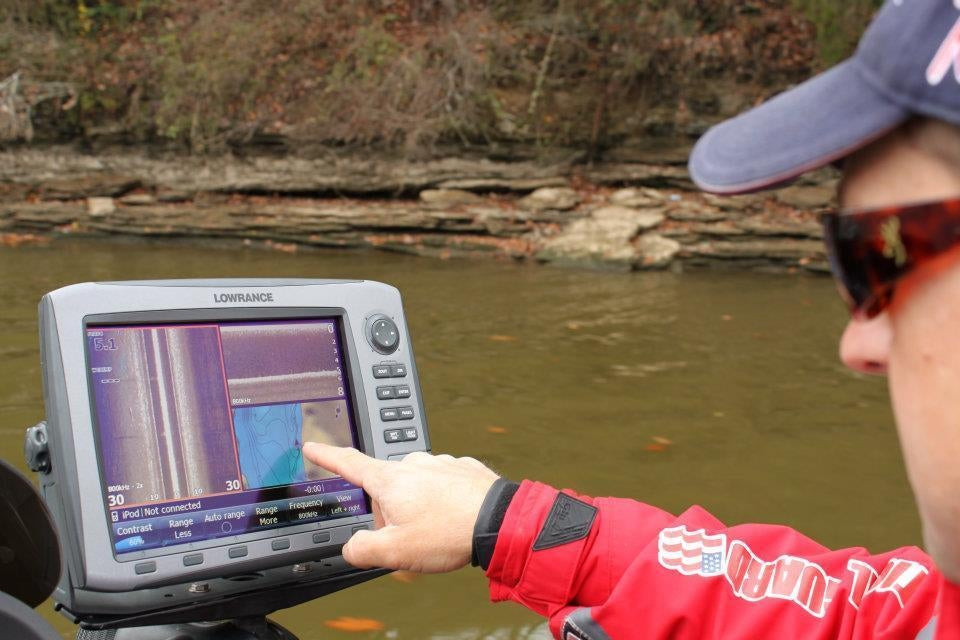 Newton uses his Lowrance Structure Scan to idle around the backs of bays and creeks in search of schools of shad. Again the key is seeing some shad but not too many. Shad and fish may be in any part of the creek but the best place to start you search is on the last bluff wall or chunk rock bank going in to the backs of the creeks. The steepness of the bank is an indication that the channel swings in close to it. Newton takes advantage of this natural funnel and uses it to coral the bass and baitfish.

“You can take your boat right down the middle of the channel with the steep bank to one side and typically a shallow flat to the other,” Newton said. “This way you can fish the chunk rock and bluffs or fish the flat which is sometimes good too.”

Newton uses a standard assortment of lipless crankbaits, spinnerbaits and buzzbaits on the 1 to 3 feet deep flats and will keep the spinnerbaits and buzzbaits in play on the deeper side but also employ a jig, square bill crankbait and Zoom Z-Hog pitching bait. The water on the “deeper” side is typically still a mere 4 to 8 feet deep as is the case throughout the country, deep, is a relative term.

Matching the hatch is usually a good place to start when fishing around baitfish so Newton will search for spinnerbait blades that adequately mimic the size and flash of the shad or look for a lipless or square bill that best exemplifies the characteristics of the real thing but sometimes it is good to step away from the same old same old.

“I use a Zoom WEC E-1 in chartreuse and black,” he said. “It’s my go to crankbait on the Tennessee River when I want to offer the bass a little something different.”

One of the keys to catching bass with the E-1 is picking clean every piece of wood left available once the water has fallen to its winter pool. Presentation is key, and you basically have to scrape the bark off the tree from every angle looking to place the crankbait directly in front of a bass no matter where he might be on the log.

Remember these fish for the most part have stuffed themselves slap full much like ole Uncle Ned on Thanksgiving. Now they have made their way to some limb, knob or other fishy recliner and are in a shad induced coma. Even though that fish is literally stuffed to the gills he’s still Uncle Ned at heart. You go and slip a piece of chocolate cake by his nose, he’s going to eat it.

Some days the fish will relate more towards the bushier trees with lots of limbs. Some days they will concentrate on the straight barren logs. Then again there are some days where the fish will focus solely on the chunk rock. Newton recommends that you take each day as it comes and focus on where and how you catch each fish trying to build a pattern as you go.

Pitching the Zoom Z-Hog on a lightweight can also offer the fish an alternative option to the shad that they have become accustomed to. This eliminates the importance of attention to detail since it looks nothing like a shad and works best along any wood you might find. Zoom’s latest color in the Z-Hog, scuppernong, seems to work best as an all-around color for Newton.

A little stain to the water helps all these techniques and usually isn’t a problem in the late fall and early winter as weather and draw downs tend to put a little color in the water. If the area receives a lot of rain and the creeks muddy, it isn’t a bad thing. The more color to the water, the easier it is to fool the fish. Newton will make small adjustments to his approach to offset the change in habitat.

Replacing willow leaf blades with Colorado blades helps add a little thump to pull the fish, and using a square bill or jig with a rattle will help the fish locate the bait quicker. Don’t be scared to throw a topwater in the colder water either.

“I have actually caught them good in 47 degree water on a buzzbait, and that’s a lot of fun this time of year,” Newton said.

As is usually the case with bass fishing, an open mind will go a long way. Don’t think that just because the air temperature is freezing the bass aren’t actively feeding. Experiment and don’t get stuck in a rut fishing the same set of trees because you caught bass there a few days earlier. Try to find an area with some shad, sample some cover there and focus on the last steep banks occasionally firing a cast or two out to the adjacent flats.

This time of year you can load the boat while bass fishing without fighting for the best spots, but you’ve got to change gears a little to tempt shad-gorged bass in the early winter draw downs. 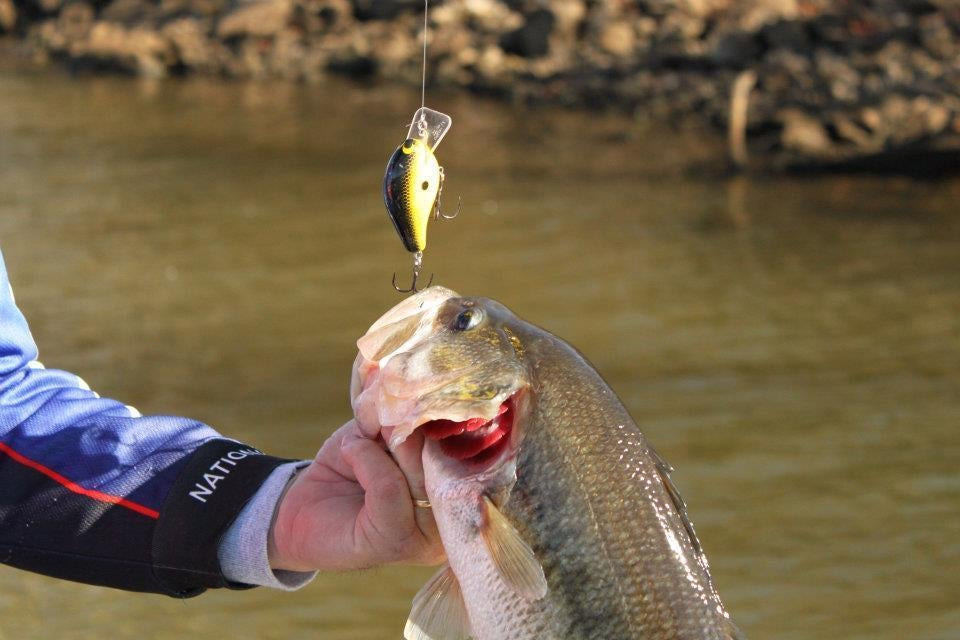