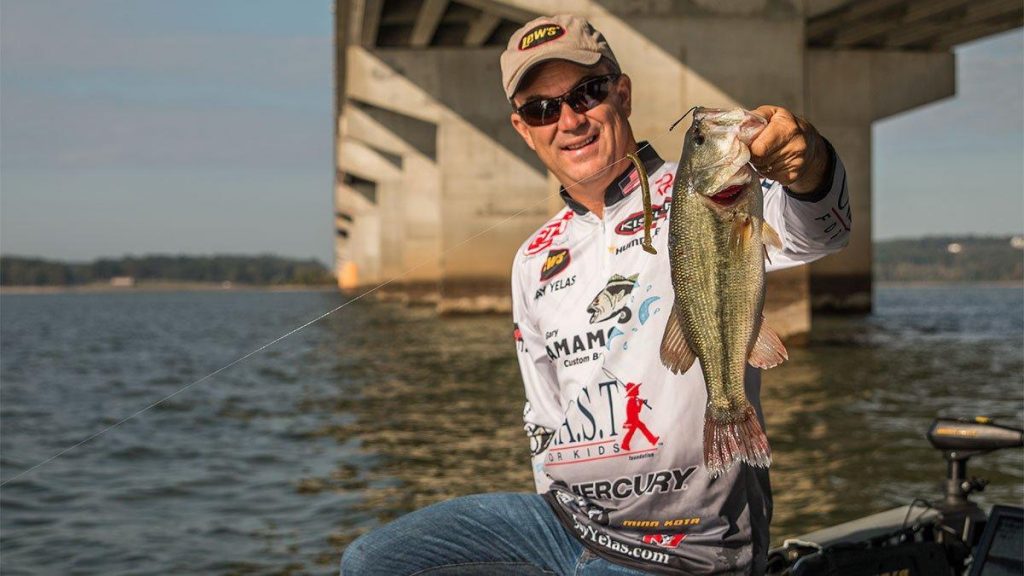 Winter bass fishing can be a formidable adversary. The fall bite was outstanding due to the huge population of shallow batifish, but now things begin to slow down; water temperatures are dropping and the bassâ€™ metabolism is slowing, resulting in very small windows of feeding activity.

According to FLW Tour pro Jay Yelas, bridges are some of the best places to fish throughout the winter. Hard, rocky bottoms, adjacent deep water and vertical habitat combine to offer these coldwater bass everything they could possibly need.

There are 4 tips, however, that will increase your chances of success and make those chilly days on the water worth your while.

1. Donâ€™t get lost in stereotypes

When most of us think of bridges, we envision giant causeways spanning a large area of water. While they certainly offer excellent winter bass fishing, Yelas suggests spending some time locating older, more overlooked bridges as well.

â€œMost of the bridges youâ€™ll find on your fishery will be large concrete bridges,â€ Yelas said. â€œBut if youâ€™re able to find old wooden bridges, such as a railroad bridge, you can absolutely wreck the bass. You wonâ€™t find them as much in lowland-type fisheries such as the TVA or Texas, but theyâ€™re fairly prevalent in the northern states.â€

If youâ€™re lucky enough to find these wooden gems on your local fishery, make sure you keep your skirted jigs nearby. Yelas prefers a 1/2-ounce jig with a Yamamoto Double Tail Hula Grub for a very particular reason.

â€œWooden bridges are basically giant docks in my mind, so Iâ€™m going to dissect them in a very similar fashion,â€ Yelas said. â€œIâ€™ll start my pitching a small, compact jig to the outside pilings towards the very middle of the bridge. I want to start with what I believe are the deepest posts because thatâ€™s usually where the bass will be positioned.â€

Vertical habitat is an enormous factor in wintertime bass fishing. Everything underwater is essentially in slow motion; the baitfish are barely moving, the bass are rarely eating resulting in miniscule feeding windows. Winter bass only need to feed once every several days, which makes this habitat especially appealing. 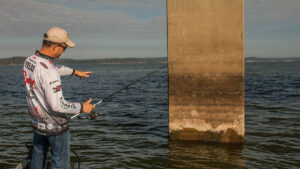 â€œSharp, vertical drops give bass the best of both worlds,â€ Yelas said. â€œThey can suspend off these break lines when theyâ€™re inactive, but they also have very quick and easy access to shallower water when the need to feed presents itself. In other words, theyâ€™re able to feed efficiently without exerting too much energy.â€

In order to capitalize on this lethargic wintertime behavior, Yelas targets bridge pilings positioned on or near a dramatic depth change. For example, if a piling is situated in 20 feet of water and just a few yards away the 50-foot deep river channel cuts under the bridge, youâ€™re likely to get some nice bites.

â€œI spend a lot of time with my Humminbird Helix looking for the river or creek channels underneath bridges,â€ Yelas said. â€œNot only do both the bass and bait use them as major migratory routes, but theyâ€™re also prone to wash a lot of brush against nearby bridge pilings. Whether itâ€™s trees or logs, theyâ€™ll act as small current breaks and ambush points for coldwater bass.â€

3. Timing can be huge

Perhaps the biggest key to winter bridge fishing is timing. It takes a lot of time on the water to fully master, but Yelas stresses the importance of confidence.

â€œThere will be fish right now on just about any bridge you find,â€ Yelas said. â€œSo if youâ€™re not getting bites, donâ€™t let it mess with your head. Winter bass rarely bite all dayâ€”sometimes theyâ€™ll only bite for 10 or 15 minutes and you have very little time to capitalize on it. But to increase your chances, target these bridges when thereâ€™s a fair amount of current. It tends to position the fish on the riprap corners and you can drag a jig in 20 or 30 feet of water and catch a bunch of them.â€

Because bridges often bottleneck bait and bass into a confined area, donâ€™t be afraid to fish the same bridge several times throughout a single day of fishing. There will usually be activity in the area, but as is the case with a lot of scenarios in fishing: Itâ€™s all about being at the right place at the right time. And if you donâ€™t get it right on your first stop, try again in a few hours. It can make a world of difference. 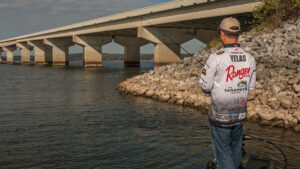 Lure selection can overwhelm many anglers, but add cold temperatures and lethargic bass to the mix and it can become even more daunting. Yelas uses a select few lures throughout the entirety of the winter and they all have one theme in common: Small and slow.

As mentioned earlier, jigs are an excellent choice for crawfish-hungry winter bass. Yelas sticks with a 1/2-ounce size as it forces him to fish slowly in order to maintain bottom contact. His rule-of-thumb is simple: If you canâ€™t count each individual rock, youâ€™re fishing too fast.

â€œWhen Iâ€™m fishing pilings near river or creek channels, Iâ€™ll always have a 3/4-ounce silver or gold jigging spoon rigged and ready to go,â€ Yelas said. â€œThis bite is at its absolute best when those schools of shad are positioned close to the bottom, within a few feet. Thatâ€™s when you can catch astronomical numbers of bass.

Love â€˜em or hate â€˜em, umbrella rigs can work wonders throughout the winter. If local regulations allow, they can produce some of the most ridiculous fishing of the year.

â€œIf you slow-roll an umbrella rig with 3 1/2 or 4 1/2-inch Yamamoto Swim Senkos but a concrete piling near a sharp depth change, you have a great chance of catching some huge bass,â€ Yelas said. â€œThis rig is also good on riprap corners and on the upper-lip of river channel bars.â€

It can be difficult to beat a suspending jerkbait in cold water. The long pauses and sudden, erratic movements trigger a reactionary instinct that can make even the most stubborn winter bass attack.

â€œIâ€™ve had a lot of success using the Yamamoto Tenkuu in especially cold water around bridges,â€ Yelas said. â€œYouâ€™ll catch some on the pilings, but it seems as if the corners are best-suited for great jerkbait action. Remember to fish it very slowâ€”sometimes with 15 second pausesâ€”and keep a small bow in your line throughout the pause. You wonâ€™t always feel the bite so when you see your line jump, itâ€™s time to set the hook.â€