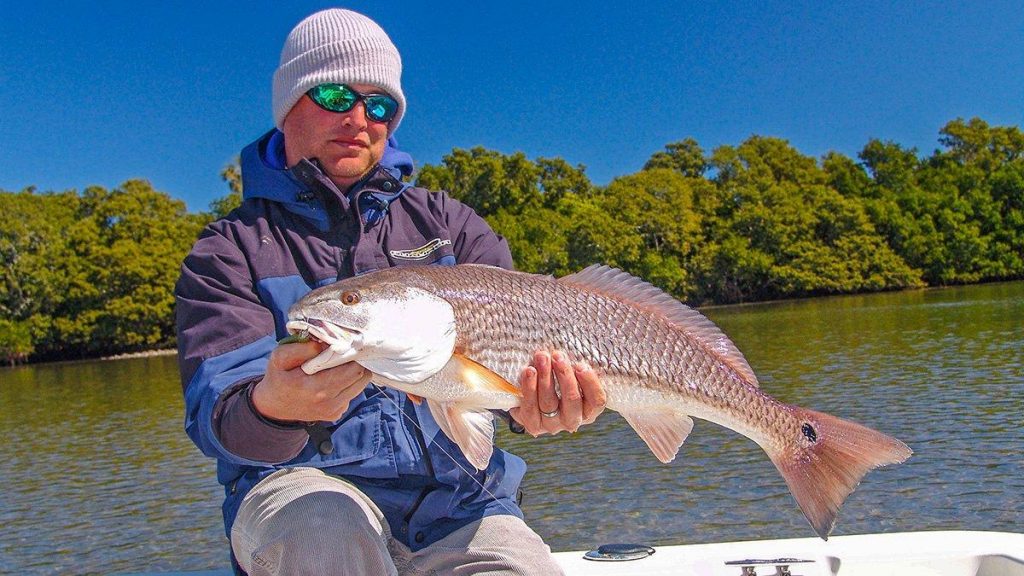 Late fall and early winter see most of the Southeastern Atlantic and Gulf of Mexico’s coastal waters turning gin clear, and no matter how sneaky you think you are, you’re not fooling pressured redfish. Engaging clear water reds is all about understanding their tolerance levels, how various environmental factors influence this gamefish and how to work with what the day gives you.

Areas of largely turbid water, such as the Mississippi Delta and Mobile Bay see definable pockets of clear water, but for simplicity, we’ll stick to the classic grass/sand bottoms found throughout Texas, Florida, Georgia and the Carolinas.

Although a comprehensive explanation of redfish tactics defies a single sentence summation, this little truth nugget will frame the majority of what you’ll face in the fall-winter season:

Considering the access limitations of low-tide periods, the stealthy demands of gin-clear brine and the fish’s amplified feeding priority during a season of baitfish scarcity, angling opportunity hinges on daily ebb and flow. 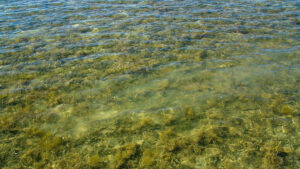 A cold morning found redfish tournament anglers Brian Ulch and Heath Seckel heading toward a small marshy islet on Anclote’s east side. We came in from the south and shut down outside a large sandbar blocking out northwesterly approach. For the next 300 yards, Seckel would use the trolling motor to sneak into the target zone – a tidal trench tracing the oyster-studded mangrove shoreline of notch in the islet’s contour.

“We need to float back to the fish that are in there feeding,” Ulch said. “They’re probably in there for the same reason – because crabs and shrimp are being pulled by the wind and tide back into this little bottleneck.”

With a low, incoming tide, we’d see the morning’s opportunity level steadily rise; but not before paying the penance of patience. Ripping into the shallow interiors of coastal islands risks irreparably damaging the fragile sea grass so vital to local ecosystems (as evidenced by several prop scars carved by reckless boaters incapable of responsible shallow-water navigation).

The other biggie – you’ll spook every redfish into the next zip code.

As we eased toward the shoreline, we swept across a lush sea grass pasture dotted with subtle potholes that sank below the blades. Redfish often tarry in these depressions while awaiting the incoming tide; but despite our diligent watch, occasional “dust clouds” signaled spooked reds that had eluded our eyes until they could no longer tolerate our proximity.

Note: Clear water plus clear conditions certainly help anglers spot fish, but if you can see the fish, they’ve already seen you.

With the water level creeping higher, our glacial approach alternated between low speed trolling motor propulsion – occasionally augmented by a 10-foot push pole for directional corrections during wind gusts – and the brief Power Pole pauses that allowed the tide to get ahead of us.

As we waited, we caught scattered glimpses of redfish belly flashing, tailing and pushing water in the deeper areas behind us. A few times, we attempted to silently approach these fish on push pole power, but the ensuing lesson in futility returned us to our primary mission.

Predictably, those deeper remained outside of our longest casts, as the boat’s pressure wake, along with the tall figures clearly illuminated by bluebird skies sounded the alarm. Our only option: Hold our ground and wait for the rising water to usher reds into the shoreline feeding zone. 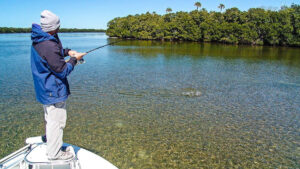 After nearly an hour of waiting and watching, the telltale wiggles of advancing mullet indicated sufficient tide height for redfish. The two commonly mix and we’d soon reach close enough to the shoreline to spot several cases of blended pods.

Around 11 a.m., Seckel noticed a fish traversing the shallow grass and a picked up the small keeper with a well-placed cast. After Ulch added a twin, the anglers agreed to hold their fire until they spotted a serious rod-bender.

That commitment would require them to pass up a dozen or more easy targets, but suffice it to say that the wait was justified when Seckel spotted a 30-inch redfish rooting around the edge of that tidal trench. A weedless-rigged Berkley Gulp! Sinking Minnow immediately tempted that nimble nose, and a spirited battle concluded with a copper warrior gleaming for the boat-side glory shots.

“That was just classic redfishing,” Seckel said of the fish’s foraging behavior. “I just had to let him find it.”

This morning required plenty of patience, but it was a textbook example of winter fish behavior.

“With more water over their backs the reds felt safer from the ospreys and eagles that frequent the Anclote islands, they felt less visible in the nearshore zone and, most importantly, they had access to the food-laden mangrove/oyster edges. It just had to get right and water depth was the critical element.” 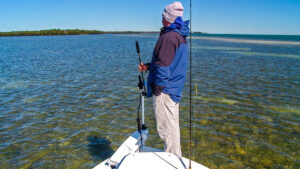 Stalking clear-water redfish can be a nerve-racking game and missed opportunities are seldom recovered. Here are a few tips to tilt the odds in your favor:

You can’t control the tide, but you can control how well you maximize the opportunities it brings. Winter fishing is generally some of the year’s toughest, so don’t blow your chances when those sweet periods occur. Make the most of your incoming or outgoing scenarios by considering these points.