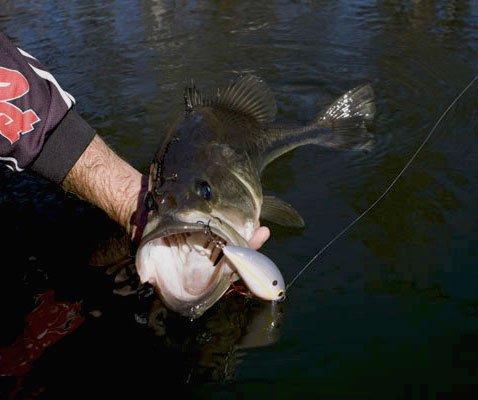 If you’re like us, you don’t have enough fingers or toes to count the number of times you’ve heard fellow anglers banter back and forth about the effectiveness, or perceived lack thereof, of red hooks. You’ll find a couple of them scattered about in random compartments of many anglers’ boats, but most of us never pay them much attention. Truth be told, I only buy red hooks when I’m in a rush to the lake and the local tackle shop is out of black hooks. Sure, they look sexy, but do fish really care what color hook you’re using?

A recent conversation with bass fishing legend Jimmy Houston has turned Vicious Fishing pro Marty Stone into a bona fide believer in red hooks. Under the right conditions, he has had some monster days with his Daiichi Bleeding Bait hooks. Recently, Stone shed some light on the colored hook conundrum and provided us with a lot of interesting food for thought.

Remember when red fishing line was the big talk in the fishing industry? As a young teenager, I thought it was the bee’s knees, guaranteed to turn me into a pro overnight. The allure of red line was simpleâ€”the fish couldn’t see it, and when your line is virtually invisible, you’re going to catch a lot more fish.

Now, let’s look at it from an alternative perspective. While many fishing line companies were adamant that their red line was indiscernible, there were some hook companies claiming their red hooks to be the ultimate difference maker on the water.

So let’s get this straightâ€”red line is invisible, but red hooks make bass more apt to attack a bait? At this point, it doesn’t really matter who was wrong or right. Common knowledge would lead us to believe that someone, whether it was the line companies or the hook manufacturers, had to be wrong. Not so fast, says Stone.

Stone got the answer he had been looking for during a recent conversation with Jimmy Houston, who had taken part in a light penetration study. His findings were interesting, to say the least.

“In water of normal stain, considered to be 12- to 24-inches of visibility, a red hook is, indeed, very visible from 5-feet or less,” said Stone. “On the contrary, anything redâ€”whether it’s fishing line or a hookâ€”is going to disappear in more than 5-feet of water.”

Technically, both sides are right. Since learning that red hooks are, in fact, visible from less than 5-feet away in water of normal stain, Stone has noticed a substantial increase in his shallow water fishing success.

When to use red hooks

The use of red hooks is something that is becoming increasingly popular amongst the world’s top professional anglers. While not ideal in every situation, Stone has developed some very effective techniques for exposing bass’ weakness for red.

“Any time I’m flipping shallow water with a normal stain, I almost exclusively use a red hook,” Stone said. “If you’re struggling during a tough day on the water, don’t be afraid to tie on a red hook. It may take a bit to get used to, but I truly believe that you will catch more fish.”

The use of red hooks should not be limited to just flipping and pitching, however. Stone loves chunking shallow crankbaits, which has allowed him to experiment at length with red treble hooks. While effective, It’s not always as simple as throwing on some red trebles and going to town.

“If I’m throwing a squarebill that dives less than 5-feet deep, I always replace the front hook with a red treble hook,” Stone said. “I never put red hooks on the back because I want that big bass to attack the middle of the bait, giving me a great chance at getting a really solid hookup.”

Because bass can be triggered by a subtle flash of red like gills on a fish, red trailer hooks are outstanding on bladed baits, as well. When targeting sluggish shallow fish holding tight to cover, Stone uses red trailer hooks on his spinnerbaits and buzzbaits to give the bass a little extra “something” to hone in on.

Although he has had an enormous amount of success using red hooks, Stone believes that changing hook colors makes the biggest difference on bright, sunny days.

“The cloudier the day and the lower the light, the less that red is a factor,” Stone said. “For that light penetration to do what it’s supposed to do, you need to have a sunny day in order to get the maximum benefits from red hooks.”

The next time you are having a tough day on the water or getting a lot of short-strikes on a crankbait, switch to a red hook. While it may take some time to get confidence in it, you just might crack the code and enjoy some killer fishing. All it takes is one monster bass to make you a believer. 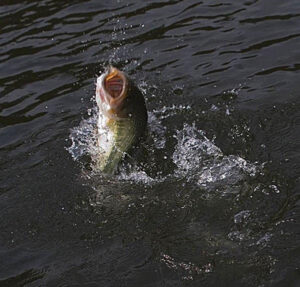