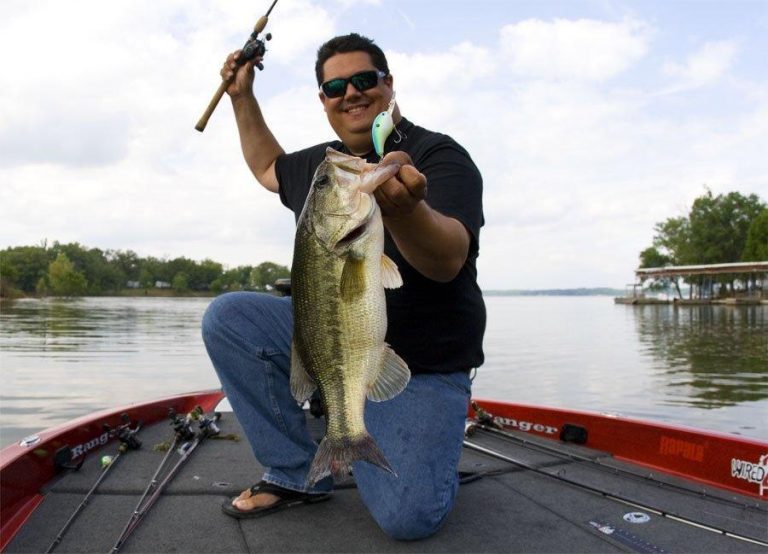 Time is getting right for some bass to start ganging up out deep. The bass have been spread out and paired up and found every piece of shallow cover they could find to ambush prey for the last month or two. But now the offshore reunion has started, and all the bass are throwing a big party and getting back with all their buddies from college and inviting the girls out to party as well.

Fishing offshore around when these bass first get offshore in big groups can be a lot like a college frat party. There are a lot of dazed and confused in the crowd ganged up in a small area. In short there are a lot of easily influenced targets to mess with. The same can be true when the bass first get offshore. These fish are not only easy to catch when you get them fired up, but their buddies just can’t wait to join in on the fun.

One of the best tools can be a deep diving crankbait. Not only is it great for firing up a school and catching a lot of numbers, but it’s a great search bait to find the schools and also to catch a big fish out of the school. The key though to being a good crankbait fisherman is choosing a combo that fits the way you fish a crankbait.

If you always fish slow and aren’t fishing all that deep, then a wispy combo might work fine. But you’re probably going to be worn out at the end of the day. There are a few aspects of a good combo that makes fishing crankbaits a lot easier.

First there are a few things about the rod that matter. You need to be able to handle the weight of deep diving plugs. They can weigh 3/4 to a full 1 ounce. That’s a lot of meat to heave out on long cast. If you get a rod that loads too much, i.e. has too soft an action, then you will be fighting yourself to make long accurate casts. A rod with a little backbone but a flexible mid range and tip can give you more control which can ultimately lead to more distance.

The other thing guys get real hung up on is sensitivity. A lot of the sensitivity can come from how you hold the rod and how the reel behaves.

Do you know why everyone loves the old Lew’s reels for cranking? It’s because the anti-reverse on those reels had a lot of play. That play allows the vibration of a crankbait to transmit better to the rod. With a solid anti reverse, the thump of a crankbait is muted a bit.

But people put too much into the sensitivity with a crankbait rod. Honestly if you wind a crankbait slow with a looser grip, the vibration is easier to detect. And on the flip side if you crank a bait extremely fast, you actually can feel when the crankbait contacts something solid a little better because there is a hard constant pull the entire retrieve and when it kicks off something, the pull is lessened.

Honestly I’ve now converted myself to throwing a medium-heavy rod for cranking deep divers. But don’t take it from me. Here are a few tips on why the medium-heavy rod works for the pros as well.

The other part of a good crankbait combo is the right ratio reel. Obviously most folks know you want a low gear ratio reel. The reason is because a lower gear ratio gives you more torque busting power. A deep diver pulls harder than a medium or shallow diving crankbait.

It’s like a parachute in the water or trying to put your boat cover on the boat in 40 mph winds. Suddenly that 1-ounce bait feels like it weighs 10 pounds in the water. With higher speed reels, the faster you reel, the harder that bait pulls because high speed gearing is not made to handle the torque.

Yet you can take the same bait on a 5.4:1 or 5.1:1 gear-ratio reel and reel it as fast as you can muster and still feel in control of the crankbait.  And as we talked about with Ben Parker in our recent crankbait article, speed can be the difference.

I know several guys that spool up with 8-pound mono, Parker included. Some folks think that’s crazy, but the 8-pound line works two ways. It allows the crankbait to reach a maximum diving depth because there is less drag in the water from the smaller diameter line. However it can also give you a few more feet casting distance. And according to Parker, that’s a big deal.

“Nothing is more important than distance with a deep diver in my opinion,” Parker said. “That’s because the further the crankbait goes, the more time it spends down in the strike zone. I feel like if a guy is only throwing a crankbait 30 or 40 feet, he might as well just throw another bait. I’m trying to get my crankbait out there 30 or 40 yards with a deep diver and cover more water and more angles with the bait with it in the strike zone the whole time. I can also stay further away from a school of fish, which I think at times is really key.”

So there are numerous reasons why a long, heavier-action rod, a good low-gear-ratio reel and light line can give you the ultimate deep diving crankbait combo. Hopefully you’ll get a chance to experiment with some of these tips in your cranking this year and let us know how you do.