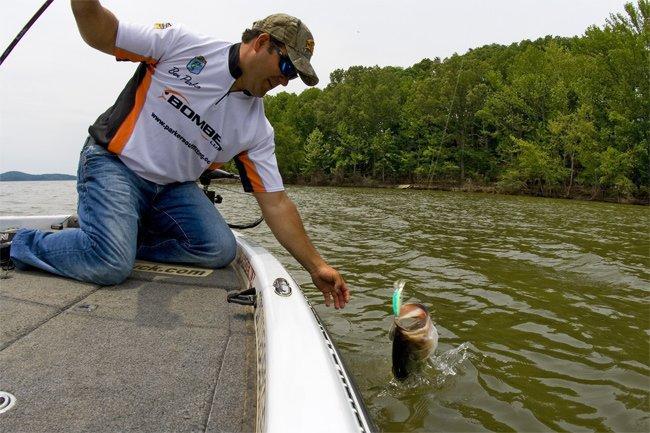 Bassmaster Elite Series rookie pro Ben Parker of Springville, Tenn., is an accomplished angler on the Tennessee River and has taken his fishing to the next level and learning as he goes at the top level of the sport. We’re going to be featuring his learning experience this season on the Elite Series in the next week or two. But we recently got to spend the day on Kentucky Lake with Parker talking about his theories on crankbaits.

He’s known as an offshore angler, and he’s very electronics savvy having logged more than 1,000 hours idling ledges and scanning with Humminbird Side Imaging for what he calls “mega-schools” of bass. Then when he find them, a crankbait is often his weapon of choice to verify that it is in fact a school of bass he’s found and to figure out just how many fish will bite.

He’s very adept at triggering bass with a crankbait, and his methodology is like that of any great athlete. A good wide receiver knows if he jams his defensive back and gets him on his heels before he makes his cut on a route he can get a little separation. Parker has learned little nuances about his crankbait selection and how he fishes them to be able to trigger fish when others might not.

Here are Ben Parker’s four tips to get more bites on a deep diving crankbait offshore.

“I crank with 8-pound P-line monofilament,” Parker said. “I don’t know why they say it’s 8-pound line. Because I know it’s breaking strength is greater than that on a crankbait rod. For me the most important thing with deep diving crankbaits is distance. I can launch a crankbait with lighter line. If you’re only casting a deep diving crankbait 30 feet, you might as well fish something else because you’re not getting the maximum effect from the bait.”

On this afternoon, Parker was getting casts 40 yards or more with a long cranking stick and the light line. This puts the crankbait down in a strike zone a lot longer

“You can catch bass on a crankbait being pulled behind your boat at 3 mph. You can’t wind one that fast so in my experience you can’t reel one in fast enough when they are schooled up and feeding.”

Parker fished a Lew’s Tournament Pro reel with the 5.4:1 gear ratio and burned the reel handle as he worked a Bomber Fat Free Shad over a long bar on Kentucky Lake. Bass after bass bit, cast after cast. The bait is flying into the strike zone and the bass has only a fraction of a second to react to it and hits the bait out of impulse.

Part of the effectiveness of cranking fast comes from the element of surprise. The bass doesn’t know the crankbait is coming until it’s within its circle of influence and it only has a fraction of a second to react to it before it’s gone. That fast fleeing action is the trigger. But it won’t work all the time with baits that make a lot of noise.

“I think people overlook the silent baits,” Parker said. “If you’re up there in the boat parking lot and I’m on the other end and I want to come surprise you real quick, I run towards you as quietly as I can and try to scare you. But if I come running across the parking lot with a tamborine in my hand, you’re going to turn and see me and be ready for me. The same thing with rattling crankbaits. The more noise they make, the more the bass turns and sees them and has time to think about it. Now in stained and dirty water it’s what you need.

“I have seen where the color really matters as much as the sound,” Parker said. “On the lower ends of the fishery where the water is a lot clearer, it’s important to use more natural colors. I love the Citrus shad color, but on the lower end of Kentucky Lake, it’s not as effective as other more natural shad colors.”

The clearer the water, the more the bait should flash like a real baitfish. 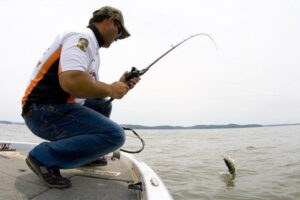