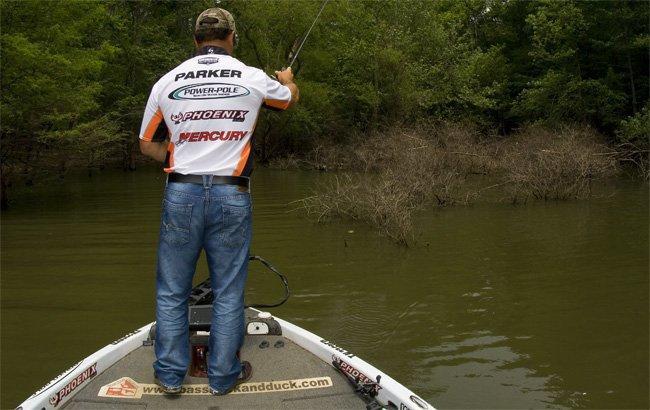 You ever had your confidence in something shaken because you lost touch with whether or not you were even doing it right anymore? When learning new techniques in fishing, it can be frustrating wondering whether you’re even doing it right or not. The key is to keep changing and covering the bases until you get that first bite and then duplicating what you did to get that bite over and over again. Ultimately that’s how simple fishing can be.

However, try to go to new fisheries, in states you’ve never been to, then put some of the best anglers in tournament bass fishing on the lake with you and see if you can figure it out. That’s what’s asked of Bassmaster Elite Series and FLW Tour rookies every year.

Hey rookie go to new water, learn the water and, oh by the way, you won’t be able to get on a lot of the good stuff because the best anglers in the country are also trying to figure it out. Oh and you have two and a half days to do it.

Ben Parker from Springville, Tenn., is an Elite Series Rookie, in the true sense of the word. He fished one year as an Open pro, fishing the Northern Opens in 2010. But there are a lot of pro anglers in this season’s Elite Series supposedly “Rookie Class.”   Guys like Ott Defoe, Andy Montgomery, Keith Combs and David Walker have had a lot of success fishing the FLW Tour for years, and not only are they not rookies, they have won tournaments and are competitive in the Angler of the Year races. For that reason, Parker hasn’t paid much attention to the “rookie class” hype.

“These guys are all accomplished anglers,” Parker said. “They’ve been competing at the top level against good anglers on various fisheries for years. I’m just getting started, taking my local success and trying to get to that next level. So I don’t pay attention to the rookie race because most of the guys in this class aren’t rookies. It’s still just me against the fish, and I’m just focusing on my game and learning all these new fisheries.”

So how has Parker faired? He’s had checks in two of six events. But he barely missed checks in two other events. Ironically enough his best finish was on the Harris Chain where he finished 27th, his first time on the fishery and in the state. But he’s taken a tough lesson this season on how to fish at the top level and adjusting from an unlimited practice time to a 2 1/2-day practice time. Parker’s work ethic has always told him to put in the most practice possible, and now he has to break down new fisheries at much more rapid pace.

“I’ve fished wrong all season,” Parker said. “There are a lot of things I’ve learned, but I’ve gone about practicing on these lakes all wrong. I’ve been fishing too anxious, and I’ve been practicing scared that I was going to miss the deal, miss one of the patterns on the lake I needed to find. So I spend my whole practice trying to find 10 different things that are working instead of just finding one thing and multiplying it all over the lake.”

It’s not really indecisive to try to find all the things that might be working on a fishery in practice and then picking the strongest one for the tournament. But with less than three days on a lake, it’s hard to find everything and have that luxury. Unfortunately that approach really cost Parker at Murray and Pickwick.

“Instead of focusing on one deal and running that, I was all over the lake doing different things. If I had just hunkered down in one of my areas and caught just a few more bass instead of running around trying different things, I could have earned a check. It’s taken me six punches right on the chin to show me the error of my ways.”

Some guys would fold up and give up, but Parker has a renewed sense of belonging now that he’s learning how to manage learning the lakes. And he’s not looking to just do well and be an also ran, Parker is “¦ well “¦ we’ll say a little more than upset with himself that he hasn’t won an event.

“I’m extremely pumped up for the last two events,” he said. “I’ve made some checks and learned a lot, but I’m still pissed I haven’t won one yet. I feel like I’ve spent all my time trying to be too versatile and make sure I don’t miss something that I haven’t just exploited what I do find fully enough to do well consistently.”

Just a few last things as Parker learned some valuable lessons this year that he shared with us.