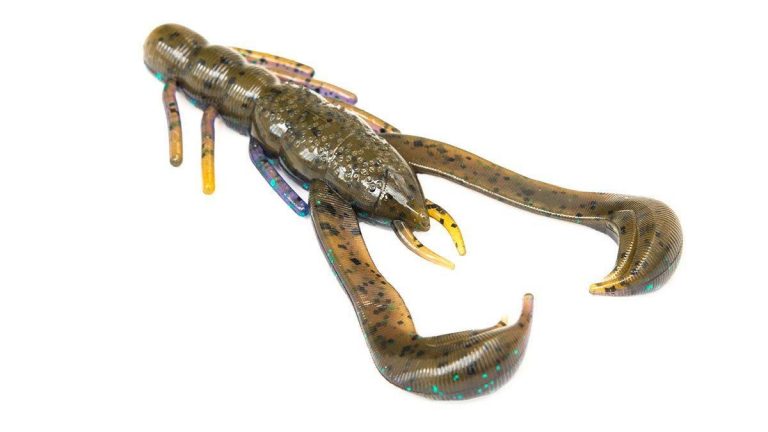 I’ll admit that soft plastic bass fishing lures aren’t always exciting to discuss. Many of us have a few favorites we use most often and other than that, we rarely deviate from our staples. With that being said, however, I’m genuinely excited about this particular bait.

I’ve spent the last week testing the V&M Wild Thang Craw and I have quickly fallen in love with it. After using it extensively on both large and small bodies of water, I couldn’t help but tell our readers about my experience. It looks fairly similar to other traditional craw-shaped soft plastics, but its performance and versatility is strikingly unique.

Here’s why I think this is a solid addition to your collection.

It’s much more than a flipping and pitching bait

When I first headed to the lake to begin testing the V&M Wild Thang Craw, I was expecting to do a lot of pitching and flipping around shallow cover. It had some nice looking pincers and a realistic body shape, but I soon discovered that it was much, much more.

Let’s start with the obvious first before I get into the more non-traditional applications I discovered.

As a pitching and flipping bait, it’s quite impressive in my opinion. It’s a very dense bait with a considerable amount of weight to it. While everyone has different preferences, I really like the added weight. With a small 1/4-ounce tungsten bullet weight, I’m able to pitch and flip the Wild Thang Craw a ridiculous distance without making constant adjustments to my casting reels, which is certainly an added bonus. This also makes it very easy to skip underneath docks and overhanging trees. Although it’s fairly heavy, this bait actually sinks surprisingly slow while its bulbous pincers kick flutter violently. I’ve found this to be very effective when targeting lethargic, post-frontal bass. It doesn’t spiral on the fall, either, which allows it to accurately fall through very small openings in thick laydowns and bushes. As a pitching and flipping bait, it’s proven to be an excellent choice. 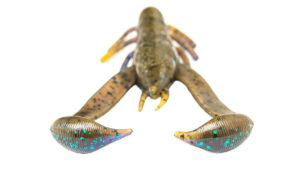 Now for the not-so-normal application that I discovered by complete accident.

I had about 45 minutes after work to head to my pond to do a little fun fishing one evening. I’d been catching the heck out of ‘em with this particular bait, so I kept it simple—one rod and one pack of V&M Wild Thang Craws. I figured that was all I’d need to catch a few fish.

When I got to the pond, the bass wouldn’t touch any slow-moving baits. They were in the shallow grass chasing bluegill and to be honest, I was kicking myself for not bringing my frogs and swim jigs. Out of desperation, I made a long cast parallel to a grass line and tried swimming the Wild Thang Craw subsurface. Much to my surprise, however, it came to the surface after a few turns of my reel handle and started buzzing across the top of the water just like a soft plastic toad—except much louder. Its big, rounded pincers gurgled and spit water while its thick body rocked side-to-side much like a small swimbait. The results were simply spectacular. I caught roughly 10 bass in 20 minutes utilizing this retrieve and the blowups were nothing short of exciting. Keep in mind, I had this bait Texas-rigged with a 3/16-ounce weight at the time. 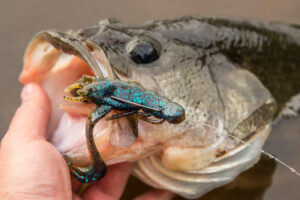 Since that special evening, I’ve been able to take this bait to large bodies of water and cover water with excellent efficiency. I keep the trolling motor on high and pitch to specific pieces of shallow wood while “buzzing” the Wild Thang Craw between targets. So with just one rod and without any re-rigging whatsoever, I’m able to target both lethargic bottom-dwelling fish and active surface-feeding fish with incredible ease.

To say I’ve had fun with this bait would be a gross understatement.

Stays on the hook without any problems

Nobody likes to readjust their soft plastic baits after every other cast. So when I test these types of baits, I make a concerted effort to find out how well they stay in place on the hook. The V&M Wild Thang Craw has passed with flying colors.

The plastic is much firmer than many similar craw-imitation baits. It takes a little extra work to rig on your hook, but you’ll get used to it quickly. Whether I’m skipping this bait underneath docks or buzzing it along the surface, it stays on the hook without any sliding to speak of. The hook point also stays skin-hooked without issue to allow for very few hang-ups throughout an afternoon of fishing. 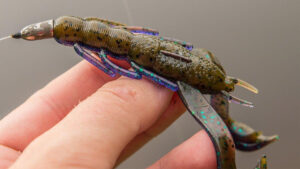 I’ve also been impressed by how well the Wild Thang Craw stays rigged after multiple fish catches. The topwater bites I’ve had have been explosive, to say the least, and only on a few occasions has the bait slid up the line and required re-rigging.

Durability-wise, I’ve averaged roughly 4 fish catches per bait. The first thing to “go” is usually one of the arms due to the heavier pincers and relatively thin plastic that connects them to the body, but I think it’s a necessary evil in order to achieve such an erratic, aggressive action.

When they eat it, they don’t let it go

I’ve always been—and still am, to some degree—undecided when it comes to the effectiveness of pork fat cooked into soft plastic baits. I’m sure it doesn’t hurt anything, but I’ve never had enough concrete information to decipher whether or not it makes bass hold on longer.

The package of the V&M Wild Thang Craw prominently states that pork fat is cooked into the baits. I can’t smell a difference, see a difference with my naked eye or taste a difference—yes, I tasted it in the name of redneck science. But I will say, however, that each fish I’ve caught with this bait has absolutely choked it. Even though they’re lethargic in the 92-degree water, they’ll swim with it as long as they can until I set the hook.

Is it the pork fat? I have no idea. It could be the awesome action of the pincers, the realistic body shape or the firmer plastic that helps them hang on. But the only thing I can say with absolute certainty is that there’s something the bass absolutely love about this particular bait. 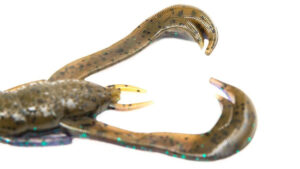 Rarely do I run across a soft plastic craw bait that has the versatility, durability and effectiveness of the V&M Wild Thang Craw. When I’m done posting this review, I’m going to put in an order for more in the Bama Bug, Black Blue, Delta Melon, Watermelon Candy and White Pearl colors. And I can guarantee that my time will be equally spent between pitching and buzzing this bait across the surface. So that should tell you what I think of it.

The V&M Wild Thang Craw is available at TackleWarehouse.com.