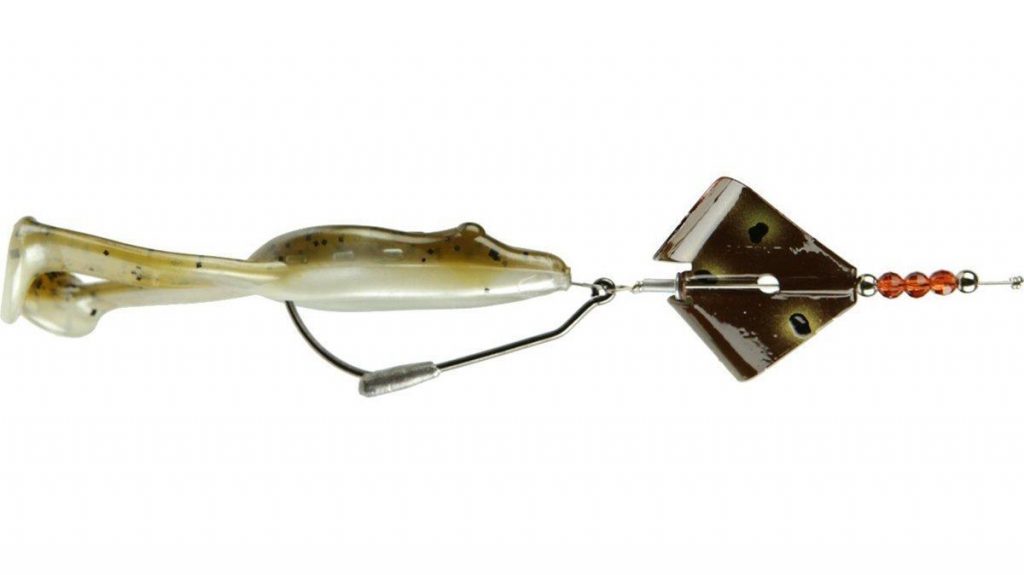 Buzzbaits are widely regarded as one of the most effective lures for catching big bass. Soft-plastic toads are also well known for drawing trophy bass out of thick cover. One would think that combining these two baits would create a perfect storm for excellent topwater action.

The V&M Buzz Frog does just that. With the action of a buzzbait and the profile of a toad, this lure has really impressed me throughout my testing. I’ve spent a lot of time using it on both large and small fisheries and have found it to be an outstanding way to get big bites when the fishing is tough.

Lots of action at every speed

I really like slow-rolling my buzzbaits. I’ve had a few memorable days utilizing a fast retrieve, but the majority of my success has occured when I’ve barely crawled the lure on the water’s surface. Not quite knowing what to expect with this lure, that’s how I began my testing—just creeping it along in any shade I could possibly find. 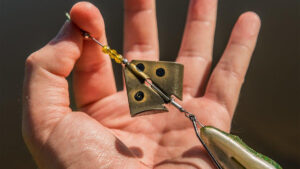 I’ve found the V&M Buzz Frog to have an incredible amount of action when fished slowly. The painted blade creates an average amount of commotion when compared to most buzzbaits, but the added disturbance from the Bayou Bullfrog puts it over the top. Even at slower speeds, the legs kick like crazy and leave a noticeable bubble trail on the surface. 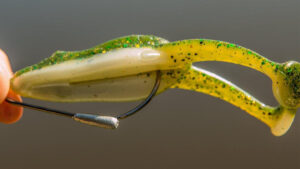 When burned—or fished quickly—a lot of soft-plastic toads will spin and swim upside-down which can not only hinder the action of the bait, but also totally ruin your hookup ratio. The Buzz Frog’s belly-weighted 5/0 hook keeps the Bayou Bullfrog upright, even at unusually high speeds. I tried to make it flip over with a high-speed reel but it tracked true and sat correctly no matter what I did.

When you first start using the Buzz Frog, you’ll probably be a little confused in regards to the hookset. Do you wait a few seconds? Do you swing upwards? Do you just keep reeling? I really had no idea either, so it took me a few fish misses to get it down. 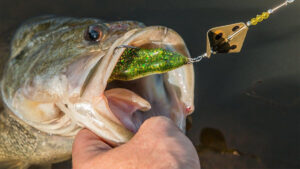 Whenever you get a bite, simply keep reeling until the rod loads and sweep hard at a 45-degree angle; much like a traditional buzzbait. If you can avoid setting the hook like you would with a traditional frog, you won’t have any problems landing your bites.

All of the fish I’ve caught on the Buzz Frog have absolutely inhaled it. I catch a lot of bass with trailer hooks on traditional buzzbaits, but there’s something about that toad on the back of the Buzz Frog that seems to irritate the bass. I’ve had a few slurp it down without much fanfare, but most of the bites have been incredibly vicious.

Durable and easy to customize

I’ve tinkered with some similar buzzbait/frog combinations in the past and their lack of customization and durability has always been my biggest complaint. Fortunately, this particular model seems to address both of those concerns. 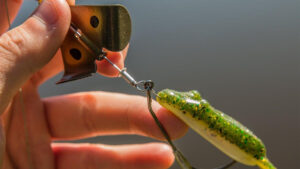 While there are 8 great-looking combinations from which to choose, you can create your own Buzz Frog combinations if you’d like. A 5-pack of Bayou Bullfrogs is only $3.99, so you can constantly experiment and tinker with different toad and blade color combinations. This can be a major plus if you fish in especially clear water.

The durability of the Buzz Frog is above average, especially on the back-end. The Bayou Bullfrog is made from a soft, yet very hearty soft plastic and lasts for many, many fish catches. The plastic collapses well when a fish bites and exposes the hook point to further facilitate a solid hookup ratio. 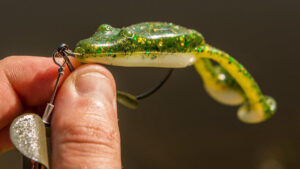 The Buzz Frog’s wire is a bit thin for my liking, but it does allow for a little extra action throughout the retrieve. I will say, however, that the wire doesn’t crimp like many buzzbaits; if it does get a bit warped, you can usually bend it back without any permanent damage to the lure.

This is a really cool topwater lure that will catch a lot of fish for anglers. If you fish around a lot of grass lines, shallow wood or docks, it’s certainly worth checking out. It’ll take a little getting used to, but after a few big blowups, you’ll become a believer.

The V&M Buzz Frog is available at TackleWarehouse.com.