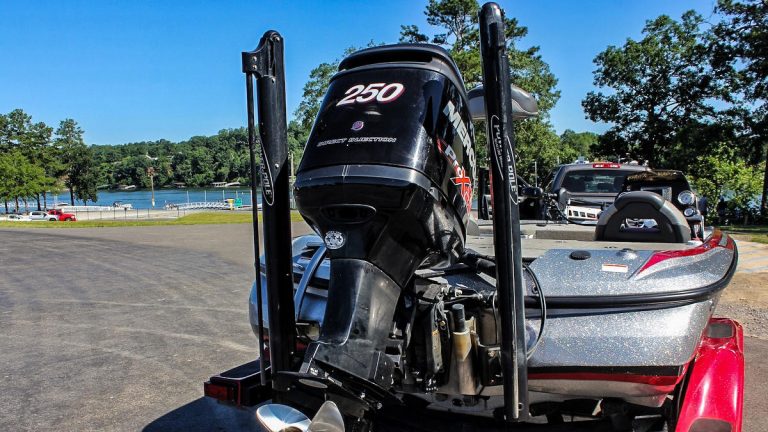 A little while back, I bought a 2010 Nitro Z8. I’ve been in and out of about every boat brand by now. Some new, some older. Some I paid top dollar for, some I got a bargain on and and some that I was lucky enough just to use for a while because of the job I had. But I’m always looking for a deal. At the time when I stumbled across this Nitro, I was looking for a full-size front deck with a 250 on the back. The boat was a little beat up, but it had a couple nice upgrades with a Minn Kota 112 Ultrex trolling motor and a hydraulic jackplate. Two key features I was looking for but are rarely found on an older boat. The price was right, so I jumped on it.

It came with electronics, so I was set on graphs and the only real pressing upgrade I was interested in were Power-Poles. Every boat I’ve owned for any extended period of time over the last decade has had Power-Poles and, provided I can afford them when the time comes, any boat I’ll have in the future will have them too. I use them all the time with the way I fish and I truly believe they are some of the most vital tools on a boat. But I couldn’t justify dropping $4,000 plus on Power-Pole Blades and brackets to go on a 9 year old boat. So I took a long, hard look at the Power-Pole Sportsman Series and this is what I found. 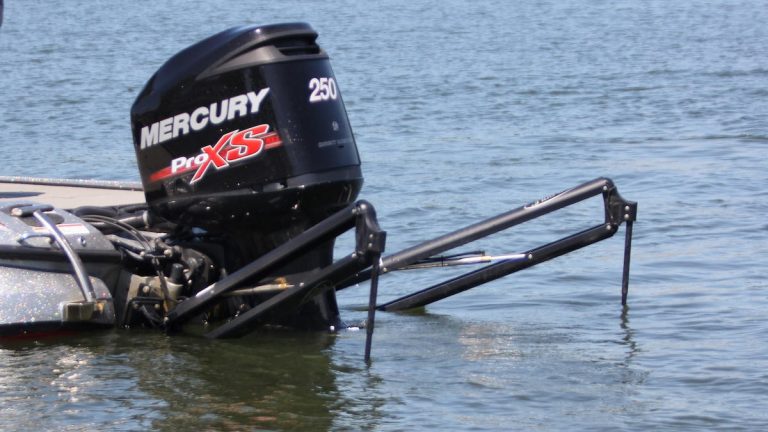 Obviously and as previously stated, the price point is the first thing that drew my attention to the Power-Pole Sportsman Series. I would need the same adaptor plates to mount either the Blades or the Sportsman Series to my boat, so the only money difference came in the price of the Poles themselves. At $1,299, the 8-foot Sportsman Series came in $600 less than the 8-foot Blade. So for the pair, I was looking at $1,200 in savings.

Now if I were buying a brand new boat, I would go with the Blades. That $1,200 price difference is less significant in that situation as the resale value would be far greater with the Blades than the Sportsman Series. If I put Sportsman Series Power-Poles on a 2020 boat for instance and tried to sell it in 2022, every other comparable boat out there would have the Blades on it and I would have to cut the price of my boat more than $1,200 to be able to compete in the market.

But for an older boat, having shallow-water anchors of any kind would be a huge selling point compared to the other boats on the market at its level. It wouldn’t matter as much to the buyer that they were Blades or Sportsman Series. But, it would be much easier for the added value of the Poles to boost the value of the boat a couple thousand dollars versus four thousand. So, I felt the Sportsman Series were 100% the right call financially for what I was trying to do. Now what about functionally?

I called around to a few buddies who I knew had run the Sportsman Series to see if they were “good enough” for me to rely on and put through the wringer. What I found impressed me quite a bit. Like the Blades, the Sportsman Series offers a wireless connection between the key fob, dash switch and foot switches and the Poles themselves.

The same hydraulic pump unit and heavy duty hydraulic hoses are used for the Blades, Sportsman Series and the midrange Pro Series Power-Poles. And all three come with the same spring-loaded valve Power-Pole incorporated to create their Drive-Off Protection feature which prevents the Poles from being damaged in the event you try to take off with them still deployed.

So I bought a pair and put them on the Nitro. Coming from a guy who has used Power-Poles for years, these are bad to the bone. They do what I need them to do. They drop quickly and quietly and hold me securely in shallow water. They are just as reliable as the Blades I’ve owned in the past.

By and large, these are definite a buy in my opinion. If you’re running an older boat and looking to add another weapon to your arsenal, the Sportsman Series are the deal. I compare them often to the Lowrance Elite units. I ran a couple of those a few years ago and was very impressed by them. They have at least 80% of the capabilities Lowrance’s HDS units have and they come in at half the price. I know some really good anglers, but I only know a couple dozen people who could get the good of that other 20% the HDS units offer anyway.

I believe Power-Pole, Lowrance and a few other companies for that matter have identified a consumer base that wants more, but is also either financially savvy or just can’t afford their top-of-the-line models. In response, these companies have created extremely good alternatives at a much more conservative price point. And I applaud them all for that.

What can the Blades do that the Sportsman Series can’t? For starters, the Sportsman Series maxes out at 8 feet, where the Blades offer 8- and 10-foot versions. That’s a big deal for some anglers who fish a very particular depth a lot, but even when running the Blades I’ve always used the shorter version. I fish in less than 8 feet of water well over half the time and the 8-footers also work extremely well for the other common uses like docking or beaching the boat to load and unload.

The Blades do have slightly beefier components. And for that reason, Power-Pole is able to dial up the pressure on the pumps that go out with the Blades before they leave the facility. But outside of that, the differences between the Sportsman Series and the Blades are primarily aesthetic. The Blades have a pocketed spike and a narrower, more aerodynamic design, so they just look better to some folks. And you’re able to choose from 4 different color options to match your Blades to your particular rig.

The Power-Pole Sportsman Series CM2 is available at TackleWarehouse.com.