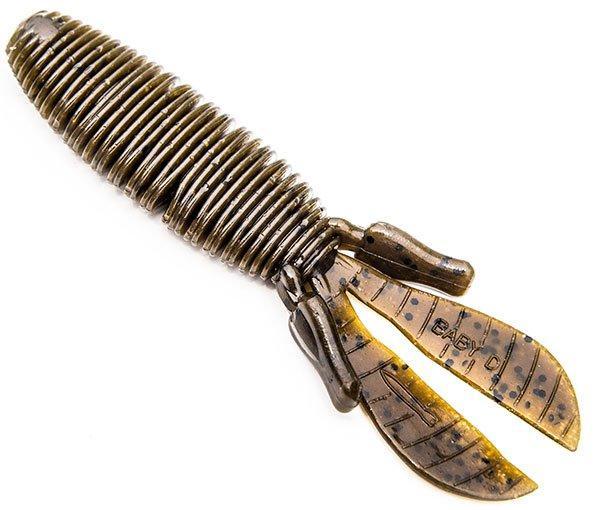 Flipping and pitching soft plastic baits is a great way to catch big bass throughout most of the year. However, there are instances in which the bite gets tough. I’ve been battling some pretty poor fishing conditions on my home lake lately, but the Missile Baits Baby D Bomb has really bailed me out of some tough fishing days.

Whether I’ve flipped it, pitched it or casted it, the Baby D Bomb has continuously impressed me and caught a lot of bass for me.

I have been flipping the original D Bomb for a long time with a lot of success, so I was excited to try then new Baby D Bomb. Fortunately, it has all of the awesome characteristics of the original, but in a more compact package. 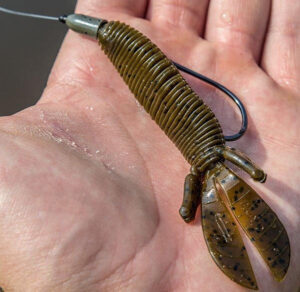 Measuring just 3.65 inches long, the Baby D Bomb has proved hugely effective for me when fishing during post-frontal conditions. In these conditions, bass won’t always jump at the opportunity to eat a large bait, making downsizing a necessity. There have been several times lately I’ve flipped a jig into a laydown with no luck, but an ensuing cast with the Baby D Bomb has caught a quality bass.

When you flip or pitch the Baby D Bomb into cover, it falls straight through without spiraling or getting snagged on limbs or vegetation. Once it hits the bottom, it doesn’t flail around wildly. Instead, the claws simply wave with the movement of the water, which drive big, wary bass crazy.

The Baby D Bomb is an extremely soft, soft plastic. When you thread it on to a hook or even a shaky head, it doesn’t rip or tear due to its oily composition. Although it’s soft, it stays on the shank of the hook very well and holds up well to skipping underneath docks and overhangs.

The oily feel of the Baby D Bomb has been especially helpful for me when fishing very heavy cover. Many other soft plastic baits will get caught on random limbs or weeds, but this bait just slides right throughout without any problem whatsoever. This has made it very easy for me to cover water quickly and efficiently when developing a solid pattern.

If you’ve experimented with really soft baits in the past, you’ve probably had to deal with a bunch of tears, rips and missing appendages. Thankfully, the Baby D Bomb holds up very well to the abuse of fishing both shallow and deep cover. 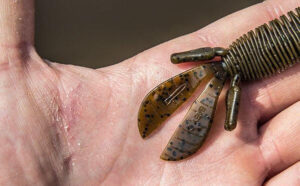 I’ve been flipping and casting the Baby D Bomb to a few remaining bream beds and even when bream “jackhammer” the bait when it hits the bottom, the bait stays totally intact. Not only does this save time by avoiding constant re-rigging, but it will also save a lot of money in the long run.

Don’t be surprised if you catch several bass on a single Baby D Bomb, either. I was using it last weekend and my fishing buddy was amazed at how well it held up. Even after 4 solid bass and multiple swing-and-misses, it was still in its entirety and totally fishable.

I’ve been very impressed by how versatile the Baby D Bomb is. Although I’ve primarily been flipping it as of late, I’ve also caught some good ones out of deep water with it. I’ve been rigging it on a 1/4-ounce Missile Baits Warlock Head and casting to deep, rocky points and brush piles with a lot of success. When rigged on the Warlock Head, it looks just like a crawfish in a defensive posture, but it’s dainty enough to be effective in gin-clear water as well.

When fishing the Baby D Bomb on the Warlock Head, I haven’t really had to do much in order to draw strikes. I’ve been dragging it slowly until I hit a piece of cover and then I’ll barely shake my rod tip.

If you’re looking to give the bass a different look, I definitely recommend checking out the Missile Baits Baby D Bomb. Whether you’re a power or finesse angler, you’ll be able to find plenty applications for it.

The Missile Baits Baby D Bomb is available at TackleWarehouse.com. 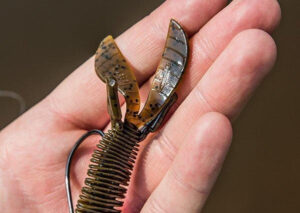