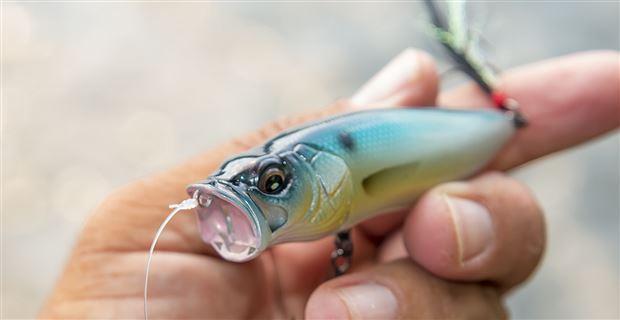 We all have our favorites when it comes to fishing techniques and fishing lures. I love swimbaits, pitching shallow wood and topwaters as my three favorite lure/technique combinations. I have a special affinity for throwing small topwaters like the one I’ve been throwing a lot the last 6 months, the Megabass PopMax.

I think a popper is a tremendous fish catcher. But it’s a dynamite bass catcher and maybe even better at catching those other bass â€” like smallmouths and spotted bass. I will admit I have a box full of topwater poppers. And I’m pretty slow to add topwaters to my boxes. Granted I’m always trying new lures, but I know what to expect with certain ones so I just keep sticking with them.

I added the Megabass PopMax this year for a number of reasons. Let’s talk specifics on the bait first. If you haven’t already, check out some of the PopMax strikes in this video: 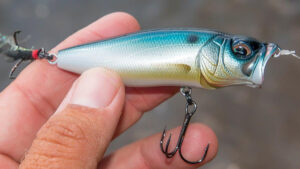 Specifics on the PopMax design

At first glance the PopMax probably looks like a lot of poppers on the market, albeit with a little more intricate detailing around the face and better paint jobs.

I think most people don’t understand that a lot of design goes into Megabass’s creations because they are trying to make baits that are literally fun to fish all day. Different, unique, better â€” sure. But fun is the most important quality to build into a lure. It’s what makes me such a freak about swimbaits. They are just fun to throw. It’s what makes me love topwaters. They are just fun to fish.

So I really didn’t understand what I was getting when I first got the PopMax. It was obvious water was going to go through the open chambers in the mouth. But I didn’t understand the purpose until I fished with it a few days. 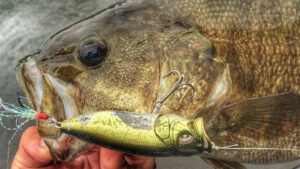 This isn’t the first topwater they’ve made with water chambers in them. It’s not just a ploy. It actually serves a couple of purposes that anglers should note.

The PopMax has 6 water intakes in the mouth and four outflows on the bait. Water goes in through the mouth, and goes out the gills on both sides but it also funnels into a chamber that expels water beneath the gills on the bottom of the bait. That is a key to this bait’s performance. That bottom outflow causes a bubbling action under the surface and it keeps the popper from skipping on the surface as you work it in a cadence.

The bait is 1/2 ounce but fishes more like a 3/4-ounce popper. To me that’s a big deal too. Guys think you want a smaller bait when you’re trying to quietly present a lure around shallow targets. I think the opposite is true. I can flip with a 3/8-ounce jig just fine, but I can pitch a 1/2-ounce jig with pinpoint accuracy and no splash because the weight of the lure gives you better line pull and control. The same is true with roll casting poppers; more weight allows for better target casting. 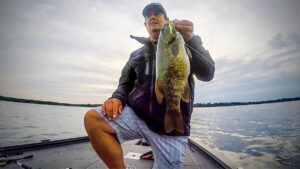 I have fished the PopMax all over the place now. I’ve caught bass in Arkansas, Minnesota, Missouri and Kentucky on it in a wide variety of fishing conditions from muddy waters, shallow water and even out over clear 100-foot deep water. But day in and day out, I really like it for fishing shallow areas. While I typically like a walking topwater for covering big areas like flats, weedlines, etc.

I’ve found the PopMax to be a really interesting alternative because of its ability to walk like a dog-walking type bait, its ability to chug along in cadence like a fleeing baitfish and its ability to chug and spit and stay in one place around isolated targets. It’s the best of all worlds, especially when the fish are key on bait that isn’t as big a lot of those walking baits.

I really had a lot of fun on a recent trip to Minnesota fishing both lakes and small rivers for smallmouths with the PopMax. We threw a host of topwater baits in that few day trip and the PopMax was the top performer by far among 6 anglers on the trip. We were fortunate to get a lot of the fish catching fun on film too. But the PopMax’s versatility was the big key. 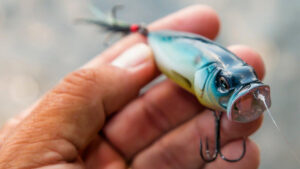 That ability to cast it into a tight little spot around cover. Chug it hard and let it sit. Chug it again and let it sit. That worked at times. Then the quick, tight walk-the-dog cadence worked well other times.

But probably the most productive cadence for those smallies was just chugging the PopMax hard and steady with short low chops with the rod tip and reel simultaneously. You can snap that rod tip just a few inches and get a good water push and flow. That aggressive approach pulled fish shallow on a small river. It pulled them shallow around lake grass. And it pulled them out in the middle of the lake and high spots during the low light hours in the morning.

I love the GG. Bass, Gill, GP Crystal Shad and believe it or not that Secret V-Ore (UV) color is pretty terrific on smallmouths and spots.

You can find the PopMax on TackleWarehouse.com and other retailers that carry Megabass fishing lures. 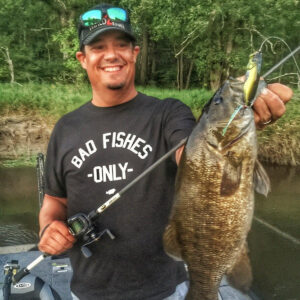 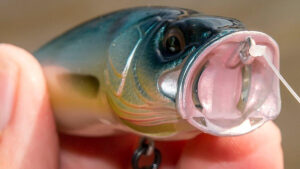 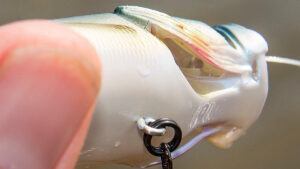 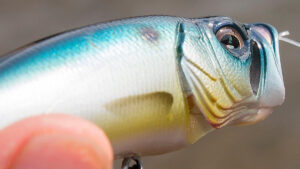 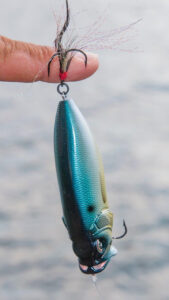 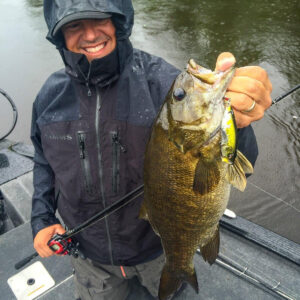