It can be difficult finding a big worm hook that fits your needs. When you find one with a gap wide enough for bigger, beefier worms, a long cast often sends the head of the worm sliding down the shank. Itâ€™s not only irritating, but it also really hurts your hookup ratio.

For the past few years, however, Iâ€™ve been using the Lazer Trokar MagWorm B.A.R.B. EWG Hooks for my larger worms. Iâ€™ve spent extensive time fishing with them in large reservoirs, small ponds and even south of the border on Lake El Salto. Theyâ€™ve proven to be a reliable and very effective hook.

No slipping or sliding

Iâ€™ve had a booger of a time keeping my big worms in place in the past. I have a lot of success aggressively hopping big worms around offshore structure on my home fisheries, but there was one glaring problem I constantly battled; with every pop of my rod tip, my big worms were sliding down the hook shank.

When fishing with the Lazer Trokar MagWorm B.A.R.B. EWG Hooks, Iâ€™ve been quite impressed by how well the worm stays on the hook. We were fishing in some of the thickest cover Iâ€™ve ever seen on El Salto and I can confidently say that my 10 and 12-inch Berkley Power Worms never slid down the shankâ€”not even once.

When Iâ€™ve run across schools of 2-pounders, even after getting bites on 10 casts in a row, the worm stays put. This ensures that your worm maintains a streamlined, natural profile, but more importantly it extends the life of your worms.

Lazer Trokar refers to this feature as the Trokar B.A.R.B. and itâ€™s made from a hard-shelled copolymer. Iâ€™ve lost track of all the bass Iâ€™ve caught on this hook, but the keeper stays intact excellently with no issues. 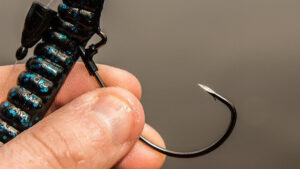 I get a lot of questions from people regarding poor hookup ratios on long range hooksets with a big worm. Itâ€™s always been a tough question to answer because itâ€™s a double-edged sword of sorts; you could use a lighter wire hook, but that increases the odds of flexing and bending throughout the fight.

Perhaps my favorite characteristic about this hook is the excellent penetration it offers when bass bite on the end of a long cast. The Lazer Trokar MagWorm B.A.R.B. EWG Hook is stupid-sharp because it has surgically sharpened three-sided hook points, which means you donâ€™t have to bruise your ribcage every time you set the hook.

Iâ€™ve actually caught a lot of fish with this hook by winding into them and sweeping to the side, similar to a Carolina rig hookset. Since using this hook, I can confidently say Iâ€™ve enjoyed a dramatic increase in my hookup ratio, regardless of the length or thickness of the worm Iâ€™m using.

One hook will last a long time

Iâ€™m a big fan of fishing deep rock and brush piles. Although itâ€™s an excellent way to catch some of the big bass many anglers overlook, this type of fishing requires careful hook care. After a few hours of grinding your Texas rig around all of that gnarly cover, you better take a close look at your hook point because itâ€™s a surefire way to get your heart broken.

These hooks, however, seem to maintain their sharpness for a very long period of time. Iâ€™ve had 20 and 25-fish days and without replacing a hook.

There was a day during my El Salto trip when many anglers were complaining of terrible hookup ratios. Fletcher Shryock and I fished in the same boat with the Lazer Trokar MagWorm B.A.R.B. EWG Hook and didnâ€™t have a problem getting â€˜em in the boat. Again, I believe thatâ€™s a major testament to this hookâ€™s design and sharpness. 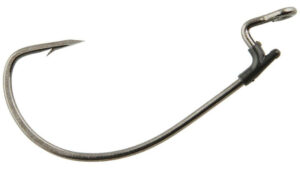 They donâ€™t bend or flex

The Lazer Trokar MagWorm B.A.R.B. EWG Hook is constructed with ultra-high carbon steel Q741 wire that stands up to ridiculous abuse. I also use this hook to flip and pitch deep trees and have had several close-quarter encounters with big fish without any flexing or loss of shape.

I actually lost my personal best bassâ€”estimated at 12 to 13 pounds by the guideâ€”with this hook at El Salto, but it wasnâ€™t the hookâ€™s fault. I was a dummy and pulled too hard when she wrapped me up in a deep tree. After pulling and wrenching for several minutes before realizing she had pulled off, I was able to retrieve my Texas rig from the tree. To my surprise, this hook was totally intact and just as sharp as before.

If you like to cast larger, ribbontail worms, I suggest checking out the Lazer Trokar MagWorm B.A.R.B. EWG Hook. Theyâ€™ll hold your worm in place, penetrate the bassâ€™ mouth without any problem and last for a very long time.