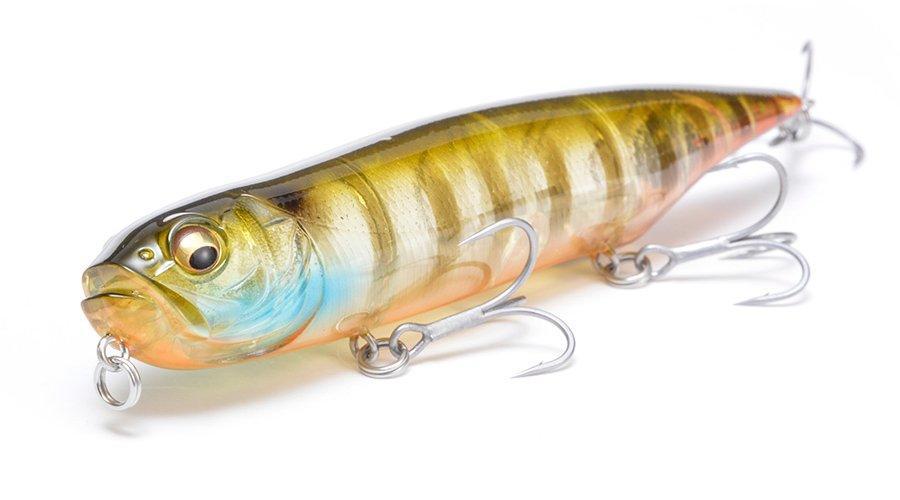 I’m a big fan of making things better. It’s probably why I, and lots of other fishermen, tweak on our baits so much. Shaving, sanding, adding weight, taking off weight, changing hooks, add attractors, using markers and dipping die. It’s all an effort to outsmart a fish that probably isn’t given enough credit for being easily conditioned. I like companies that do that too.

I’ve been playing around the last couple of months with the Megabass Dog-X Diamante walking topwater lure. I knew the first time I picked it up, it was going to be one of those special topwater baits. I have a pretty good nose for that when it comes to fishing tackle.

The Dog-X Diamante was designed by the crafters at Megabass with input from tournament fishing professionals who were trying to address some of the inherent problems with topwaters. There are several common problems you find fishing topwaters, and it doesn’t necessarily mean the other lures are bad as much as it is the nature of that style of fishing.

For one bass trying to hit topwaters do it with a lot of speed and force. Which means they miss a lot and get the bait awkwardly at times. So you need to design the bait so that it hooks up better. That was high on the list for the Diamante.

Also when fishing topwaters, you generally need to make very long casts. Your odds increased dramatically of catching fish on topwaters, especially the clearer the water, if you stay as far away from the fish as possible and don’t put them on guard as much. So the bait needs to be very aerodynamic and weighted properly. Also high on the design list for the Diamante.

And because of often making long casts with walking topwaters specifically, it’s generally more difficult to get the bait to start walking at first, and then you get your slack and rhythm going, and it starts walking easily and naturally. But you might have missed an opportunity to fool a bass at the end of a long cast. Finally, when the water is clear, you want to be able to walk it fast, and if it’s choppy, you want it to still be able to cut and dart while riding up and down on waves.

That’s a pretty tall order for one topwater bait. 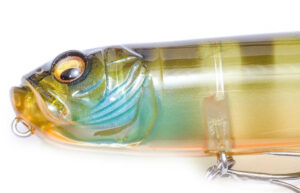 I was happy to find that the Dog-X Diamante delivered on several of the difficult facets of fishing topwater lures efficiently and effectively. I have now caught some pretty hefty bass on the lures and a lot of fish on them and have found several things unique about them in comparison to other topwaters.

The bait throws a country mile. Put it on braid and it will throw even farther. It has a nice rear weight that enables you to throw it like a spear. I could launch the Diamante. But probably more impressive is that it’s weighted to be thrown accurately. You could make a topwater lure really heavy, but it would be unwieldy if you wanted to say throw it down the side of a dock. That was the case with the Diamante. I pitched it in boat slips. Cast it under walkways of docks, fished it around buck brush and cast it across big flats.

I got a good many of my bites working the lure as fast as possible on straight braid. You can tie direct to the bait without a split ring and it’s real responsive to your jerks and pops. It doesn’t move as much side to side like that. Has more of an angled quick dart forward. On a split ring it really “chops” the water and slashes from side to side. That gave the bait a really nice flash and roll that I liked. 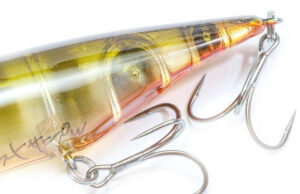 The most impressive part was it didn’t slide on a really fast cadence. A lot of times with schooling or competitive fish, you can work a walking topwater really fast and get them to react better than if you’re just in a slow methodical cadence. Like make it look fleeing. The problem comes if the bait is too buoyant and it stops cutting and starts sliding on the surface. You lose the ability to walk the bait at those high speeds.

The Dog-X Diamante is weighted so that you can get it to cut side to side hard at very rapid speeds and skate on the surface even in windy conditions. The three hooks are sticky sharp No. 5 Gamakatsu SP-MH hooks, and all I had to do was lean into fish with that braid to stick the fish. I have not lost any yet that I hooked on the strike. So far, the Diamante has completely lived up to the hype about it. It’s going to be a real killer from spring until the water gets back in the low 50s in the winter. It will be special much the way their Ito Vision 110 was special for jerkbait fishing.

You can find the Dog-X Diamante online at tacklewarehouse.com and in retailers already that carry Megabass topwater lures. 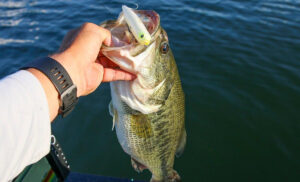 Pro Tip: Add about 12 inches of mono leader to your braid in front of your topwater. It’s a shock leader to hook the bass a little better in my opinion without losing the ability to control it on very long casts with braid. It also allows the bait to dip and dart, and you won’t have issues with it turning so hard and catching.

Braid is light and often floats, so while the bait is turning, the braid goes limp and slides the opposite direction. As the bait cuts back, there is all this loose floating braid in the way, and the next thing you know, the front hook is caught, ending a good cast. So add that mono leader, and see if that makes it even better for you. This is how I fish my walking topwaters all the time now. 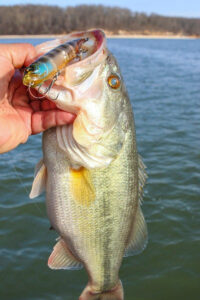