Anytime you can find a casting reel that handles braided line, fluorocarbon and monofilament equally well, you’ve hit the jackpot. I have several reels I use only for specific line types and diameters, but the Lew’s BB-1 Pro Series Speed Spool Casting Reel works with any type of line you can imagine. Whether you’re flipping, pitching, cranking or frogging, this reel is a solid piece of equipment that does the job excellently.

The BB-1 Pro Series Speed Spool Casting Reel has a braid-ready spool with outstanding line capacity. There are a lot of casting reels out there that don’t “like” braided lineâ€”it will slip, spin and dig itself into the spool throughout the day causing a multitude of irritating problems. That’s not the case here.
https://s3media.247sports.com/Uploads/wired2fish/2014/03/lews-bb1-pro-series-speed-spool-casting-reel-line-on-spool.jpg

I’ve tested this reel with each type of line and have enjoyed exceptional results. Regardless of the diameter, braided line operates flawlessly on the spool. It won’t slip, it rests evenly without lumping and doesn’t cut into itself. Fluorocarbon, even the heavier diameters, also works very well. On a long cast, the line won’t jump off the spool and cause backlashes and it stays flat and even for months. Monofilament is great for this reel, too. You can cast it a country mile without any worry of backlashes or line jumping. 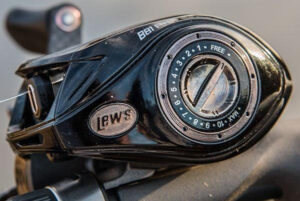 I didn’t think Lew’s could get much better after the release of their original BB-1 Speed Spool, but apparently I was wrong. The casting distance of the BB-1 Pro Series Speed Spool Casting Reel is absolutely ridiculous.

It features a new cast control system that allows for 27 different adjustments. As a result, I’ve been able to cast anything from small balsa crankbaits to 3/4-ounce football jigs with ease. Windy conditions have honestly become a non-factor for me when using this reel, too. All it takes is a few clicks of the brakes on the side plate and you can make bomb casts directly into the wind.

I have a lot of casting reels that require constant babysitting when they come out of the box. After you spool them up, you better spend some time getting them tuned before your tournament. This reel is super easy to tune, regardless of the application for which you plan to use it. It only took me three casts to get it dialed in for my needs.

I’ve also been impressed by how easy the BB-1 Pro Series Speed Spool Casting Reel is to cast. You don’t have to worry about thumbing it throughout the entire cast. With all of its adjustment options, you’re able to quickly find a setting that works best for you without much tinkering.

The BB-1 Pro Series Speed Spool Casting Reel probably has a longer handle than many casting reels you’ve used. It measures 95 millimeters and is made of lightweight Carbon Fiber, resulting in excellent cranking power and reduced overall weight.

I’m definitely a fan of the big paddle handle knobs on this reel. I don’t always get to fish in perfect conditions and these oversized paddles make it much easier to keep a solid grip on my reel in inclement weather conditions. When you get a bite, you won’t need to fumble around trying to find the paddles which is a big positive in my opinion.

We’ve all used reels in the past that sound like they could break apart at any minute. Some squeal on the cast, others rattle throughout the retrieve and some simply feel wimpy. This reel is super tight and doesn’t have any “play” whatsoever.

I have been beating this reel to death. I love to flip and pitch soft plastics into the crud and I’ve caught several bigguns with this reel. Even when I set the hook as hard as I can, the reel remains absolutely silentâ€”no squealing or rattling to speak of. The tension, braking and drag settings stay in place and consistent with zero adjustments needed. 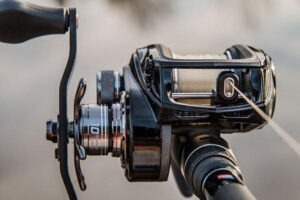 This is a hard thing to explain, to be quite honest, but I’ll give it a try. Throughout my use of this reel, I have never felt anything out of the ordinary. Some of my reels have developed a “grainy” sound that disassembly and oiling won’t even fix.

The BB-1 Pro Series Speed Spool Casting Reel honestly feels plain sexy when you use it. It’s super quiet when you turn the handle, it casts effortlessly and handles big fish with ease. The drag is also one of the smoothest I’ve used.

If you’re thinking about buying a new heavy duty casting reel, I wouldn’t hesitate to recommend the BB-1 Pro Series Speed Spool Casting Reel. It retails at $199.99 and judging by its performance, I feel like it should cost a lot more.