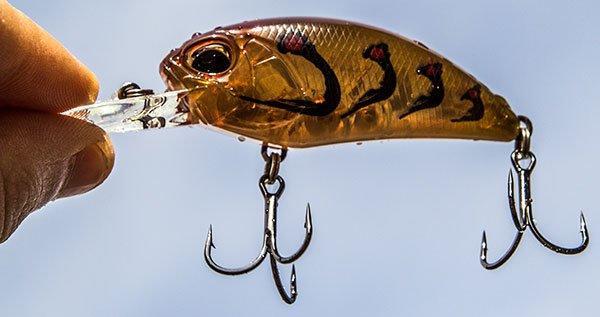 I’ve been using the Duo Realis M65 Crankbait for the past several weeks and I’ve been incredibly impressed by several of its qualities. Based on my recent experience, it has the potential to become a cold water staple in many bass anglers’ arsenals.

The Duo Realis M65 Crankbait probably doesn’t sound like any other crankbait in your tackle box. Its finely tuned metallic rattle system produces a different pitch of rattle than I’ve ever heardâ€”I’d actually describe it as more of a “clack” than rattle.

The rattle system is quite simple, yet very unique for crankbaits. It has a steel ball and an internal metal plate that create an excellent sound each time the lure rolls on its side. This may not sound like very much, but it’s been very effective for me lately in cold, dirty water situations. A lot of other crankbait rattles sound like a “thud”, which is certainly effective at times, but the loud, piercing “clack” of the M65 Crankbait has really outshined other rattle systems for me lately.

I’ve beat the tar out of this crankbait and I haven’t had to do any sort of tuning to it. From the minute I took it out of the package until the minute I’m writing this review, it has run perfectly and flawlessly.

So much of your wintertime cranking success is reliant upon dredging your crankbait’s bill along hard bottom composition areas and the M65 Crankbait makes it easy. It dives down to its proper operating depth very quickly and efficiently and once it reaches the bottom, it grinds across chunk rock, gravel and boulders with no problem at all.
https://s3media.247sports.com/Uploads/wired2fish/2014/02/duo-realis-m65-crankbait-li.jpg 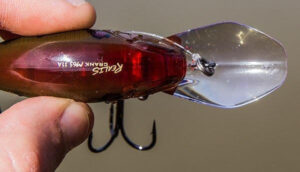 The bill shape is much different than any other crankbait I own and I’m pretty sure it’s the reason the M65 is so awesome for cranking rocks and hard bottom areas. About midway between the tip of the bill and the nose of the bait, you’ll notice an outward angle. As the tip of the bill wedges into small cracks in the rocks, this small angle kicks the M65 to the side and away from any potential hang-ups. I’ve had this bait hung-up about two or three times and all it takes it one try of the “bow and arrow trick” to get it free.

I have a few bass fishing lures that I’m scared to throw because I know my first cast will somehow end up 45 feet high in a pine treeâ€”that’s just how things work. When I first saw the M65 Crankbait in its package, I was pretty amazed by its aesthetics and attention to detail. So amazed, actually, that it took me a while to get the courage to throw it. I didn’t want to risk messing it up, as dumb as that sounds.

I’m happy to report, however, that this crankbait is made excellently. There is absolutely no flex anywhere in the bill, the body and bill are attached solidly, the eyes stay intact throughout thousands of rock collisions and the pain holds up very well to hook rash and teeth marks.

Ready to go straight out of the package

As I discussed earlier, the M65 Crankbait runs true from the minute you first throw it. But it’s also important to consider a lure’s tournament readiness from the package. Failing to do so can result in lost fish, lost fishing time or wasted money.

This lure comes equipped with outstanding heavy wire treble hooks that are remarkably sharpâ€”they hold their own against rocks and gravel and sustain their sharpness for a very long time. The M65’s split rings are also very strong and will not bend, break or gap regardless of the frequency of your hook changes.

If you’re looking for an awesome coldwater and prespawn crankbait, I’d take a close look at the Duo Realis M65 Crankbait. It’s priced at $12.99, so you’re going to pay a little more, but I believe its features totally justify the small price increase.

The Duo Realis M65 Crankbait is available at TackleWarehouse.com.