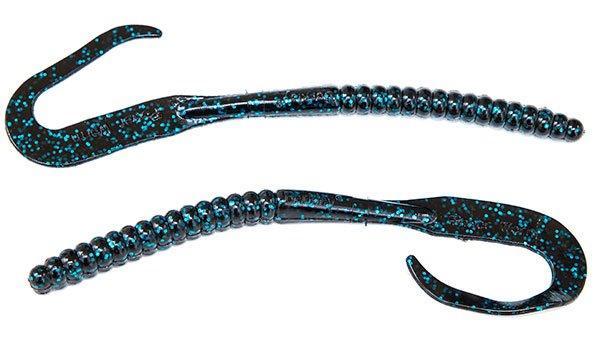 It seems as if big worms have taken a backseat in today’s bass fishing culture. With the introduction of newer and “sexier” creature and craw baits that look more like spaceships than bass forage, many of us tend to overlook the sheer effectiveness of the big worm.

I’ve been using the Berkley 10-inch Power Worm a lot this year both at home and abroad. I’ve caught bass with it on big fisheries, little ponds and even one of the most famed bass fisheries on the planet in Lake El Salto. After putting it through the wringer and having constant success with it, it’s quickly becoming a staple in my bass fishing arsenal. 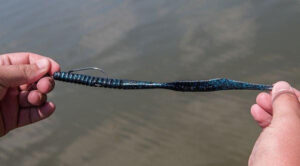 How frustrating is it to be on a massive school of fish and have to re-rig your rig after every bite? Whenever you’re fishing offshore structure, timing can be absolutely critical. When you get that school fired up, you better be prepared to take advantage of it.

I’ve been extremely impressed by the durability of the Berkley 10-inch Power Worm. It hasn’t seemed to matter if I’m getting short strikes, catching a bunch of bass or getting “pecked” by bluegill or tilapia—I have fished several full days while using just a few worms.

During my recent trip to Lake El Salto, we found a single submerged tree on the end of a point that was absolutely loaded with bass. I was fishing with Elite Series pro Fletcher Shryock and we got bit on every single cast for about an hour. I’d never seen anything like it and the Power Worm’s durability was simply amazing. 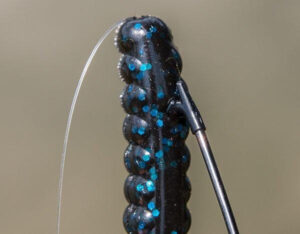 I’d guess that I got roughly 50 to 60 bites in that tree and I used two—yes, two—Power Worms. The head of the worm held together excellently with very minimal tearing and to my surprise, the tail held up very well. I think a few of the bites were from Tilapia, but not once did they rip the tail off. Impressed is an understatement.

I have done a lot of experimenting with the Power Worm in shallow, clear water and it has excellent action on the fall and when twitched. The fact that I’ve gotten several key bites before it has even touched the bottom is a testament to that.

The ribbon-tail of the Power Worm is a lot more rigid than many big worms and as a result, it displaces a lot more water with even the slightest twitch of the rod tip. The bend of the tail also seems to be much more pronounced, which increases the intensity of the pressure waves it emits. I recently got on a green pumpkin Power Worm bite in dirty water—weird, I know—and it seems as though the aggressive tail action played a very integral role in it.

While fishing on Lake El Salto last week, Hunter and Fletcher Shryock got on a random “swimming worm” bite in the standing timber. The bass weren’t responding to the traditional Texas rig presentation, so the brothers would simply cast the Power Worm, let it sink to the bottom and quickly speed it back to the boat, almost like a crankbait.

Their best five bass that afternoon ended up weighing over 32 pounds and I gave them all kinds of grief about it. After laughing about it the entire evening, I ended up trying the same thing the next morning and sure enough—it worked. When reeled, the action of the Power Worm’s tail puts off a ton of vibration and pulled the fish right out of the trees. I tried this same technique with other big worms and I didn’t get a single bite.

The stink is a good thing 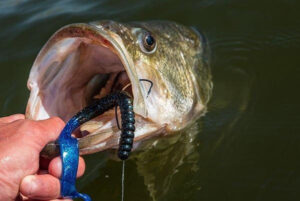 If you’re familiar with Berkley Powerbait products, you know they stink—literally. Your hands might smell like a fish market when you get done rigging your Power Worm on the hook, but that’s actually a good thing in my opinion.

I’m not a biologist, but I don’t believe scent makes bass bite. I could be wrong, but that’s just my opinion. I do believe, however, that scent makes bass hold on longer and can definitely increase your hookup ratio.

In my experience with the Power Worm, it seems as if the bass hold onto it for an extended period of time. Often times bass will knock the stew out of a big worm and drop it, but I don’t really have that problem with the Power Worm. When I feel the bite, I’ll keep a tight line to “make sure” they’re still there and very rarely do they let go.

I was taking care of some bathroom business a few weeks ago and like any true angler, I stuck the rod in my armpit—don’t laugh, we’ve all done it—and did what I needed to do. When I got done and reeled up my slack, there was a darn 4-pounder swimming zigzags all around my boat. She didn’t seem to mind the Powerbait scent.

I’ve really enjoyed the color consistency in each bag of Berkley 10-inch Power Worms. I believe small differences in flake color can make a big different when fishing in clear water situations, so it’s important to me that my soft plastics colors are consistent.

I haven’t needed to dig around in each Power Worm bag looking for a similar color. They’re all identical so I can just blindly grab another one, thread it on the hook and keep fishing.

This worm may not look like much, but I can tell you one thing without a doubt—it catches the heck out of bass. Whether you like to flip and pitch shallow cover or cast to offshore structure, the 10-inch Power Worm is definitely worth a try. It’s worked in a plethora of situations for me and I think you’ll have a lot of success with it.

The Berkley 10-inch Power Worm is available at