Fishing tackle manufacturing is in an evolution. A different shimmy or shake, a different noise, a bait within a bait, a deep diver, a scale pattern, a finesse bait, a loud one, a quiet one, a wild shape, a subtle oneâ€¦ what’s next?

Recently I ran across an odd looking contraption that at first blush looked like a buzzbait-bladed anteater called the Arbogast Buzz Plug. Although I’ve never seen anything like it and it may look a bit different, its versatility as a topwater plug is simply amazing. I’ve been fishing with it for several months with a lot of success.

A buzzbait you can pause

Buzzbaits are incredibly effective lures this time of year but there’s one small problemâ€”they sink if you stop reeling them. As a result, you’ll experience a lot of short strikes over time.

The Arbogast Buzz Plug, however, gives you the best of both worlds. Although it makes a bunch of commotion just as a buzzbait would, you’re able to stop it in strategic places throughout the retrieve. Whether you’re pausing it in grass holes or underneath overhangs, you can keep it in the optimal strike zone for an extended period of time.

This has proven to be a great producer when I’m getting short strikes on buzzbaits. I’ve had a lot of success by burning it across the surface, twitching it like a topwater and even slow-rolled around grass lines and submerged stumps. 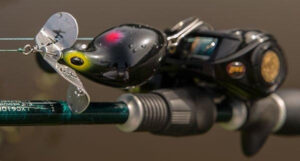 Whether you’re a bank angler or boat angler, you’ll be able to appreciate the castability of the Buzz Plugâ€”if you’re not careful, it can almost spool the line off of your reel. Its bulk and weight give you two specific advantages.

I love to fish from the bank from time to time and the Buzz Plug has really extended my range, or the amount of water and cover I can dissect from my limited bank fishing areas. With any rod, I can chunk it a ridiculous distance and effectively fish areas of my favorite ponds I always deemed “unreachable”.

The excellent castability has also allowed me to stay far away from very shallow cover whenever I’m fishing from my boat. Anglers often underestimate how skittish shallow water bass can be, resulting in spooked fish and fewer bites. If I know the bass are shallow, I can keep my distance easily and wing the Buzz Plug in there with no trouble whatsoever. 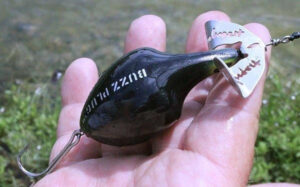 I had the opportunity to spend time in the boat with FLW Tour pro David Dudley and he reflected on the time he first saw the Buzz Plug.

“We were testing new products and had gotten down to the last several new baits,” he said. “They wanted us to fish each one and catch a fish or two on them. I told them they had better have good batteries and a lot of time on their cameras if we were going to catch anything on the Buzz Plugâ€”but man, was I surprised. I caught 4 of the biggest fish of the trip on it and a couple giants over 8 pounds.”

At that same event Bobby and Billy Murray talked Buzz Plug the whole time. They mentioned how many big fish they had caught on it and showed me the new smaller version that is available today too.

The Buzz Plug does come in two sizes, the regular Buzz Plug and the Buzz Plug Jr. and it comes in 6 colors. For lakes in my neck of the woods, black and rat are my two favorite colors. I typically both sizes on 65-pound braid and use a stiff 7-foot rod that has a tip with good action.

If you’re looking to show the bass something they probably haven’t seen, check out the Arbogast Buzz Plug. It’s versatile, castable, catches big ones and it holds up excellently to constant abuse!