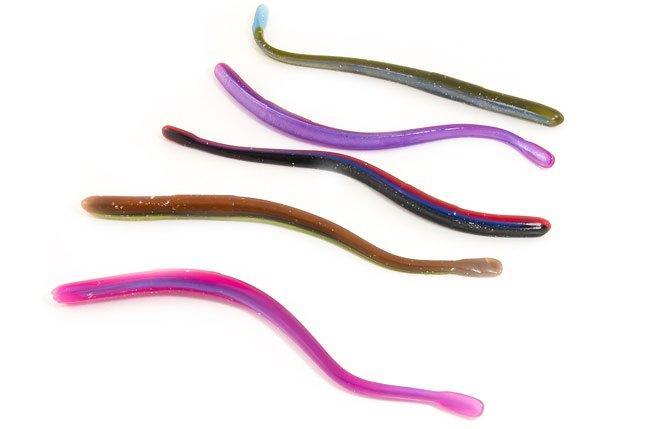 The Roboworm Straight Tail Worm might hold the unique distinction of having caught more bass in recent years in professional tournament fishing than any other single manufactured bait. At least you would think so with the amount of anglers seen with a spinning rod in hand fishing away from the bank in these later season tournaments.

The bait is one heck of a fish catcher there is no doubt. It’s such a simple design but there is a lot that makes a Roboworm Straight Tail such a dynamite fish catcher. Here are the characteristics that make it a great worm:

The Roboworm began as a homemade hand pour more than a decade ago and has blossomed into arguably the most popular finesse soft plastic worm on the market. The ability to use a very soft but durable plastic with the right amount of weight and size has made this a top choice among all tournament anglers for the last several years on the professional tournament trail.

You can nose hook the worm, texas rig it, wacky rig it on a drop shot and even put it on a shaky head with great success. But a dropshot is where the bait really shines.

They offer this worm in 4.5, 6 and 7-inch sizes and the plastic they use makes the bait very effective in all three sizes. You can choose the profile you want in the water or maybe try to match smaller forage in much clearer waters.

Some of the best colors in soft plastics

I believe part of the Roboworm’s mystique among anglers comes from the unique triple and double shot colors they offer. Sure a simple color like Morning Dawn dominates the storage boxes of many pros, but colors like Margarita Mutilator, Bold Bluegill, Aaron’s Magic and Ehrler’s Edge are great fish catchers in their own right.

I think the colors, while sometimes bold and different from the other plastics in an angler’s tackle box, look very natural to the fish. And in the end that’s all that really matters.

Typically I’m rigging these worms on very small hooks. Usually an octopus style hook or 1/0 Gamakatsu Rebarb hook (specifically designed for the Roboworm) for Texas rigging it on a drop shot rig. I have fished them on a shaky head, but found, day in and day out, that the drop shot really excels with this worm.

The one downfall I would say would be nose hooking these worms. When you nose hook the worm, the action is beautiful but when the bass bites it and jumps one time, the worm flings off and you’re reaching for another. So it’s one thing to consider. I’ve found with the Texas rigged hook the worm seems to hold a little better.

But that’s a trade off most anglers are willing to live with to get a lot of bites on this finesse plastic.

What I think sets this worm apart from many of its competitors is the action of the Roboworm Straight Tail, especially on a drop shot rig where the angler imparts little to no action. I’ve looked at it in a pool. When you try to hold it still, the worm will still slightly vibrate and undulate in one place like I believe a live bait would do when it’s just hovering just off the bottom.

I tell folks that I take drop shot fishing with me to just try to hold their rod still. Maybe let off the tension and let it sink slowly for a second and then just pull their line tight and try to hold it a few seconds. Then pull it along about a foot or two and repeat.

The natural currents and wave action make this look very natural in the water without any action imparted by the angler.

The worms are priced very reasonably. You can get a 10 pack (8 pack on the 7-inch) for $3.79 at Tackle Warehouse ($3.49 for the 4.5-inch). As far as what colors you should start with. I recommend getting a light color like Morning Dawn, a dark color and then maybe some variations of greens and browns to see what colors work best in your favorite waters.

The Roboworm is a staple in competitive bass fishing and it should be a staple in your tackle box for just catching bass consistently. 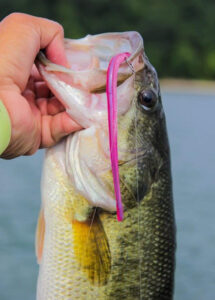