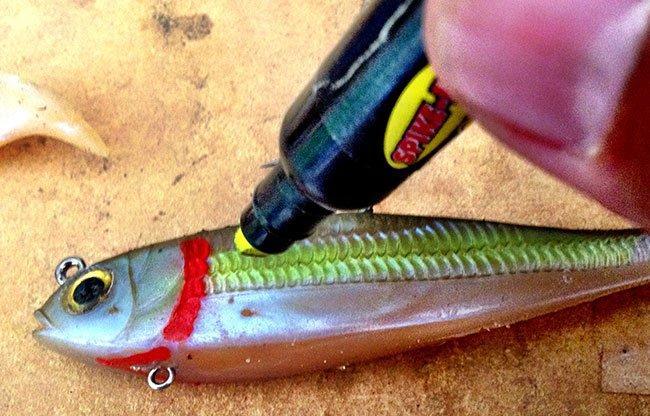 One thing we’ve learned from a multitude of pros over 20 years of being around hardcore bass anglers is that they very rarely use anything as is straight out of the package. Many will claim it’s a competitive advantage on their adversaries, namely the bass and maybe a few “out-of-the-package” anglers. Some will say it’s just a confidence thing. That changing hooks, changing the color or adding scent just gives them more confidence.

I tend to take a more practical approach when customizing and tweaking lures to get the most out of them and it’s simply boils down to one clear fact. Manufacturers must cut out as many steps as possible to mass produce baits that not only look good to an angler but also catch fish. But they have got to keep their price points down. So what you often get with certain baits is a limited palette of natural color to a bait mimicking lure.

Take a swimbait for example. Now the hand-carved, hand-painted hard baits are something to behold, and they often come with some sort of beholding price.

However their soft bait cousins often lack a bit of bling. That’s where a few markers and some glue can come in handy. I’ve grown very fond of throwing the Berkley PowerBait Swimshads. They used to only make the saltwater variety, but they’ve since made a freshwater version. Either one has worked often and well for me in many different fishing locations. But your colors are pretty limited.

The first thing I do before tying one on is making sure it’s eyes will stay on. So I pull them off. Yep first thing I do is tear up my swimbait. For some reason the eyes are always the first thing to go.  I will super glue or marine glue the eyes on being sure to cover the backs and around the seam to keep them on for a lot longer

The next thing I do is take a chartreuse die pen or a q-tip dipped in a chartreuse die and paint a chartreuse stripe. If you’ve pulled shad out of the water and looked at them and bent them around in the light, you often see an iridescent flash. I liked the added chartreuse line there to break up the otherwise plain sides. A baitfish looks white from a distance but it changes colors as it bends in the light. So I add a little change to the bait.

The next thing I think can be a bite trigger is blood from the gills. I take a red paint pen and I will paint red gills in a very natural looking way on either side of the swimbait and also sometimes to the throat of the bait. I feel that a fish that follows and then notices the gill red is more apt to commit than a bait that looks uniform all the way down the body. Again breaking up the profile and the silhouette a little in the process. 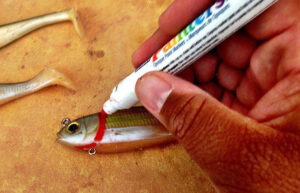 I often check my swimbaits and sharpen or retie the Mullets if the hooks get dull. Some guys will tie a short piece of braid to the shank and add a small stinger treble on the back. I actually opt not to do this because I’ve seen some bad gill hooked bass when they are really choking the swimbaits. So I’d rather not take that chance and will go without the stinger.

So with a few seconds of work you can make an already good swimbait even better. Obviously the manufacturers could do this but it would raise the price and maybe not every angler likes this design. That’s the great thing about fishing tackle. We can tweak the lures to the way we like to fish or the types of water we like to fish. 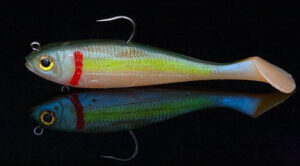 For swimbaits with the lead molded into the heads already. I will retrieve them on the  bottom like a slow rolled swimbait. I call it chasing the bow. I will reel the bait and allow for small pauses in my handle turn and watch my line bow slightly and occasionally go limp, signaling it’s still right near the bottom. So I keep the line tight to semi-tight and just try to ease it just over the rocks, grass, shells and other bass attracting cover.  When a bite occurs you have to discipline yourself not to jerk until you feel the rod load. They will often peck and slam the swimbait trying to kill it. A good bass will keep after it until he has to eat it so be patient. When the rod starts to load, drive the hook into them and keep reeling.