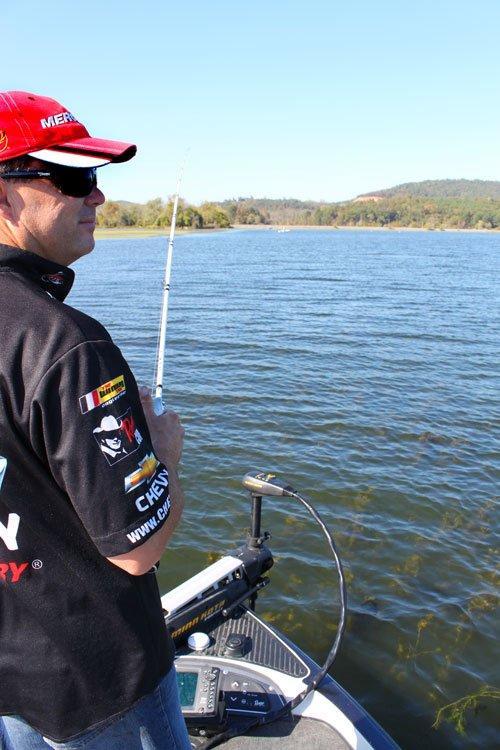 When shad hit the shallows of grass laden lakes, we sometimes have trouble extracting the bass in a timely fashion. Flipping is an option but painstakingly slow. Topwaters are great if the bass will commit to them but hit or miss throughout the fall. Spinnerbaits can do the trick, but wind and cloud cover is usually needed. There just aren’t a lot of baits that you can use to cover water, below the surface and above the grass.

Chevy pro Jay Yelas will choose a hollow-bodied swimbait in this situation. He had a hand in designing the Berkley Hollow Belly a few years ago and used it to win the 2007 FLW AOY title shortly after its inception. Nowadays he doesn’t leave home without it and has become quite fond of fishing grass with it in the latter months of the year.

You need two things in order to catch fish on a swimbait in the fall — fairly clear water and baitfish. Color choice is pretty standard. Two key factors, clarity and primary native forage, determine which of three 6-inch Hollow Bellies Yelas will employ. His go to and best all-around color is Gizzard Shad. When on lakes with blueback herring, he’ll switch to the aptly named Blueback Herring Hollow Belly.

At least 2-foot visibility is needed for Yelas to fish a swimbait, and if he’s in dingy water that is treading the line, he will throw a Pearl White color. The glow the pearl gives off adds that little extra to draw the bass in when fishing the dingier end of the spectrum.

Swimbaits do have a few drawbacks. Due to their subtle action, they tend to lose their effectiveness in stained or muddy water. A little chop on the water is preferred when swimbaiting, but too much wind will stir up particles from the bottom and ruin a swimbait bite. Although grass will filter some of the particles out, too much wind can really ravish an area making it unfishable with a swimbait. In these type situations, Yelas just heads for calmer waters.

“You can try switching to a spinnerbait or squarebill, but over the course of my career, I’ve found when the wind blows really hard and turns the water color, you’re better off hunting protected water where the fish are a little more catchable,” Yelas said.

Flat water is vital in the fall in reference to the contour of the bottom. Yelas stays away from vertical drops and bluffs. Points in the grass can be good but the real trick is finding the section of the grass where the bass can get the upper hand. The fish will work the edge of the grass until they can coral the shad in a pocket. Any indention in the grass helps the bass put the baits’ collective back to the wall and snack on a shad shmorgishborg.

Drains and depressions that are carpeted in submerged grass can provide great places to collect bait as well. The best bet is to keep an open mind and an eye out for the obvious signs of bait. But if you can spot an area that looks like it has potential, be sure to come back in search of the shad later on.

Two tools that Yelas relies heavily on when swimbait fishing are his Humminbird electronics and Typhoon Sunglasses. Both can be used to find bait and submerged grass that is invisible to the naked eye, especially in cloudy or slightly windy conditions.

Although there are a lot of ways to rig a swimbait, there is a clear front runner when fishing grass according to Yelas. A stinger or trailer treble hook is more of a problem than it is productive due to hanging the vegetation. Since jig heads have exposed hooks coming through the back of the bait, you end up with the same song just a different verse. The key is texas rigging the bait.

The best presentation is slow and steady when fishing in the grass. Yelas has tinkered with twitching and pumping swimbaits like other shad imitations but is a firm believer that slow and steady wins the race. There is nothing to be gained from an erratic action since working the bait in such a manor only detracts from the action of the paddle tail. But don’t go to slow.

“If you wind it too slow the tail won’t kick. Just make a short, 10-foot cast, off the side of the boat and find the right retrieve speed to where the swimbait has the most action. Then you want to keep that same retrieve speed all the way back,” said Yelas. 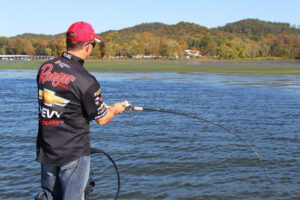 Line type is always Berkley Trilene Fluorocarbon but the line size varies depending on the depth Yelas is fishing. If he is targeting grass that is 4 feet deep, he’ll drop back as light as 10-pound test. The majority of the time, when fishing a foot or two under the surface, he will go with 15 to 17-pound test. Fluorocarbon is crucial not only for its strength and low visibility but also because it sinks. The sinking line helps keep the swimbait down which Yelas believes to be one of the most important parts of the equation.

As for the rest of the math, add the bait, add the location, subtract the muddy water and you are good to go. Rig your swimbait as weedless as possible and plug away along the edges, pockets and points. Look for depressions and ditches with submerged grass. Keep a slow and steady retrieve, and it shouldn’t be long before the bass are ripping the pole right out of your hands, at least that’s the idea.

As for the recent Alabama Rig craze, Yelas had his own experience. He used a single Berkely Hollow Belly to net 11-03 and 18-06 on days 1 and 2 of the Walmart FLW Tour Open on Guntersville. He made his first cast with the Alabama Rig with 5 Hollow Bellies midway through the event and added 21-08 and 18-01 respectively on the final two days.

He primarily fished the same shallow grassy area in Town Creek throughout the event. He stated that he has been fishing competitively for a long time and the way the Alabama Rig took over the event was by far one of the most amazing things he’s ever seen. It was unbelievable to see how much better the fish would strike the school of swimbaits over the lone swimbait.