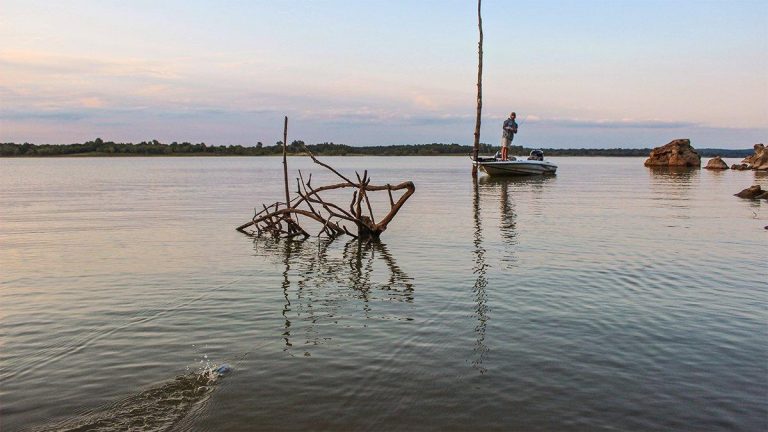 Bass fishing in the dog days of summer is no easy pursuit. Catching bass in lakes and reservoirs becomes increasingly difficult as the summer wears on; to the point it gets hard to believe the fisheries have healthy populations of bass.

Whether our pride allows us to admit it or not, there are still thousands of fish swimming around—they simply get tough to catch. Rivers and northern fisheries can be an exception, but for the most part it’s hard to catch bass in most reservoirs by the time late July arrives.

Fortunately, finding and catching bass is not impossible this time of year; you just have to embrace the grind a bit. I’ve been milking two productive patterns the past month here in my area that will help you catch more bass regardless of your skill level.

Cover water with a topwater

Whether you’re targeting schooling fish or individual bass along the shoreline, a topwater is hard to beat under the right conditions. My efforts are predominantly focused on fish relating to the bank. There are still lots of big bass shallow this time of year; they just aren’t easy to catch.

Make long casts parallel to the shore, next to isolated cover, across shallow flats, around floating docks, or anywhere else you think a bass is hiding. Staying close to the main lake or in major creeks has been most effective for me this time of year. The key is to cover water, and lots of it. As well as paying attention to the conditions, timing is everything for a late-summer topwater pattern.

Unless it’s a rainy or overcast day, the first three hours of light in the morning and the last two hours the sun is up in the evening are the only times I’ll rely on a topwater in August or September. After the sun gets up, it becomes more difficult to trick bass into reacting to this presentation. This topwater bite only gets better as temperatures start to cool and fall settles in.

For this pattern I’ve employed a River2Sea Whopper Plopper (130 size) or a 3/8-ounce War Eagle Buzz Toad. Both of these lures are extremely easy to cast and assist in covering as much water as possible. Keep the trolling motor on 50 percent power or higher, maintain focused and keep moving. You’ll run into a few bass and you’ll be shocked at how aggressive they can be even throughout the hottest part of summer.

Always have a weightless Fluke or stick worm soft-plastic rigged and at the ready when fishing with a topwater bait. While the strikes are aggressive, bass may short strike or miss the lure altogether. It’s rare to have bass react to a fast-moving topwater lure on back-to-back casts in late summer. Having a follow up bait at the ready will help you catch those fish.

This is a lesson I re-learned the hard way in a recent evening jackpot derby. I had seven different bass blow-up on my Whopper Plopper in short order as the sun dipped below the horizon but only put one of those fish in the boat. It was a three-fish limit and I ended up only weighing in two quality bass that landed me fifth place. Had I rigged a soft-plastic follow-up lure the outcome could have been very different. 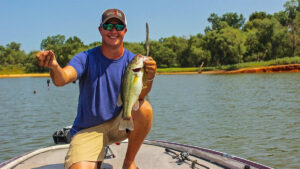 By the time late July rolls around, offshore schools of bass have been heavily pressured by other anglers and are dealing with hot water temperatures. It’s rare to maul a school of fish burning a deep-diving crankbait under these conditions. This time of year I’ve found fishing slow with soft plastics to be most productive.

There seems to be two schools of thought when fishing soft plastics offshore in late summer. Anglers have success with finesse offerings, or by doing the exact opposite and going big. The recent FLW Forrest Wood Cup on Lake Ouachita was a perfect example.

FLW Tour rookie Wes Logan went into the final day with the lead, catching most of his fish drop shotting offshore brush piles. Finessing bass into biting by going small. On the contrary, Clent Davis went on to win the 2018 Forrest Wood Cup by catching offshore bass relating to brush piles with a 12-inch worm on a 1/2-ounce swing head jig. They were both targeting the same type of structure with a bottom-contact presentations, but their bait choices were quite opposite. 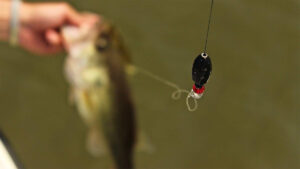 I’ve been having success by going big and bulky when dragging offshore. A Carolina rig with a 1 to 1 1/2-ounce sinker and two to three glass beads has been my go-to. I want to make as much commotion as possible as I’m dragging my bait around. The bass have seen a 1,000 worms and jigs already this summer, but the heavy weight and glass beads kick up the bottom and make a lot of noise, getting the bass’s attention and giving them a different look.

Sticking with the “going big” theme, I’ve kept the leader length close to three feet long on the Carolina rig and my soft plastic choices are bulky, too, dressing the ball and chain with a full size Zoom Brush Hog or a 10-inch Berkley Power Worm. While bass aren’t in the best mood this time of year, they still have to eat. A hefty soft-plastic represents a substantial meal to a bass as it knocks around and is too good to pass up.

While the fishing may be tough in late summer, there are still bass to be caught, and you can’t catch ‘em from the couch. Wake up and head to the lake early this weekend. Start your morning looking for a few aggressive fish with a topwater and drag a sizable soft plastic in the afternoon. Techniques like these two will help you catch some fish or at the very least, get you started in the right direction.